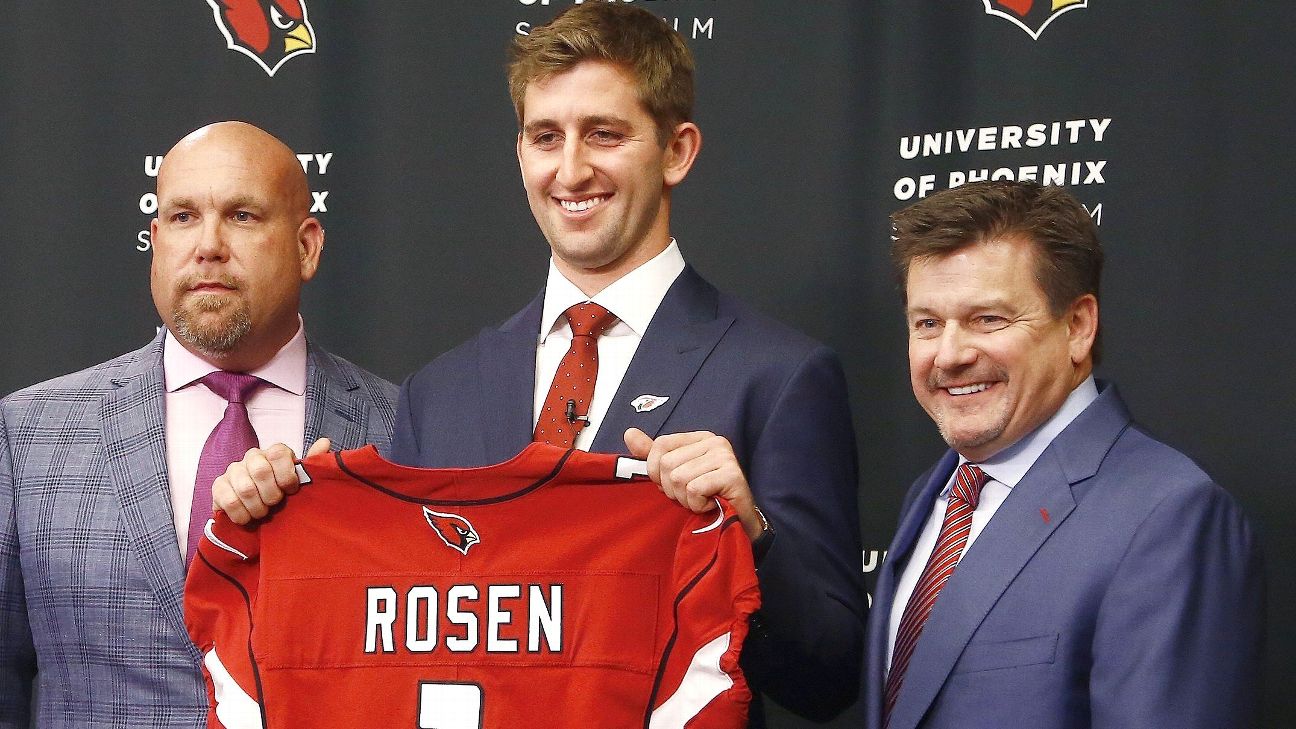 TEMPE, Ariz. -- A calmer Josh Rosen took the podium for his introductory news conference with the Arizona Cardinals on Friday, walking back one of his comments from a charged draft night.

"I was a little emotional last night," Rosen said Friday.

During a post-draft news conference in Dallas, Rosen said "there were nine mistakes ahead of me." On Friday, Rosen said that he didn't mean to include in that remark the six non-quarterbacks taken, and added that there were only "three mistakes" taken ahead of him, referring to quarterbacks Baker Mayfield, Sam Darnold and Josh Allen.

"I would actually say that I'm not as angry that there were nine guys ahead of me, just three quarterbacks," Rosen said. "That's kind of what gets to me. So, there were three big mistakes ahead of me, but honestly, it's a blessing in disguise. This is an incredible team that I think is really, really primed and set to do some incredible things in the future, and I think I just, very simply, lucked out."

Rosen donned a navy-blue suit with a white shirt and red tie as he gave a brief statement and then answered questions. Rosen, whose frustrations with sliding to 10th came through during his interviews Thursday night, ended his opening statement by saying, "I don't have too much to say."

Rosen doesn't think his outgoing personality will hinder his ability to make a smooth transition to the Cardinals' locker room. In fact, he believes it'll help.

"I think that's probably the unique reason why I get along with my teammates very well, is because I'm me," Rosen said. "Who I am at this podium and how I'm talking to you is the exact same way I'm talking to my teammates, my family, everyone.

Rosen plans to wear No. 3 with the Cardinals, which was worn by Carson Palmer for the last five years. Rosen said Friday the one misconception of him that he wants to put to rest is a lack of a passion for football. He had to repeatedly answer questions from teams on the topic, adding that he felt he had to keep coming up with answers to convince teams he loved football.

"I coached receivers in Carolina back in the day, and being the coordinator plenty of places, there's plenty of people that have opinions, and everybody's got an opinion, and I got no problem with that. There's going to be a way we're going to do it here, and I'm fine with it."

Rosen only upset about QBs taken ahead of him
Josh Rosen corrects his draft night comments by saying he's only upset about the three quarterbacks that were taken ahead of him.
Report a correction or typo
Related topics:
sportsespnarizona cardinalsjosh rosennflnfl draftucla bruins
Copyright © 2021 ESPN Internet Ventures. All rights reserved.
More Videos
From CNN Newsource affiliates
TOP STORIES