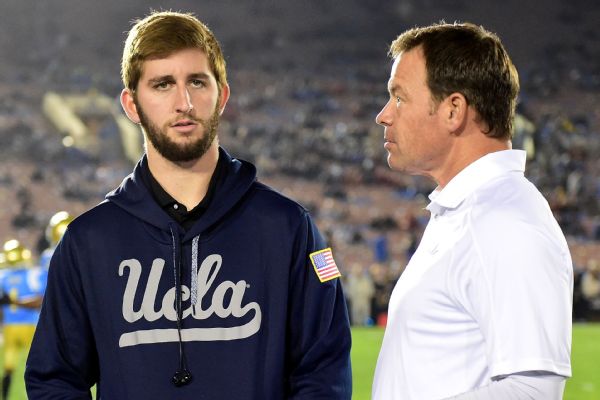 LOS ANGELES -- If there's one thing UCLA quarterback Josh Rosen has been able to count on in his three seasons with the Bruins, it's that he would have Jim Mora in his corner.

Two days after Mora was fired as the Bruins head coach, Rosen made it clear just how much the relationship meant to him.

"Pretty much everyone in this building is here because of him," Rosen said. "We all are forever indebted to him."

"He's helped me grow for sure and get closer to becoming a man. I've made a lot of mistakes and he's always been by my side and I think a lot of people maybe wouldn't, so it's not just with me, it's for everyone on the team."

Rosen, like most in the UCLA program, was surprised by athletic director Dan Guerrero's decision to fire Mora, but he made it clear the team is still chasing a bowl appearance that would come with a win against California on Saturday.

From the outside, however, the lower-tier bowl the Bruins are still in contention for doesn't carry nearly as much intrigue as how the next several months will play out for Rosen -- starting with his looming decision on whether to declare for the NFL draft.

It's widely assumed that Rosen, who is viewed as a potential No. 1 overall pick, will leave UCLA following the season, but he has yet to publicly provide a definitive answer. Asked if Mora's dismissal will factor into his final decision, Rosen acknowledged there are several factors that weigh in.

"I haven't really talked to my family about that yet," he said. "That'll come in the near future, but I mean everything matters when it comes to a decision like that, so I'll take all the different sorts of variables into the equation, but not quite yet."

UCLA is 16-13 in games Rosen has started over the last three seasons, which is a clear source of frustration for a player who arrived at a program that had won 29 games over the previous three season under Mora.

"It's kind of disappointing because I feel like you come into program and it's 10-2, 10-2, 9-3 and you're doing any and everything you can and you just can't produce the wins that you want to and it's really a bummer because I'm giving everything I have and then some," he said. "To come up on the short side of it time and time and time again, it's disappointing. Our scholarships are guaranteed, but our coaches' contracts aren't."

The Bruins amassed 501 yards in a 28-23 loss to USC on Saturday, during which Rosen had one of his best games of the year. He completed 32 of 52 passes for 421 yards with three touchdowns, but threw a costly interception in the end zone.

It was UCLA's third straight loss to USC and makes the question worth asking: Had UCLA beaten USC on Saturday, would Mora still be the coach?