Josh Shaw to play vs. UCLA 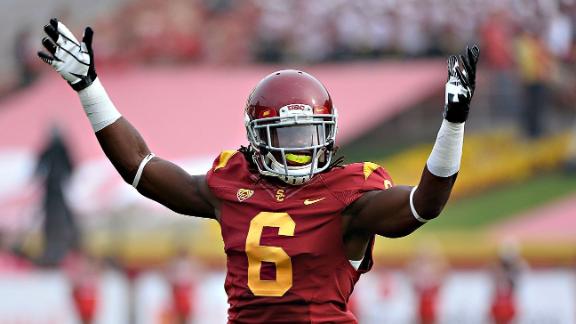 The USC Trojans are getting a potentially valuable reinforcement ahead of this weekend's massive clash against the UCLA Bruins.

Coach Steve Sarkisian said cornerback Josh Shaw, who missed the first 10 games of the season after lying about how he sprained both of his ankles, would be available Saturday in some role for the Trojans (No. 19 CFP, No. 24 AP).

Sarkisian didn't indicate just how much he expects Shaw to play against the Bruins (No. 9 CFP; No. 11 AP), but he did note that the fifth-year senior has not appeared rusty in his first week back at practice.

"He's an experienced guy, he's played a lot of football, so he's able to grasp things quickly," Sarkisian told the Los Angeles Times. "His muscle memory of how to align or how to move out of a certain break isn't as difficult for somebody who is new to doing it."

The 6-foot-1, 200-pound Shaw owns six career interceptions and is USC's most physically imposing cornerback. If he is indeed able to significantly contribute by Saturday, the Trojans could be in for a big boost against the explosive, up-tempo UCLA offense led by Brett Hundley.

Shaw can also play safety -- he started three games there last season on top of 11 contests at corner -- so his versatility is a potential asset for a USC defense that has worn thin as games have progressed. Still, the Trojans are wary of the difficulties that Shaw may face trying to reacclimate to game conditions.

"As much as this is our 11th game -- it's his first game," Sarkisian told the Times. "So we'll just monitor him pregame and all the way through."

Shaw, who'd been elected a team captain, sprained both ankles jumping from a balcony after a "heated argument" with his girlfriend just days before the 2014 season kicked off. He initially claimed he was hurt jumping from a balcony trying to rescue his drowning nephew. USC posted the story of heroism on its official football website, and it gained national attention before Shaw admitted it was a fabrication.

Last week, the Los Angeles County district attorney's office concluded there was insufficient evidence to prosecute Shaw after investigating the argument, and Sarkisian reinstated him to the USC team Tuesday.

Shaw worked at cornerback and special teams during his first practice Wednesday.