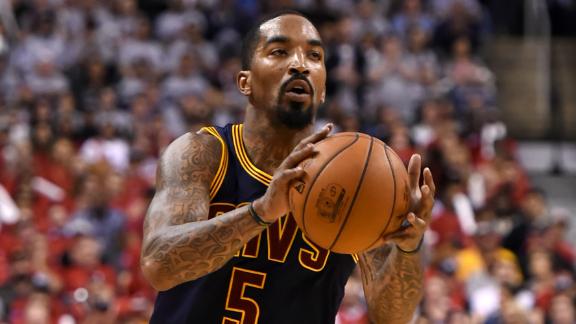 Shooting guardJ.R. Smith will not attend the Cleveland Cavaliers' minicamp this week in California as he and the team remain at an impasse in contract talks, sources told ESPN.com.

Cavs players and coaches are gathering for workouts for several days this week in Santa Barbara ahead of the start of training camp next week. The session is meant to create camaraderie ahead of the season. Last year, the team gathered in Miami for a camp that helped launch their eventual championship season.

Smith's agent, Rich Paul, and the Cavs have been in a standoff since July, when Smith opted out of his contract. No recent progress has been made in the talks, sources said. Smith, who played a significant role at both ends of the court, is seeking a multiyear deal.

Smith is focused on returning to the Cavs -- and the team wants him back -- but Smith likely won't hesitate to miss part of training camp to see if his leverage changes. Other teams currently have cap space, and events in the preseason can change the situation. Last season, the Cavs were at an impasse with Paul andfree agent Tristan Thompson that saw Thompson miss all of the preseason before coming to terms.

The Cavs have had free agents miss the entire preseason in contract stalemates three times since 2007 --Thompson, Anderson Varejao and Sasha Pavlovic -- while Dan Gilbert has owned the team.

Over the past two summers, the Cavs have locked up nearly every player on the roster to rich, multiyear deals -- including four-time MVPLeBron James, who signed a three-year, $100 million deal this summer. Last September, Smith bet on himself by agreeing to a deal that was only fully guaranteed for one season at $5 million.