Julius Randle on Isaiah Thomas argument: 'Trying to bring the best out of each other' 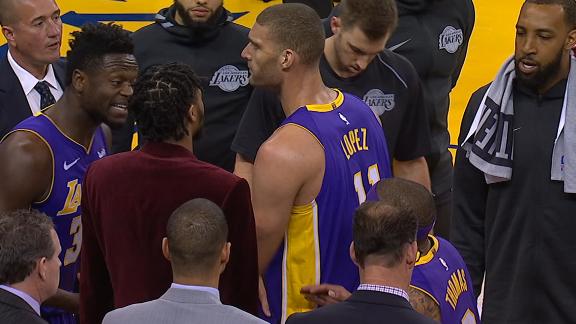 OAKLAND, Calif. -- Tired and undermanned, the Los Angeles Lakers found themselves fighting with one another at one point during their 117-106 loss to the defending champion Golden State Warriors.

Julius Randle and Isaiah Thomas, the latter making his first start as a Laker, had to be separated by 7-foot center Brook Lopez in front of the team's bench during a timeout in the third quarter.

Lopez and rookie Lonzo Ball tried to calm an agitated Randle down. Cameras caught Thomas appearing to be explaining his side to Randle.

"I didn't see what it was about; I like it though," Lakers coach Luke Walton said. "I told them afterward, I love it. As long as they're open-minded and whatever they were arguing about, they get it figured out. We have been trying to get our guys to talk [on defense] all year long and if it is a heated conversation, that means it is two people that are passionate about something and we will take that on our team any day."

The two Lakers, who have been developing an on-court chemistry on offense together since Thomas was traded to the Lakers on the trade deadline, appeared to hash things out. They sat next to each other and played together after the episode before Randle fouled out with 3 minutes, 18 seconds left in the fourth.

"Ah, man. It was great, honestly," Randle explained when asked what happened. "We expect a lot out of each other and it was just communicating, man. We want to win, we expect to win these games and we expect each other to play at a certain level, so it was just us being teammates. There's nobody I'd rather go to war with than IT. So it's nothing personal, we're just trying to get the best out of each other and win the game."

The disagreement started on the court at some point and spilled over to the bench. Randle and Thomas would not go into detail about what started the argument.

"Yeah, man, that's my dude," Randle later added when asked if they talked things out in the locker room. "He's been great since he's came in. Like I said, it's nothing personal, man. We're just trying to bring the best out of each other and push each other."

Thomas, who was inserted into the starting lineup with Kyle Kuzma (sprained ankle) ruled out before the game, has been praised by Walton for being a vocal leader and not being afraid to point out where his younger teammates need to be and what they need to do.

"Nothing," Thomas said when asked what happened with Randle. "Just two basketball players competing. That's all it was. Happy to be yelling. ... We want the best for each other, we just want to win. We're two leaders on the team that we're competing on and it was a misunderstanding at one point and we talked about it and we're good. As teammates should."

"I'm a leader," Thomas later added about how the younger players have taken to his vocal leadership. "It's not me getting after anybody, it's just me leading. If I see something, I'm going to say something, that goes vice versa, if they see something they should say something. That's just how it's supposed to be on a basketball team, so there's no calling nobody out, no getting on nobody, just doing what's best for this team."

With Kuzma, Brandon Ingram (groin) and Josh Hart (hand) out, Randle had 22 points and 10 rebounds while Thomas scored 20 points and had seven assists. Lopez had 20 points but the Lakers looked tired after grinding out a win over Denver at home the night before.

Afterward, the Lakers acted as if any beef between Randle and Thomas had been squashed and the team was better off for the heated moment.

"Sometimes, it can definitely turn into something bad," Walton said. "I don't think that was the case with us. For now, where we are coming from and where we are trying to go, we've had a history of guys internally getting mad and not expressing themselves about certain things. I much rather them voice their opinions to each other, let's get it out there and talk about it, grow from it."

Added Ball, "It has a positive and negative affect depending on how the guys are arguing and going about it. If they are arguing and it messes with their heads, then obviously it is negative. But if it starts a spark and they hash it out and get back on the court and play even harder, then it is a positive.

"Tonight they figured everything out. Obviously we didn't get the job done [with a win], but it didn't really mess up any of the locker room stuff."