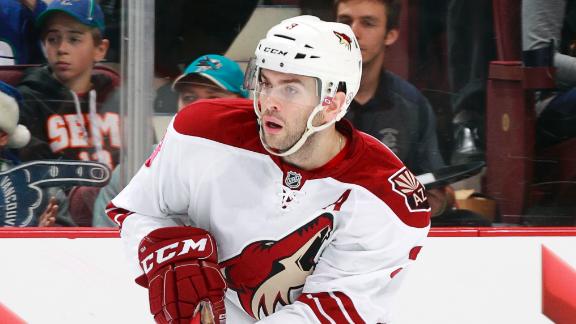 With less than 24 hours until the NHL trade deadline expires, the New York Rangers and the Arizona Coyotes combined for one of the biggest deals of the season Sunday afternoon.

"It's very simple: The only way we could do a deal with the Rangers given their cap situation was to retain salary," Coyotes general manager Don Maloney said. "That's the reality of the world we're living in. We would not be doing this type of deal if we were acquiring a 33-year-old player, but when you talk about a 19-year-old potential first-line winger and a couple of other high-draft pick assets, you realize it's going to cost you some money to make this type of deal."

Yandle has long been a trade target for teams looking to add veteran skill and scoring ability on defense. The 28-year-old Yandle, who leads the floundering Coyotes in scoring with 41 points, also addresses a long-standing need for the Rangers in providing a legitimate quarterback for the team's power play.

Yandle, who has played his entire career for the Coyotes organization, has one year remaining on his current deal and is due $5.75 million in salary next season.

"We're resetting this team," Maloney said. "We're gaining assets that in three, four, five years will put us in position to win the Stanley Cup."

The Rangers currently are second in the Metropolitan Division, trailing the rival New York Islanders by two points, although they have three games in hand.

Rangers general manager Glen Sather has been active in the days leading up to the trade deadline, exploring the market for Mats Zuccarello, who was set to become an unrestricted free agent, on Saturday after talks between the team and Zuccarello's camp broke off.

However, the two sides resumed discussions and agreed to terms on a four-year, $18 million contract extension late Sunday night, a source confirmed to ESPN.com.

The Rangers weren't done after adding Yandle, completing a pair of separate moves. They traded forward Lee Stempniak to the Winnipeg Jets for Carl Klingberg, a source told ESPN.com, and added James Sheppard from the San Jose Sharks.

New York will send its own fourth-round pick in 2016 (not the one acquired in the Yandle trade) to the Sharks in exchange for the veteran forward, while San Jose has agreed to retain $100,000 of Sheppard's salary.

Information from ESPN.com's Pierre LeBrun and The Associated Press contributed to this report.