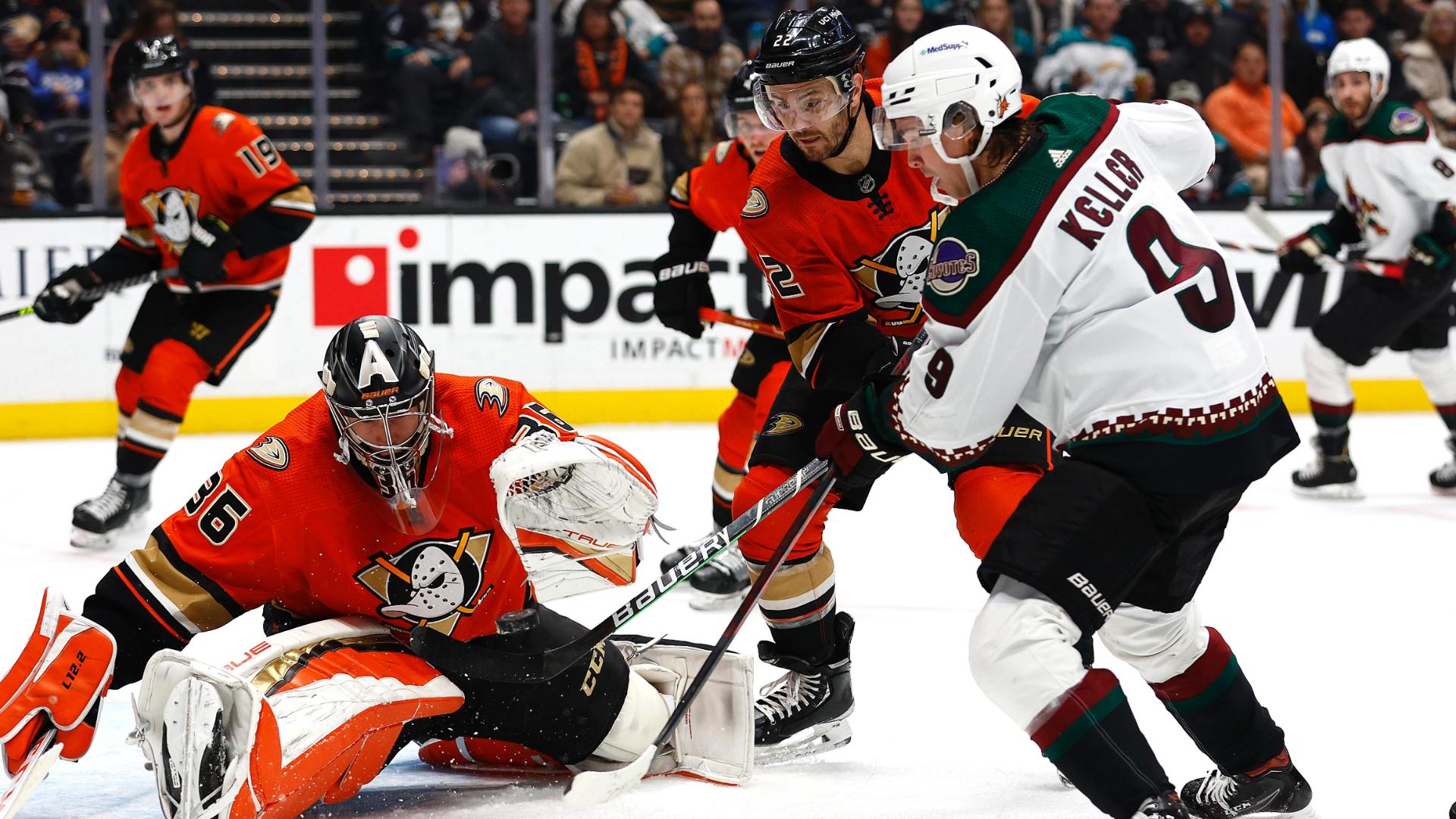 ANAHEIM, Calif. -- - Clayton Keller had two goals and an assist, including a wrist shot 2:09 into overtime, giving the Arizona Coyotes a 6-5 win over the Anaheim Ducks on Friday night.

Anaheim's Trevor Zegras had a chance to win it, but had his shot go off the post. Arizona quickly went down the ice and converted as Keller's shot snapped a six-game losing streak.


"It was kind of a weird play where everyone kind of didn't know where the puck was and I kind of just saw it last second," said Keller, who has five goals and 12 points in his last 10 games. "(Nick) Schmaltz makes a great play and I just tried to shoot through a screen. It was good to see that one go in."

It was the fourth overtime goal of Keller's career and his second this season. It is only Arizona's sixth win in 29 games, and its 14 points is a league low. For Anaheim coach Dallas Eakins and the Pacific Division-leading Ducks, it was a good lesson in not overlooking any team.

"I don't care if you're playing the first-place team or a team that struggles," he said. "If you give an inch, or just have one mental lapse, you can turn things the other way quickly. I think it's a great example and reminder every team in this league is dangerous."

Travis Boyd also had two goals and an assist for his first career three-point game. Phil Kessel and Clayton Keller each had a goal and an assist, and Christian Fischer also scored for the Coyotes, who were behind 3-1 less than nine minutes into the game before rallying.

Scott Wedgewood made 32 saves to snap his own six-game losing streak in goal.

"I like our resiliency and how we were able to create offense," coach André Tourigny said. "If you watched the first 10 minutes of that game it was not pretty. Anaheim was hard on us and we didn't react well. We got better every shift and bounced back."

Hampus Lindholm had two goals and an assist for Anaheim, which had won four of its last five coming into the game. Zegras had a goal and an assist, and Kevin Shattenkirk and Derek Grant also scored.

John Gibson, who had missed two games due to a lower-body injury, stopped 21 shots.


Lindholm's goals give him 57 for his career and moves him into third in Anaheim history for most goals by a defenseman. Cam Fowler is the franchise leader with 76, with Scott Niedermayer second with 60.

"I think we got away from our game a little bit there, definitely gave them a little too many A-grade scoring chances there," Lindholm said. "It was a rollercoaster of a game, I'd say."

Arizona took a 1-0 lead less than three minutes into the game on Boyd's seventh goal of the season, before the Ducks scored three times in a 2:54 span to go up 3-1 at 8:41 of the first.

Shattenkirk started the Anaheim flurry with a power-play goal on a one-timer from the left faceoff circle at 5:47. Lindholm followed 57 seconds later on a snap shot from the right circle, and Grant added to the lead two minutes later on a tip-in.

Fischer brought the Coyotes within a goal at 15:12 of the first on the power play with a tip-in, and Kellar tied it at 3-all with 34 seconds remaining in the second on a breakaway for his eighth goal of the season.

Zegras put the Ducks on top 4-3 at 2:07 of the third with a one-timer. The Coyotes took the lead on goals by Ladd and Kessel that were 66 seconds apart, before Lindholm sent it into overtime on a wrist shot while on the power play.

Kessel recorded the 58th multi-point game of his career, which ties him with Vegas' Max Pacioretty for the second-most by an active U.S.-born player. Dallas' Joe Pavelski leads with 61.

It was a chippy start to the game with two fights during the first period. Anaheim's Nicolas Deslauriers and Arizona's Liam O'Brien got in a fracas at the 2:30 mark.

Coyotes: Continue their road trip against Vancouver on Sunday. Tourigny said Arizona would remain in Anaheim until making the trip up north the day of the game.

Ducks: Travel to Edmonton on Monday.