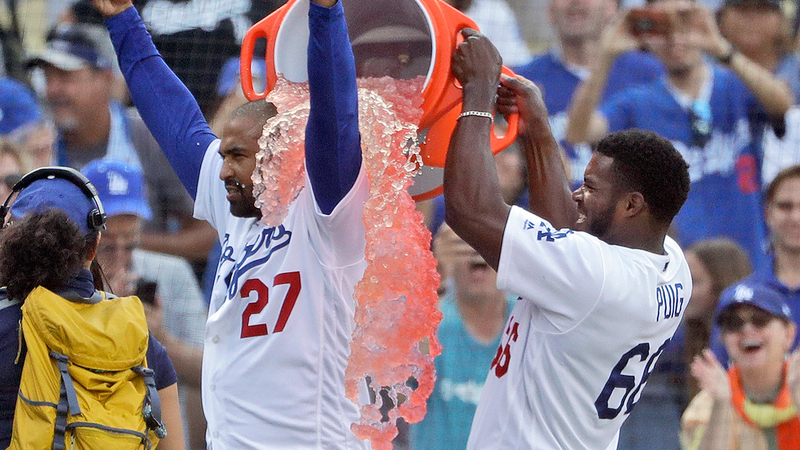 LOS ANGELES -- This was one rerun Dodgers fans were happy to watch again.

Matt Kemp beat the Diamondbacks for the second straight game, hitting a two-run double in the ninth inning that lifted Los Angeles over Arizona 3-2 Sunday for sole possession of first place in the NL West.

A day after Kemp launched a go-ahead, three-run homer in the eighth against Archie Bradley, the Dodgers slugger tagged him again on the first pitch to break a tie for the division lead.

"When I was walking up to the plate they showed what I did last night," Kemp said. "He threw a fastball that was pretty much in and I got the barrel on it and made something happen."

Kemp chucked his helmet in the air rounding second base and his teammates chased him down for a wild celebration along the third-base line.

Bradley also a message for Arizona rooters: "To our fans, don't panic. It's only one loss."

But a costly one. The D-backs dropped a game back of the Dodgers and Rockies, who beat San Diego 4-2.

The Dodgers were 4 1/2 games out of first after a loss on Aug. 22, but have gone 8-1 in their last nine games to regain the division lead for the first time since Aug. 7.

The Dodgers beat the Diamondbacks by identical 3-2 scores three days in a row, after Arizona won the series opener at Dodger Stadium.

"We had our mojo back, but this series clarified that," Cody Bellinger said.

Brad Boxberger (2-5) started the ninth and put the potential tying and go-ahead runs on with consecutive walks to pinch-hitter Alex Verdugo and Max Muncy. The runners advanced on Enrique Hernandez's sacrifice bunt and set up Kemp, who pinch-hit in the seventh and stayed in the game.

"That's why we call him Hollywood," Bellinger said. "He likes the big moments."

"I brought in Archie because I thought it would be a good spot (after Saturday's game)," Lovullo said. "He's been doing it for us all season, but Kemp has our number."

Daniel Descalso homered leading off the ninth to put Arizona ahead 2-1. Descalso went deep to center field off Caleb Ferguson with the ball just eluding Bellinger's glove as he reached over the wall.

"This loss stings a bit because we clawed our way back and took the lead," Descalso said. "There has been a lot of low-scoring games and that's the way it is when it's high stress and you're in a pennant race. You're not going to blow out too many teams."

Kenley Jansen (1-5) took over for Ferguson and got three outs.

"That was crazy," Jansen said.

The D-backs tied it at 1 on Alex Avila's bases-loaded sacrifice fly in the seventh.

Rookie Walker Buehler gave up a leadoff single to Paul Goldschmidt and a one-out walk to Descalso. Ryan Madson came on in his Dodgers debut after being acquired from the Nationals and promptly loaded the bases on a walk to Ketel Marte.

Goldschmidt was called out, but Arizona challenged it. After a 2 1/2-minute review, it was overturned, tying the game as Dodgers fans booed.

Muncy hit his 31st homer leading off the fifth for a 1-0 lead. The ball landed in the D-backs' bullpen in right, ending Arizona starter Clay Buchholz's streak of not allowing a run at 19 innings.

Buehler allowed one run and two hits in 6 1/3 innings. He tied his career high with nine strikeouts and walked three. He had two of the Dodgers' five hits, getting a pair of singles.

Dodgers: Recalled RHP Brock Stewart from Triple-A Oklahoma City and placed him on 60-day DL with a right oblique strain. ... RHP Ross Stripling (low back inflammation) had a bullpen in which he threw 20 pitches, rested and then threw another 25. He's set for a simulated game Wednesday against Dodgers hitters and could be activated late next week.

The Dodgers earned their first-ever four-game series win over Arizona at Dodger Stadium. They improved to 7-9 against the D-backs. The teams play again Sept. 24-26 in Phoenix.

Arizona ended its California trip going 2-5 against the Giants and Dodgers. The D-backs have lost three in a row for the first time since July 15-21, and have lost six of their last nine away from home.

Goldschmidt singled in the first to extend his streak of reaching base to a club-record 45 straight road games, tied with Houston's Alex Bregman for the longest such stretch by a major leaguer this season.

D-backs: RHP Zack Godley (14-7, 4.42 ERA) starts Monday at San Diego in the opener of a two-game set. He is just shy of career highs in innings and strikeouts.