Kentucky ranked No. 1 in AP poll 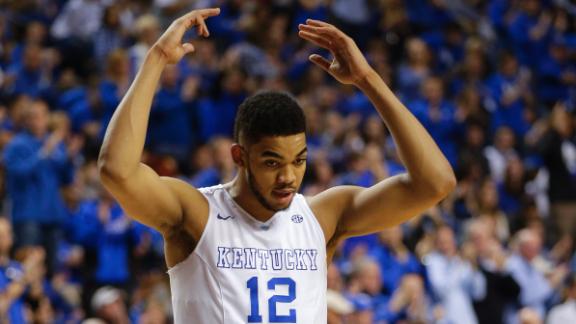 Kentucky's season-long run at No. 1 in The Associated Press Top 25 keeps right on going.

The Wildcats received all 65 votes from a media panel Monday after completing their first 31-0 regular season in school history. Kentucky can become the first team since UNLV in 1990-91, and eighth overall, to be No. 1 the entire season in next week's final poll.

An undefeated season, which would be the first since 1976, is still on the table for the Wildcats, but that's still four weeks and nine games from coming to fruition.

Before the Wildcats can get there, they have a tough week ahead in the SEC tournament, which starts Wednesday in Nashville, Tennessee. Kentucky has a double bye into the quarterfinals and has beaten every team in the conference, but it still figures to face some challenges getting through the bracket.

Duke moved up to No. 2 ahead of Virginia after beating Wake Forest and No. 19 North Carolina. The Cavaliers dropped a spot after losing to No. 14 Louisville.

Villanova, Arizona, Wisconsin and Gonzaga all remained in place, but Wichita State dropped four spots to No. 12 after losing to Illinois State in the Missouri Valley Conference semifinals.

No. 10 Northern Iowa, which beat Illinois State in the title game, was back in the top 10 after dropping out last week. Maryland moved up two spots to No. 8, and Kansas held at No. 9 after losing to No. 15 Oklahoma.

No. 25 Boise State is ranked for the first time. Boise State debuted in the poll after closing out the Mountain West regular-season title with a 71-52 win over Fresno State on Saturday.

The Broncos were picked to finish fourth in conference and started 0-3 in league play, but they won 14 of their final 15 games to earn the No. 1 seed in this week's conference tournament.

Iowa State had the biggest climb in this week's poll, up four spots to No. 13.

Wichita State and Utah, which dropped to No. 17, had the biggest falls, dropping four places each.

Providence, Murray State and Ohio State all dropped out after losses last week.

Andy Katz's 3-Point Shot: Weekly Awards
Andy Katz hands out his final regular-season awards for the player and team of the week, and he recognizes a few good moments for seniors.