Kershaw's Game 7 was far from a storybook ending 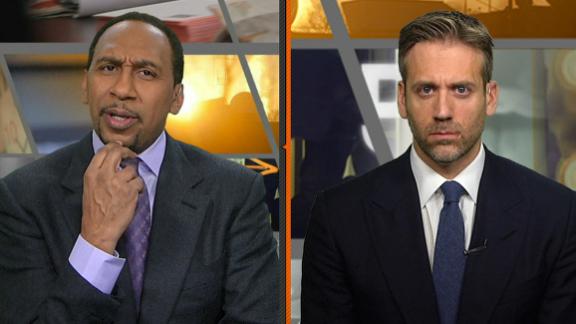 LOS ANGELES -- The Dodgers had a plan to make Clayton Kershaw a World Series champion, and probably a Game 7 hero, too. All of those doubts about his postseason chops -- the one jagged edge on the smooth surface of his career -- would be removed. Can't you just see him holding up that trophy, the official cap backward on his head, his hair surfing his forehead, a crooked smile destined to be described as either "relieved" or "redemptive," the headlines shouting "FINALLY"?

The successful implementation of the plan meant it would be his kids, not the ones wearing Astros orange, running all over the Dodger Stadium infield and doing cartwheels between third and home after Game 7 of the World Series. It would be Justin Verlanderor Dallas Keuchel, and not him, standing in the dugout two hours after the last out, surveying the detritus of a celebration like a child with his face pressed to the glass. If the plan had been executed, maybe one of his teammates would have proposed to his girlfriend on the field after the game.

The plan: Yu Darvish for, say, five innings, someone else for one and Kenley Jansen and Kershaw for the final nine outs. Split those final nine any way manager Dave Roberts wanted, with the assumption that Kershaw stood at least a 50-50 chance of standing on the mound with his arms in the air for the final out.

It's unfair and borderline irresponsible the way we insist on judging our best athletes by the titles they've won, as if the lack of a World Series or Super Bowl ring is a character flaw. Is Carlos Beltran a better player because he is now on the roster of a World Series champion? And is Kershaw, with his three Cy Young Awards, somehow worse, and less whole, because he isn't?

Perhaps most cruelly, Kershaw was unable to chart the course of his own destiny because Darvish got 10 outs total, split evenly, in two World Series starts. The Dodgers traded for Darvish at the deadline for moments precisely like this one. He wasn't needed for the regular season; he was in a Dodgers uniform to stand next to Kershaw and dare anybody to take a seven-game series with the two of them starting four.

Instead of rising to the occasion, Darvish grabbed an engrossing World Series by the lapels and threw it out into the street. Enough of your compelling drama; you will sit here and watch three relievers come to the plate during seven innings of fait being accompli. You will watch a man who has averaged 11 strikeouts every nine innings through his five-year career rendered unable to induce a single swing-and-miss from an American League pitcher with a runner on third and one out. You will watch the Dodgers treat the first five innings like a trivia question: What's the most runners a team can put on base without any of them scoring? You will suffer through the infernal noise emanating from the speakers hovering over center field like the devil's head -- noise for the sole purpose of creating more noise -- even though the outcome had long ceased to be in doubt. And more than anything, you will be subjected to three solid hours of Astros catcher Brian McCann walking to the mound and back as if he were aerating the grass.

"I know he wanted the baseball," Roberts said of Darvish. "I know he was prepared. I just can't explain the results. I really can't."

Eight pitches and two runs into the first inning, Kershaw started Rockette-kicking his way from one end of the bullpen to the other. When the Astros got the first two runners on base in the second, he stood as close to the left-field fence as possible, windmilling his arms and stretching them over his head. He was the human semaphore -- Yo, anybody see me down here?

"Me not being familiar with being in the bullpen, I just wanted to make sure I was ready as best I could," Kershaw said. "When people got on base, I started moving around a little more."

After Darvish gave up three in the second, Roberts went to Brandon Morrow for the last out of the inning. Kershaw jogged in from the pen to start the third, down 5-0, hardly the dramatic, white-horse entry he might have imagined. "I talked to Doc [Roberts] before the game, and he mentioned that if Yu had a short start, there would be a chance to get in there early," Kershaw said, "so I was ready to go."

And so the man with the perplexing postseason inconsistencies -- he was masterful in Game 1, lousy in Game 5 -- threw four easy shutout innings. He was a big-game pitcher with a problem: By the time he got there, the game had stopped feeling big. He was left with the grumbly feeling that he pitched well enough and long enough to ignite an offseason of reflexive hindsight.

"You know -- I don't know," Kershaw said when asked whether he could have started. "I felt fine, but I don't think that was even in anybody's thought. We had a pretty good plan from the outset. ... It's unfortunate that it got kind of out of hand pretty quick out there."

It's too easy -- and, in a cosmic sense, utterly pointless -- to say Kershaw should have started. There's no question he would have done it had he been asked. After Game 6 he said he was good for "27 innings" if it came to that, and it would have been kind of cool if it had. Still, it's not as if throwing four shutout innings in a 5-0 game automatically translates into a complete-game shutout that would have given the Dodgers their first title since 1988. "You don't know what you're going to get in either one of those guys," Roberts said of Kershaw and Game 4Alex Wood. "And to think they're going to start the game, I think it's unfair to Yu."

The losing clubhouse after a World Series, especially a seven-game series, is almost always a grim spectacle. You get doused with Champagne and beer in the winning clubhouse; you get doused with sadness in the losing one. But the Dodgers' clubhouse wasn't so much depressed as vacant. There were a ton of reporters waiting to convey the gloom, but there was almost no one in there to embody it. Cody Bellinger, a rookie who struck out a record 17 times in seven games and had every reason to opt for a distant corner and the fetal position, stood at his locker and answered every single question for more than 15 minutes. Since he was nearly alone, he took the brunt of it -- wave after wave of the same questions. It was like a hostage video, in 87 takes.

Eventually a few of the veterans wafted out from the far reaches of the room. Rich Hill, Brandon Morrow, Jansen, Wood -- finally, Kershaw. Clear-eyed but resigned, he refused any opportunity to look forward to better tomorrows ("I don't care about next year right now," he said) but said he felt reflecting on the joys of the season would be appropriate because it would "keep our minds off not winning."

And, presumably, the chalky aftertaste of Game 7. Kershaw came into it with a postseason reputation in need of repair and came out of it as everyone's favorite answer to what might have been. It looked about the way that sounds: unsatisfying, slightly empty, the ending to the world's worst storybook.