Keselowski: Not focused on 'rhetoric' 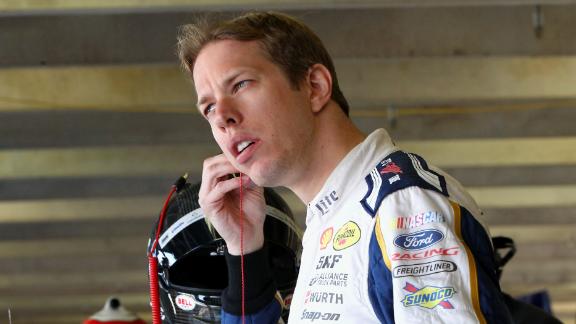 AVONDALE, Ariz. -- Kevin Harvick doesn't regret shoving Brad Keselowski from behind -- a move that escalated a pit road brawl between Keselowski, Jeff Gordon and their teams -- but acknowledged Friday that he could have behaved differently.

"I never look back on something as a regret," Harvick said Friday at Phoenix International Raceway. "I think you look back on them as lessons."

Still, Harvick readily admitted he loves the drama that the fight created -- he just doesn't love having to one day explain his behavior to toddler son Keelan.

"You guys know, I love the controversy," he said. "In the end, the difficult part for me is to go home and realize one day you're going to have to answer those questions to your son."

Keselowski said little about last week, and said he hasn't paid attention to the "rhetoric" in the days that followed the fight.

"I can't spend all my time worrying about the other people," he said. "I have to worry about winning this weekend, this race, and this championship. That's where my focus is and will continue to be.

"A lot of these conversations and a lot of these talking points are meant to serve as a distraction, so to sit here and really comment on a lot of them would really be to justify them. I know the things that I'm doing are the right things."

Harvick was most certainly trying to create a distraction -- he and Keselowski are at the back of the eight-driver Chase field and both trying to claw their way into the finale. Harvick has always played the Machiavellian role in the NASCAR garage, and did again following last Sunday's race at Texas Motor Speedway.

Gordon was attempting to confront Keselowski on pit road when Harvick rushed in from behind and shoved Keselowski into the scrum. It ignited a brawl that left both Keselowski and Gordon bloodied, and four Hendrick Motorsports crewmen were suspended by NASCAR. In all, six Hendrick crew members were fined a total of $185,000 -- a penalty Hendrick Motorsports will pay on their behalf.

Harvick said he pushed Keselowski because he believed the driver should not ignore Gordon after an aggressive on-track move ruined Gordon's race.

"It escalated because Brad didn't want to face the situation," Gordon said Friday. "His crew guys were in the middle of that. The thing I feel terrible about is getting my guys involved. In a face-to-face (between me and Brad) there would have been no incident. Kevin played a role, no doubt.

"I got wrecked a couple times by Dale Earnhardt. The first thing he did was try to put his arm around you and say, 'I didn't mean to do that.' You didn't necessarily believe him, but it had an effect. Some guys you can race like that, and some you can't. You're not out there to make friends, but you're definitely not out there to make enemies."

Gordon had been racing for the win until a late caution sent the race into overtime. He was the leader on a restart but Keselowski tried to wedge his car into a gap between Gordon and Jimmie Johnson. It caused Keselowski to make contact with Gordon, who then got a flat tire and spun.

The result was a 29th-place finish for Gordon, who dropped from first to fourth in the standings as NASCAR prepares for Sunday's final race of the third round of the Chase for the Sprint Cup championship. Four drivers will qualify Sunday to race for the championship in next week's season finale at Homestead-Miami Speedway.

Harvick, Gordon and Keselowski are among the eight drivers vying Sunday for the four spots in the finale.

With so much on the line, Harvick understood the move Keselowski made on the track. But he said he was bothered by Keselowski's refusal to have any sort of meaningful discussion after -- an act he claims Keselowski has done throughout his career.

"I think he races hard and that's what we're all supposed to do and in those positions you'd probably do the same thing yourself," he said. "The problem with it I have is I've been in that situation with him before and had him turn his back on me and just walk off. ... He just kind of rubs me the wrong way when you turn your back on situations and walk off and mumble your way off into no man's land and not just handle the situation.

"I think in those situations, even if you're going to get yelled at, you need to handle it like it needs to be handled."

Gordon, with several days to revisit the incident, also doesn't blame Keselowski for racing so hard with so much on the line. He also wondered if the flared side skirt on Keselowski's car -- teams are pulling on the sheet metal during pit stops in an action NASCAR has so far said is not illegal -- hit his tire and caused the flat.

"I have no issue with a guy being aggressive and making a bold move," said Gordon, who didn't think he'd have tried to shoot the gap the way Keselowski did. "Was there a big enough gap? Yeah, for a split second. I never realistically thought someone would take that as a realistic gap. I wouldn't have done it. I would have known what the results would be, which is what they were."

Keselowski, as he always does, said he won't change to serve other drivers in the garage.

"I feel pretty good about the actions I've taken. Certainly I'm not perfect. I've made some bad ones, but I didn't make any bad ones last week and I still feel that way."