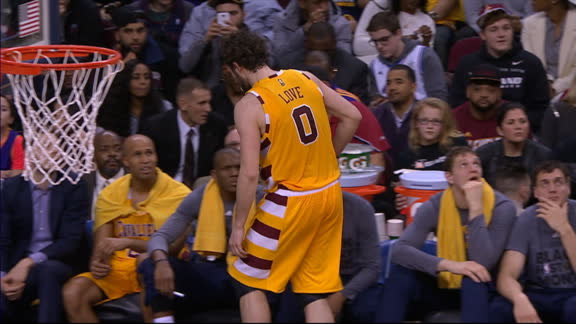 CLEVELAND -- Cavaliers forward Kevin Love exited Cleveland's game against the Los Angeles Lakers late in the first half on Wednesday with a left shoulder contusion and did not return.

It is the same shoulder Love dislocated in the first round of the playoffs against the Boston Celtics, causing him to miss the remainder of Cleveland's postseason run to the Finals.

"At the time I didn't know really what it was," Love said after the Cavs' 120-111 win over the Lakers. "Just like when you get hit in the funny bone, the elbow has shooting pain. It felt like fire was running down my arm. Just a stinger, and doctors decided we'll be cautious and use the break for it to feel better, but it actually feels OK right now."

Cavs general manager David Griffin told ESPN's Lisa Salters that Love is not expected to miss much time. Griffin said the injury looked a lot worse than it is.Love told reporters he did not expect to miss any games.

Wednesday marked the Cavs' last game before the All-Star break. Love, who was not selected to join LeBron James in Toronto, will have six days off to heal before Cleveland's next practice after the break.

Love was injured while jostling with Kobe Bryant in the post.

"I think I took two dribbles, and the second one just kind of jammed it up on Kobe," Love said. "Kind of went to the bench and went straight to the locker room."

While the energy was sucked out of Quicken Loans Arena for a few tenuous minutes with Love's status unknown,LeBron Jamessaid he did not overthink what another serious injury to Love could mean for the Cavs'chances this season.

"I felt like we got a great medical staff, and they was going to do whatever it took to help," James said. "I was just wishing that it wasn't popped back out. I seen the play. It didn't look like there was any reason for it to be popped out, so I thought it would just be a stinger or whatever the case may be. It wasn't time, at that point in time, for me to hold my breath. I was still in the game, and we had to close out the quarter."

Love's shoulder injury last postseason came while battling in the post against Kelly Olynyk of the Boston Celtics. Coincidentally, Olynyk left Boston's win over the Los Angeles Clippers on Wednesday with a shoulder injury.

Love said team doctors advised him he could have postsurgery complications with his shoulder, even though it's healed enough for him to play for the last several months.

"I was told it could be a number of things, one being my stuff is anchored down pretty tight in there, and it will always kind of be like that," Love said. "Getting full range of motion back, you can get to 90-95 percent, but getting that last little bit is always tough. It wouldn't be surprising if in the next couple days it loosens up on me and feels good."

Kevin Love leaves game with apparent shoulder injury
Lisa Salters reports on Kevin Love's condition after he appears to injure his shoulder in the second quarter against the Lakers.