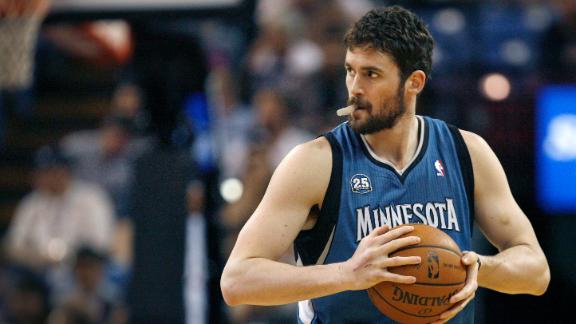 CLEVELAND -- Kevin Love is finally teaming up with LeBron James.

The Minnesota Timberwolves, Cleveland Cavaliers and Philadelphia 76ers completed a delayed blockbuster trade Saturday that's been talked about for months and on hold for 30 days. Love, arguably the game's best power forward, is headed from Minnesota to Cleveland, where he will join James and instantly make the Cavs an NBA title favorite.

The Timberwolves are getting No. 1 overall pick Andrew Wiggins and former top pick Anthony Bennett from Cleveland, veteran forward Thaddeus Young from Philadelphia and a $6.3 million trade exception.

The 76ers get a 2015 first-round draft choice, guard Alexey Shved and forward Luc Richard Mbah a Moute from Minnesota.

A rarely used NBA rule forced the teams to wait to complete the trade until 30 days after Wiggins signed his rookie contract.

It's official now, and Cleveland, which hasn't had a major pro sports championship since 1964, is poised to make a run at ending the drought.

"Kevin joining the Cavaliers represents a very special and unique opportunity for our team," Cavs general manager David Griffin said in a release. "At only 25, Kevin has already firmly established himself as one of the NBA's elite players and his talent, versatility and fit are major parts of our team's vision for success."

The Cavs and Timberwolves have been discussing a trade involving Love for months, long before James decided to leave Miami and come back home to Ohio. The deal dragged on through the summer, first because of Cleveland's unwillingness to include Wiggins in any package, and then due to the 30-day provision.

That bit of fine print in the collective bargaining agreement triggered an agonizing wait in both cities, more so in championship-starved Cleveland where generations of fans have longed for the Cavs, Indians or Browns to win it all.

Now the league's best player has another superstar as a running mate. Add in All-Star point guard Kyrie Irving and James again finds himself the ringleader of a star-studded trio after leaving Chris Bosh and Dwyane Wade behind with the Heat.

Welcome to the Land @kevinlove!

"I'm going to be very excited to have him," James said at his recent homecoming event in Akron, Ohio. "I don't really care about the 26 (points) and 12 (rebounds). I care about the basketball IQ. His basketball IQ is very, very high. He's a great piece."

Love's arrival caps a spectacular summer for the Cavs, who won just 33 games last season and haven't been to the playoffs since James left in 2010.

The Cavaliers welcomed Love on Twitter, asking fans to "show the love."

- Cleveland Cavaliers (@cavs) August 23, 2014Cleveland locked up Irving, last year's All-Star Game MVP, to a maximum contract extension on the first day of free agency and then James rocked the league by announcing he was returning. Beyond that, Cleveland signed free agents Shawn Marion, Mike Miller and James Jones, veteran players with NBA titles on their resumes.

The Cavs have soared from an Eastern Conference also-ran to title favorites in less than two months.

Love is coming off of his best season, averaging career highs in points (26.1) and assists (4.4) while grabbing 12.5 rebounds per game and shooting 37.6 percent from 3-point range. But the Wolves finished 40-42, well out of the playoff chase in the demanding Western Conference, and a disenchanted Love had seen enough.

He watched the Timberwolves make mistakes with coaching hires, front office hires and in the draft, all of which conspired to keep the franchise out of the playoffs for the last 10 years. He was infuriated when former team president David Kahn declined to give him a full, five-year max contract two years ago and also grew distant from teammates last season as the team faded down the stretch.

"I want to personally thank Kevin Love for his six seasons with the Wolves," said Timberwolves owner Glen Taylor. "On the floor, Kevin has worked hard to make himself a great player in the NBA. He also made it a priority to give back to the community ... we wish him nothing but the best in Cleveland."

Griffin was initially reluctant to include Wiggins, the super-athletic small forward who spent one year at Kansas.

The Timberwolves entertained offers from several other teams for Love, who can opt out of his contract next summer and made it clear to the team that he planned to go elsewhere after missing the playoffs all six years in Minnesota.

But they stayed patient, and Cavaliers owner Dan Gilbert and Taylor spoke in Las Vegas at summer league and agreed Wiggins had to be included.

And although they parted with Love, the Timberwolves can rebuild quickly.

Young is an energetic, 26-year-old veteran who will immediately step in and start in Love's spot. He's nowhere near as versatile as Love, but he averaged a career-high 17.9 points and 6.0 rebounds for the woeful Sixers last year.

Bennett struggled mightily in Cleveland last year after being the No. 1 pick out of UNLV. Shoulder surgery caused him to show up to camp out of shape and he spent his entire rookie season looking overmatched. He had surgery to address sleep apnea and showed up to summer league in great shape.

"With the additions of Wiggins, Bennett and Zach LaVine this summer, we have brought in three exciting young athletes who all have the potential to have an impact in this league," Saunders said. "All three of them complement each other very well and we believe they will be foundations of our team for years to come."

The Cavaliers have sent a letter to fans who purchased a Wiggins jersey from their online store offering a refund or an exchange credit for a future purchase.

ESPN.com's Darren Rovell and The Associated Press contributed to this report.

Adande On Love Deal
J.A. Adande breaks down what the addition of Kevin Love does for the Cavaliers and the chances that Cleveland makes it to the NBA Finals.