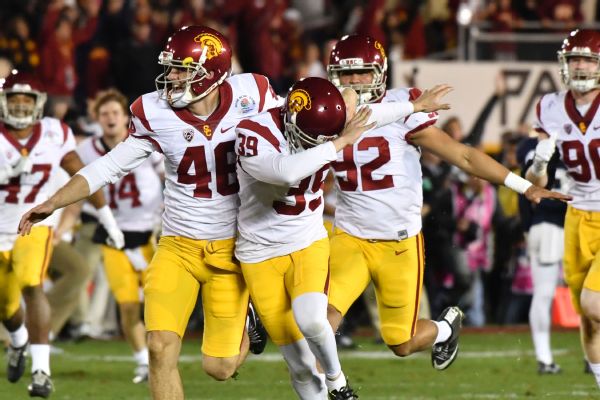 ESPN
By Kyle Bonagura
The girlfriend of former USCkicker Matt Boermeester has issued a strong statement in his defense after a Title IX investigation led to his dismissal from the university and its football team.

Boermeester, who kicked the game-winning field goal in USC's win against Penn State in the Rose Bowl in January, was suspended from the program in February due to what was referred to at the time as an unspecified "student code of conduct issue." Boermeester is accused of pushing Zoe Katz, a member of the USC tennis team, up against a wall late one night in January outside her residence near the university, according to Katz's lawyer, Kerry Steigerwalt.

Katz, who is still dating Boermeester, vehemently denies there was any wrongdoing on his part, and Boermeester does not face any criminal charges, nor does it appear outside law enforcement was ever contacted.

"I want to be very clear that I have never been abused, assaulted or otherwise mistreated by Matt," said Katz, a member of USC's tennis team. "He is an incredible person, and I am and have been 100 percent behind him. Nothing happened that warranted an investigation, much less the unfair, biased and drawn-out process that we have been forced to endure quietly."

The alleged incident was reported to USC's Title IX office by men's tennis coach Peter Smith, whose son was Katz's neighbor, Steigerwalt said. After the Title IX office was informed of the possible abuse, it brought Katz in for an interview. She denied what was being alleged, but said it fell on deaf ears.

"When I told the truth about Matt, in repeated interrogations, I was stereotyped and was told I must be a 'battered' woman, and that made me feel demeaned and absurdly profiled," Katz said in her statement. "I understand that domestic violence is a terrible problem, but in no way does that apply to Matt and me."

After the investigation began, Katz, to her objections, was told she was not allowed to have contact with Boermeester, who is two classes shy of graduation.

A spokesman for the university released the following statement: "The university has concluded its investigation. Student disciplinary records and proceedings regarding any matter of student conduct are confidential and protected by law. Per the registrar, he is no longer enrolled at the university."

When asked how the university came to its decision to expel Boermeester from school despite the victim's strong objections, a university spokesman wrote in an email: "USC stands by its investigation and the accounts provided by multiple witnesses."

"I feel I was misled, harassed, threatened and discriminated against by the Title IX office to such an extent that I had to retain my own attorney during the process to protect myself and to try to get them to listen to me," she said. "The Title IX office's response was dismissive and demeaning, 'We are sorry you feel that way.'"

Boermeester transferred to USC from Saddleback Junior College in the fall of 2014 and had one year of eligibility remaining with the football program. He converted on 18 of 25 field goal attempts last season.
Report a correction or typo
Related topics:
sportsespnzoe katzcollege footballtitle ixusc trojansmatt boermeester
Copyright © 2020 ESPN Internet Ventures. All rights reserved.
More Videos
From CNN Newsource affiliates
TOP STORIES