Kings defenseman Robyn Regehr says he is retiring after 15 seasons 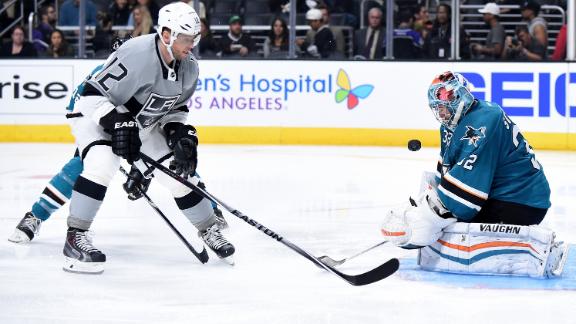 
When Regehr, who will turn 35 on April 19 and was set to be an unrestricted free agent, was asked if he would be back next season, he said, "I'm probably not going to play again."

Kings players and coaches knew this would be Regehr's final game before they took the ice. After the game, Kings forward Jarret Stoll picked up the puck and handed it to Regehr.


"There is a lot that goes into a decision like that," Regehr said. "I have been thinking about it for a little while. You have to think about where your body is at, how it is holding up and not holding up. There are family decisions and all kinds of stuff that are involved with a decision like that. It is a big decision, and I think we have decided."


Regehr played 15 seasons in the NHL for the Calgary Flames, Buffalo Sabres and Kings, totaling 1,089 games and 199 points. He had three goals and 10 assists in 67 games this season.


"He's been a Los Angeles King for not even three years, but him and I go back a long ways," Sutter said. "We lost a Game 7 Stanley Cup with Calgary. To get him here and win one here was awesome. He's not only a good player, he's a great person. That's the best thing about when we got him."


Regehr's planned departure will leave another void on defense for the Kings, who have lost Rob Scuderi and Willie Mitchell to free agency over the past two summers. Los Angeles played the final 76 games of this season without Slava Voynov, who has been suspended since his arrest on domestic violence charges.


Drew Doughty and Jake Muzzin logged extensive minutes on defense this season for the Kings, who missed the postseason for the first time since 2009. Veterans Alec Martinez and Matt Greene are signed to long-term contracts, while youngsters Brayden McNabb and Jamie McBain played significant roles along with late-season trade acquisition Andrej Sekera.


"There were a lot of young defensemen here, and if you look at their seasons, they're going to learn a lot from Robyn Regehr. All those young players, Robyn being their quarterback in the locker room, they're going to miss Robyn, and they have to take a step forward now."