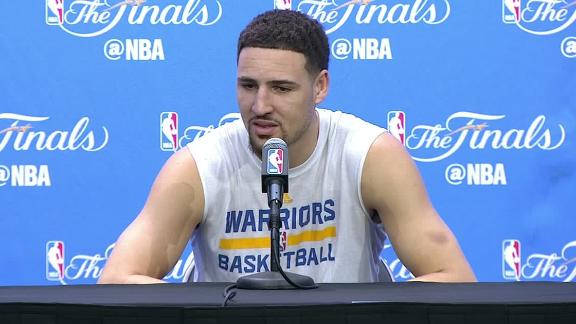 OAKLAND, Calif. -- The tension between the Golden State Warriors and Cleveland Cavaliers increased significantly Sunday asKlay Thompson and LeBron James broke into a war of words about a previous war of words.

The Warriors, stung fromDraymond Green's suspension as a result of his flagrant fouls, targeted James and his sensitivity to trash talk after James complained that Green crossed the line during the Warriors' Game 4 win Friday.

"Guys talk trash in this league all the time. I'm just kind of shocked some guys take it so personal," Thompson said. "I don't know how [James] feels. But obviously people have feelings, and people's feelings get hurt even if they're called a bad word. I guess his feelings just got hurt. I mean, we've all been called plenty of bad words on the basketball court before. Some guys just react to it differently."

"My goodness. I'm not going to comment on what Klay said, because I know where it can go from this sit-in," James said. "It's so hard to take the high road. I've been doing it for 13 years. It's so hard to continue to do it, and I'm going to do it again."

That comment from James then drew reaction from the Warriors side, from an unlikely but powerful voice. Ayesha Curry, the well-known wife of Stephen Curry, tweeted a response at James.

That revealed another reason the Warriors are upset with James. Green's flagrant foul Friday came after James stepped over Green, a gesture seen as disrespectful in basketball. The NBA dinged James with a technical foul for the act, calling it a "physical taunt."

Green was not available to reporters, but some of his teammates spoke for him.

"It just shows as a basketball player, as an athlete, a guy does something like that, you kind of lose respect for him," Warriors forward Marreese Speights said. "I had a lot of respect for LeBron over his career, since he was in high school. But do things like that to get a guy suspended? That's kind of disrespectful, a little bit."

Said Stephen Curry: "I don't know what LeBron's intention was. You have to ask him. Obviously, Draymond thought it was disrespectful and wanted to get up and say something, so that was his reaction to it. I would have probably done the same thing."

James, in fact, was asked what his intentions were when he stepped over Green. He said play was going on and he was attempting to get back into the play and wasn't trying to bait Green.

James, naturally, had teammates backing him up.

"There's definitely some things you can't say to another man," J.R. Smith said. "But some people don't live by that code."

All of that adds spice to a rivalry that has remained mostly tame despite the back-to-back Finals matchups, but the fact remains that the Warriors are ahead 3-1 in the best-of-seven series.

"At the end of the day, we've got to go out and show up and play better tomorrow night," James said. "And if we don't, then they're going to be back-to-back champion, and that's it."

Klay: I'm shocked some guys take trash talk so personally
Klay Thompson says trash talk is a part of the game and that he is surprised that some players take it so personally, adding that he tries to ignore it.