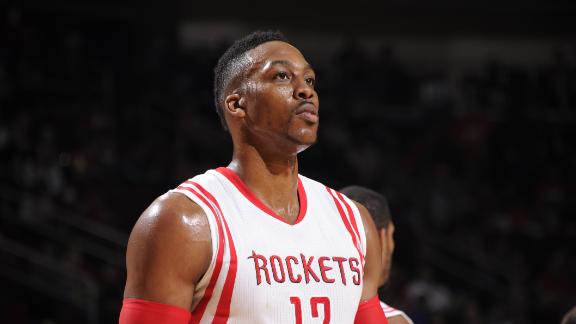 The Houston Rockets are bracing for the loss of Dwight Howard for at least a month due to persistent trouble with his right knee, according to league sources.

Sources told ESPN.com that the Rockets, while confident that Howard has enough time to bounce back for the regular-season stretch run and playoffs, fear their defensive anchor will be lost for a period of "weeks" as opposed to days.

Howard is still in the process of getting additional consultation from various doctors to determine the best treatment course for the knee.

Yet sources told ESPN.com that the Rockets already acknowledge that a period of rest "likely measured in weeks" will be the minimum requirement before their defensive anchor is ready to the return to the lineup. But sources say Houston nonetheless remains confident that Howard will be able to come back "in plenty of time" to ramp up for the postseason, even if the absence stretches into the six-weeks range.

The Rockets entered Josh Smith's return game Saturday night at Detroit ranked No. 2 overall in the league in defensive efficiency, sparked in large part by Howard's rim protection and rebounding.

Houston appeared to dodge further injury trouble Saturday night when star guard James Harden suffered a scary bone bruise against the Pistons before shaking it off and returning in the Rockets' 114-101 defeat.

A fluid buildup in the right knee prompted the Rockets to rule Howard out of this weekend's trip to Detroit and Boston, with coach Kevin McHaleacknowledging Friday to reporters that he doesn't expect Howard "to be here for a while."

Pain in the same knee forced Howard to miss 11 games earlier this season. The Rockets have largely maintained a top-four spot in the West Conference all season despite the time missed by their star big man. The 29-year-old is averaging 16.3 points, 11 rebounds and 1.4 blocks.