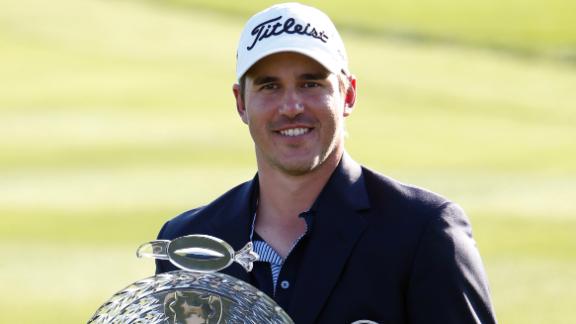 SCOTTSDALE, Ariz. -- Brooks Koepka has lost track of the miles flown, the oceans crossed and the stamps in his passport as he toiled in remote corners of the golfing world for more than two years to prepare himself for moments like Sunday at the Phoenix Open.

The most significant journey turned out to be the 50 feet his golf ball traveled from the fringe, up a ridge and right into the cup.

That eagle on the par-5 15th hole gave Koepka a share of the lead, and he left the mistakes to everyone else the rest of the way. He closed with a 5-under 66 for a one-shot victory and his first PGA Tour title.

"I left every long putt short today," Koepka said. "I said to my caddie, I'm finally going to get this one there."

Hideki Matsuyama, among five players who had a share of the lead over the wild final hour at the TPC Scottsdale, was the last player in Koepka's way. The 22-year-old from Japan had an 18-foot putt to force a playoff, but it never had a chance and he closed with a 67.

Masters champion Bubba Watson (65) and Ryan Palmer (66) had to settle for pars on the three closing holes and joined Matsuyama in a tie for second. Martin Laird, tied for the lead with two holes to play, hit into the gallery on the 17th and made bogey and yanked his tee shot into the water on the 18th and made double bogey for a 72.

A week that began with hype over Tiger Woods, who shot 82 and missed the cut by 12 shots, ended with yet another example of a massive generation shift.

The 24-year-old Koepka didn't get the recognition of Jordan Spieth and Justin Thomas, or former U.S. Amateur champion Peter Uihlein, his roommate in Florida with whom he often traveled in Europe. His raw power got the attention of his peers, however, and Koepka went through enough trials to mature into a rising star.

His second victory in four starts against strong fields -- he won the Turkish Airlines Open during the final stretch of the Race to Dubai in Europe in November -- moved him to No. 19 in the world.

"It's unbelievable," said Koepka, who finished at 15-under 269. "I didn't think I would work my way up this quickly, but playing the Challenge and European tours led to this. And especially the failure I've had. I can't tell you how much I learned from that."

Koepka proved to be one smooth customer -- he describes himself as "chill" -- even when the starter pronounced his name as something like "cupcake" on the first tee. He laughed during practice swings. He wasn't rattled when Matsuyama holed a wedge from 129 yards for eagle on the opening hole, or when the Japanese star added two more birdies to catch Laird, who began Sunday with a three-shot lead.

Koepka was making nothing but pars. Back-to-back birdies late on the front nine kept him in the game, though still two shots behind.

Matsuyama took the lead with a beautiful pitch behind the green at the par-5 13th, and Koepka followed him to 4 feet for a birdie to stay two behind. Matsuyama had gone 44 holes without a bogey until a three-putt on the 14th, and then everything changed on the 15th.

Koepka rolled in his 50-foot eagle putt and tied Laird, who two-putted from 25 feet.

The tournament effectively was decided on the 322-yard 17th. Laird went well right into the gallery, did well to chip to 50 feet in the fat of the green and three-putted for a bogey. Koepka needed a little luck. With the tees moved forward, it was slightly too close for his 3-wood, not long enough for his hybrid.

He hit 3-wood onto and over the green. And when he saw it disappear over the back, Koepka thought he was cooked.

"One of the camera guys said it stayed up. I still don't know how," he said.

The ball settled on the red hazard line, a foot from the water. He made par, and then showed no nerves on the 18th by smashing a driver over the water and bunkers, 331 yards away.

Watson tied for the lead by holing a bunker shot on the par-3 12th for birdie and two-putting for birdie from 20 feet on the 13th.

"I just couldn't do anything after that," he said.

His lost opportunity came on the 17th, when his 3-wood went to the front of the green and he three-putted from over 100 feet and made par. Palmer also had birdie chances on the last three holes and couldn't convert.

Arizona State junior Jon Rahm closed with a 68 to tie for fifth with Laird. It was the best finish by a Sun Devil still on the golf team playing in the Phoenix Open. The previous best was a tie for 32nd by Phil Mickelson. However, the top 10 does not get the Spaniard into Torrey Pines next week because he is an amateur. Besides, he's on his way to Hawaii to join his teammates for a tournament.

Koepka is going to San Diego -- one of the shorter trips in his career -- and with new status as a PGA Tour winner.