LA among cities in US bid for 2026 World Cup 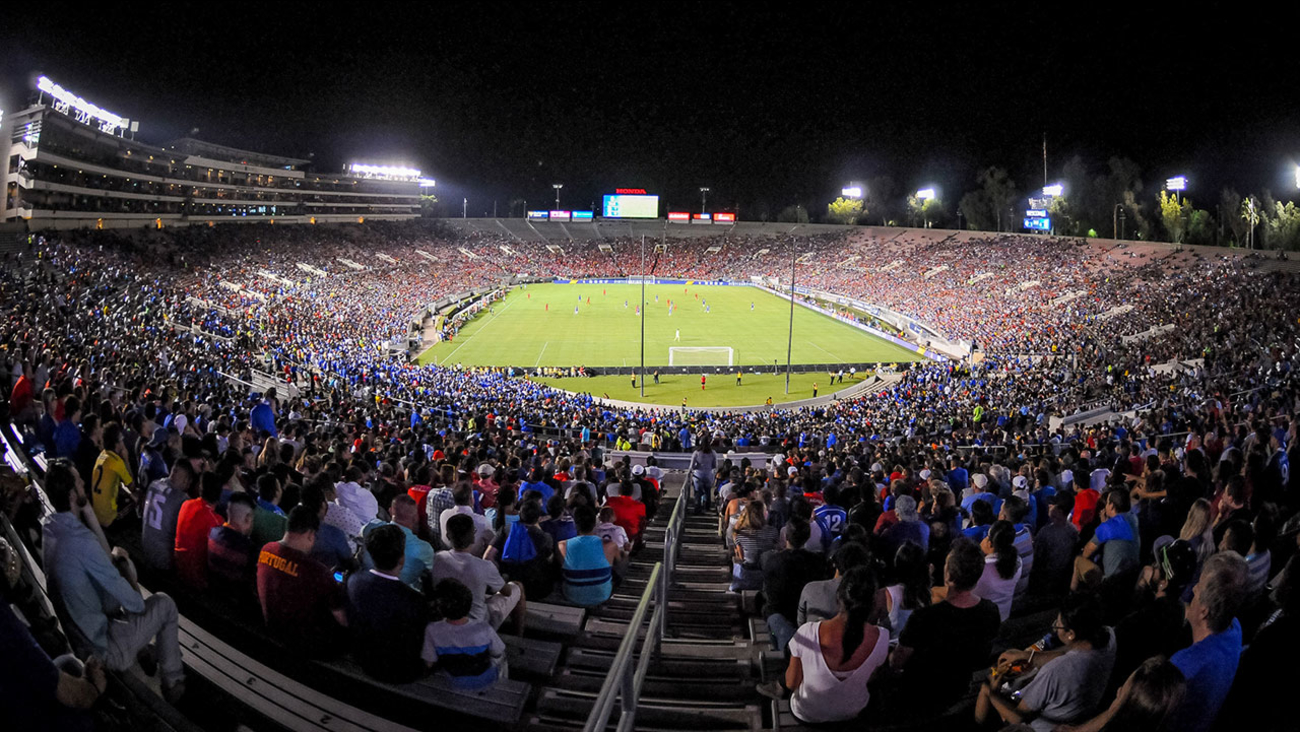 LOS ANGELES -- The Los Angeles area is one of 17 cities in the United States that will be listed in documents to be submitted Friday to FIFA in a joint North American bid to host the 2026 World Cup.

The United States, Canada and Mexico are submitting a joint North American bid for the soccer tournament that includes 23 potential host cities in total.

The Los Angeles-area bid considers potential sites for games to be Inglewood - where a new NFL stadium is under construction - or Pasadena - where the Rose Bowl hosted World Cup games in 1994.

Chicago and Minneapolis have dropped out of the North American bid because of what city officials said were burdensome financial demands by FIFA.

Morocco also is bidding, and the 207 other FIFA members are scheduled to make the decision at FIFA Congress in Moscow on June 13.

Sixty games would be played in the U.S. under the bid plan, including all from the quarterfinals on. Three cities were included from Mexico and Canada, and both of those nations would host 10 games.

The 2026 World Cup will be the first with a 48-nation field, and if chosen the North American bid intends to ask FIFA to choose 16 venues for the tournament.

The Canadian cities are Edmonton, Alberta; Montreal; and Toronto; and Mexico's are Guadalajara; Mexico City; and Monterrey.

Only two of the cities hosted games during the 1994 World Cup: the Rose Bowl in Pasadena and the Citrus Bowl in Orlando.

Though U.S. President Donald Trump disparaged Africa and Haiti in remarks in January, the North American organizers say they are confident they will get sufficient votes. New U.S. Soccer Federation President Carlos Cordeiro intends to address bid campaign plans with media next week.

Evidence introduced in U.S. District Court last year during the trial of former soccer executives documented bribes paid ahead of the 2010 vote by the FIFA executive committee that awarded the 2022 World Cup hosting rights to Qatar over the U.S. The vote for 2026 will be by the entire FIFA Congress rather than the roughly two dozen members of the executive committee, which chose the hosts from 1986-2022.

"The FIFA president has made very clear this will be the most transparent bid process ever, including a public vote amongst the Congress in Moscow," John Kristick, the North American bid director, said Thursday.

Unlike Morocco's bid, the North American proposal does not require any stadium construction.

"What you're seeing across international events is eliminating the need to invest in all new facilities and infrastructures," Kristick said. "The concept of having existing sustainable facilities is a major benefit, and that's where our bid is clearly in an exceptional place."

"FIFA could not provide a basic level of certainty on some major unknowns that put our city and taxpayers at risk," Matthew McGrath, a spokesman for Chicago Mayor Rahm Emanuel, said in a statement. "The uncertainty for taxpayers, coupled with FIFA's inflexibility and unwillingness to negotiate, were clear indications that further pursuit of the bid wasn't in Chicago's best interests."

"We were requesting flexibility on the financial liability caps and/or stronger estimates on anticipated costs associated with the events, including the possibility of hosting six games and a Fan Fest that could last for up to one month," its bid committee said in a statement.

FIFA's bid documents said "the government must grant a general tax exemption for FIFA" along with the local organizing committee and any subsidiaries and "unrestricted import and export of all foreign currencies." The documents also state "the government is requested to generally establish a visa-free environment or facilitate existing visa procedures for them."

FIFA also requires contracts with governments be under the jurisdiction of Swiss law. Hans Hultman, a spokesman for the international soccer governing body, said FIFA would respond as soon as possible to questions about the reasoning behind its requirements.

"It's not unusual for an international event such as the World Cup or the Olympics to govern under Swiss law," Kristick said.

Holding a tournament in the U.S. would subject many of the documents generated to subpoena by the U.S. federal prosecutors, who have secured numerous guilty pleas to corruption charges from soccer officials since 2015 and obtained convictions at trial last year against Juan Angel Napout, the former president of South American soccer's governing body, and Jose Maria Marin, the former president of Brazil's soccer federation.
Report a correction or typo
Related topics:
sportslos angeles countypasadenainglewoodfifa world cupworld cupfifasocceru.s. soccer
Copyright © 2021 by The Associated Press. All Rights Reserved.
More Videos
From CNN Newsource affiliates
TOP STORIES