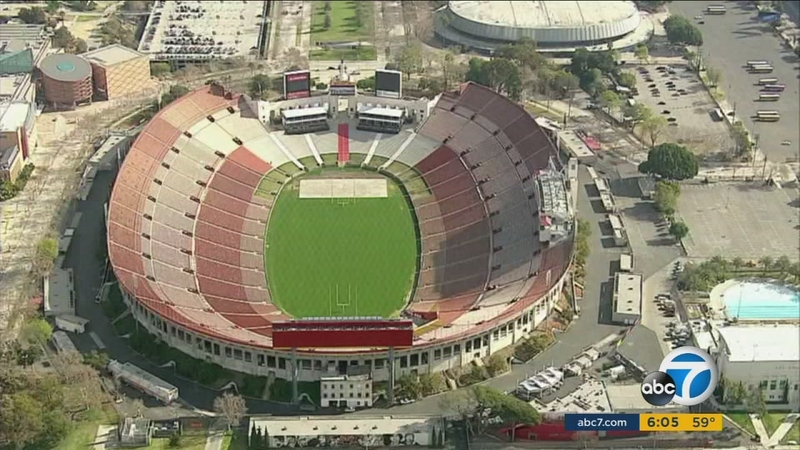 EXPOSITION PARK, LOS ANGELES (KABC) -- In 1946, Cleveland Rams owner Dan Reeves uprooted the franchise and moved it to Los Angeles and its new home at the Los Angeles Memorial Coliseum.

The move was met by much resistance from the NFL, but Reeves ultimately triumphed in his relocation and the Rams would call the Coliseum home from 1946 to 1979.

A precondition to the lease agreement with the Coliseum required the Rams to have at least one African American player. At the time, the NFL did not allow black football players in the league.

Reeves would break the racial segregation barrier in the NFL when he signed Kenny Washington, thus fulfilling the precondition obligation and opening the door to African Americans.

In 1947, Jackie Robinson would break the color barrier in MLB while playing for the Brooklyn Dodgers.

Much has changed in the U.S. over 70 years, but the Rams will now suit up in the Coliseum again in 2016 after the NFL announced the team was moving back to L.A. on Tuesday.

While it's just a temporary move as Rams owner Stan Kroenke's $1.8 billion stadium in Inglewood is built, the chance to watch the team take the field again at the Coliseum has fans excited.

"I'm so glad the Rams are coming back," fan Raymond Trujillo said as he visited the Coliseum on Wednesday. "It's been a long time and I'm trying to see where I'm going to be sitting here now."

As excited fans wait in anticipation, the team managing the Coliseum has been hard at work since August preparing the historic venue to be ready for pro football again.

Coliseum General Manager Joe Furin said crews will alter a few things to accommodate the NFL and fans at the 93-year-old facility.

"If we can reduce wait time, line time, getting in the gate, buying a hot dog, getting them to their seat so they can enjoy the action, then that's what we're going to do," Furin said.

NFL officials hope to have the Inglewood stadium up and ready to host a game by the 2019 season, meaning the Rams will be sharing the Coliseum with the University of Southern California for at least a few years.

USC Athletic Director Pat Haden, who played quarterback for the Trojans and Rams when they both played in the Coliseum in the 1970s, said the Rams will pay for upgrading the lights to NFL standards.

But Haden said the field itself is another issue they'll have to tackle.

"The condition of the turf, it's really great with one team, with two it's something we'll be talking about what we might want to do in that case," Haden explained.

Whether the San Diego Chargers could join the Rams and Trojans at the Coliseum has yet to be decided.