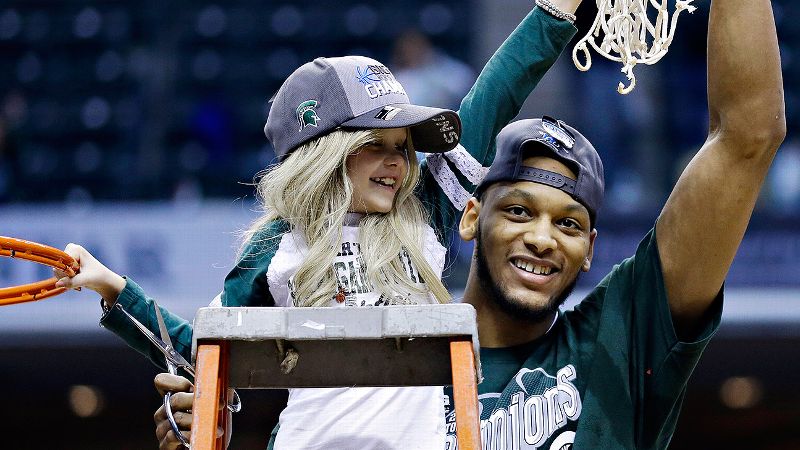 Her father, Matt Holsworth, told The Associated Press that Lacey died at their St. Johns, Mich., home "with her mommy and daddy holding her in their arms."

Princess Lacey has achieved the ultimate victory. She now dances among angels.... The world is a... http://t.co/SAXeJ4D4zH

- Princess Lacey (@adorablelacey) April 9, 2014Lacey Holsworth had neuroblastoma, a fetal-nerve cell cancer, and wore a blond wig because chemotherapy caused her to lose her hair. She met Payne two years ago while she was in the hospital for a cancer treatment and struck an immediate bond with him.

Back pain while dancing in 2011 led to the discovery of a football-sized tumor that had engulfed her kidney. After another tumor wrapped around her spine, her father had to carry her into a hospital on Dec. 28, 2011. She lost feeling below her belly button and couldn't walk on her own for several months, a long stretch that included the first of many visits from Payne.

Lacey had been a huge supporter of Payne, and he reciprocated by becoming a close friend, visiting her at the hospital and inviting her to games.

"Words can't express how much I already miss Lacey," Payne said in a statement. "She is my sister, and will always be a part of my life. She taught me how to fight through everything with a smile on my face even when things were going wrong. I'm a better man because of her.

"She said she first liked me because of my smile, but it's her smile that made America fall in love with her. I know she's smiling and dancing in heaven right now. My princess is now an angel."

"Even though he knew this was inevitable, it's hard," Izzo told the Free Press. "But he took it with the class and dignity that she taught him. I told him, 'Not everybody gets to touch somebody's life like you have. And sometimes other people impact your life, too.'"

The 6-foot-10 Payne carried her around the court on senior night at Michigan State. Lacey got to help the Spartans cut down the net after they won the Big Ten tournament, and she received a championship hat with the rest of the team.

She also was with the Spartans for the East Regional of the NCAA tournament and accompanied Payne to the College Slam Dunk Championship in Dallas during Final Four weekend.

"Our thoughts and prayers are with the entire Holsworth family today," Izzo said Wednesday in a statement on behalf of the entire program. "Princess Lacey has taught us all an incredible lesson about love, strength and toughness. We can all learn from her on how to handle adversity with class and dignity.

"She has become an inspiration to our team, our families, our university, and most recently our entire nation. At just eight years old, she has given us all a lifetime of memories. We are all saddened today, but we are all better people for having known Lacey. Her smile and passion for life will live in the hearts of everyone she has touched across our country."

Lacey stood with Izzo last month at the team's basketball banquet as the coach put his arm around her as he addressed the hundreds of players, families and others in attendance.

His message: What Lacey was going through put his team's injury woes in perspective.

"I've learned they're minor injuries when you look at life," said an emotional Izzo, who paused to gather himself. "One of the greatest things I've done in my 30 years here" was seeing Payne interact with Lacey during a hospital visit.

Former Detroit coach and longtime ESPN announcer Dick Vitale pledged to raise $250,000 toward cancer research over the next month and present a check in that amount in Lacey's memory during his annual gala to benefit The V Foundation for cancer research on May 16 in Sarasota, Fla.

"I talked to Matt (Holsworth) this morning. I promise you that we are not going to let her die in vain," said Vitale, who was thrilled to have Lacey attend his gala last year.

"I was just crushed," Vitale said of how he felt about Lacey's death when he found out Wednesday morning,. "They should take Lacey's picture and when they define courage it should have her photo right next to it."

Wow i dont even wanna believe it @adorablelacey 's family is in my prayers. I know she will be watching over us all #RIPLACEY ������