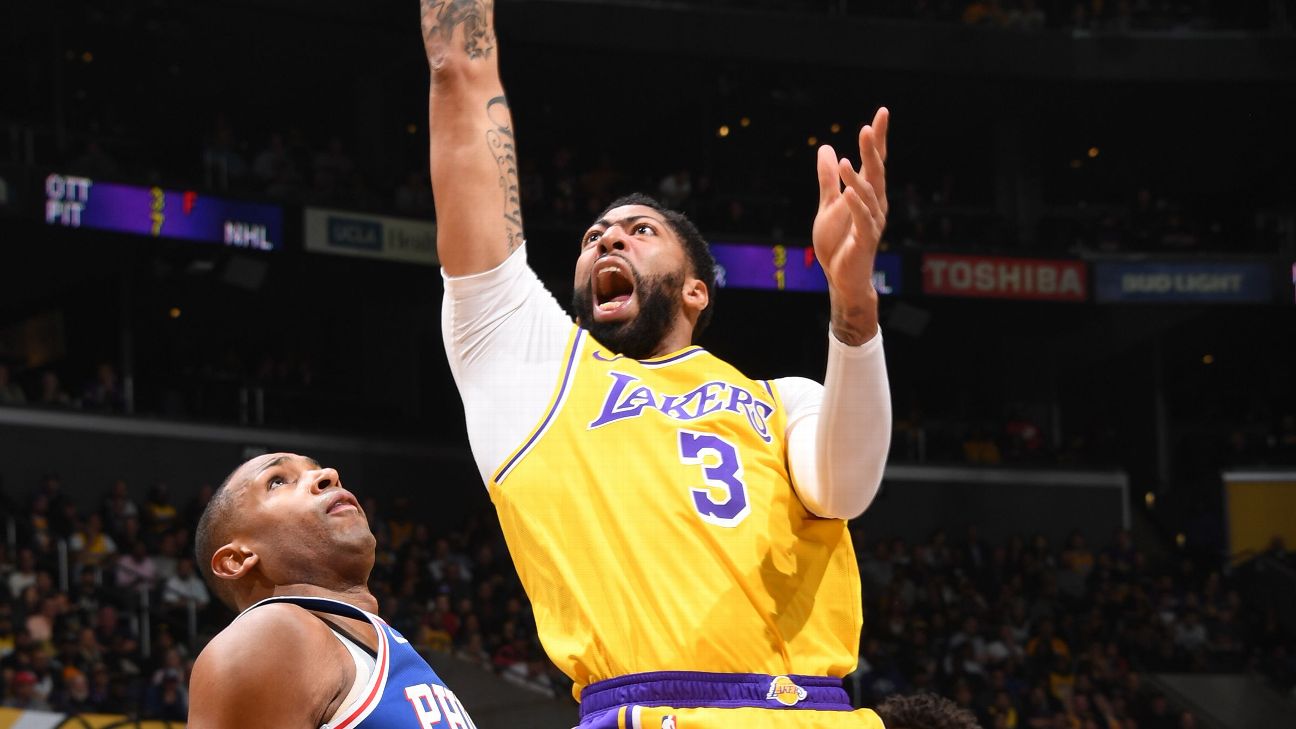 LOS ANGELES -- In an intimate gathering of season-ticket holders Monday, Lakers owner Jeanie Buss shared how excited she feels to have her team break its six-year postseason dry spell next month, thanks in large part to an offseason trade with theNew Orleans Pelicansfor the next great Lakers big man.

"In order to get a great talent like Anthony Davis, you have to give up something great," Buss said. "But to have Anthony Davis as a Laker really is just ... he's even more impressive than I ever thought he would be. And so, it's exciting what we have."

A night later, Davis played one of his best games since joining the purple and gold, filling the box score with 37 points, 13 rebounds, 4 steals, 2 assists and 2 blocks in a 120-107 win over the Philadelphia 76ers.

"AD was going nuts," LeBron Jamessaid. "It was fun."

"I think you've seen a little bit of a different Anthony Davis this whole season than we've seen in his prior stop in New Orleans," Lakers coach Frank Vogel said after Tuesday's victory extended his team's Western Conference-leading record to 47-13. "I don't know if it's different today than it's been most of the season. Ultimately, I think we're going to see it when we get to the playoffs."

The playoffs are more than five weeks away, allowing plenty of time for fine-tuning, but Davis showed the Sixers he has a switch that can be flipped that turns him from big man to beast.

After starting the game 2-for-7 from the field, Davis caught fire, scoring 18 points on 7-for-7 shooting in the second quarter. He finished 13-for-19, including 4-for-5 from 3, but it was his defense that Davis wanted to talk about.

"It started with the defensive end, coming out and just being hungry defensively and making the right plays," said Davis, whom teammates and coaching staff have been touting as the NBA Defensive Player of the Year for months. "And then that leads to our offense; and once one guy got it going, kind of contagious and we all just got it going on offense. But it started with our stops."

For James, his recognition of Davis' potential value to the franchise started long before Buss' remarks. After publicly opining to ESPN in December 2018 about what a trade for Davis would mean for Los Angeles, now James gets to see his targeted teammate on his side every game.

"It's everything I expected and more," James said. "Obviously, that's why I wanted him here. When you get a generational talent like that and you got an opportunity to get him, you just try to do whatever you can to get him.

"I gave my opinion on what I thought he could bring to this franchise. I gave my thoughts about the player -- but not only the player, the person. Hopefully, they took my advice to heart. And obviously, ultimately they made the decision to do what we did in the offseason. It's no surprise to me."

"I already knew how incredible the guy is," James continued. "He had 50 [points] in the All-Star Game. You know, 30s, 20s, 40s and 20s he had when he was with the Pelicans and just doing the things he was doing at that size, there's not too many guys who have done that in this league."

Rajon Rondo, who teamed up with Davis in New Orleans in 2017-18, said he is used to seeing Davis go off like he did against the Sixers. Los Angeles erased an early 13-point deficit against a Philadelphia team that was playing without Joel Embiid, Ben Simmons and Josh Richardson thanks to a Davis-fueled 15-2 run to finish the first half.

"Typical AD show," Rondo said. "He makes it look so effortless. Very easily can just get the ball in the paint and score against anyone. When he's hitting the 3 like he did tonight, the closeouts become easier. He's able to get to the rim. He made some nice moves, some point guard moves tonight. He's fun to watch and fun to play with."

James, who finished with 22 points, 14 assists, 7 rebounds and 2 blocks, continued his MVP-worthy campaign in his 17th season.

Vogel credited James for being instrumental in Davis' growth in terms of preparation and mental toughness this season.

But Dwight Howard said the mentee has had just as big of an impact on the mentor.

"Well, AD has had an effect on LeBron," Howard said. "I think the way that he's playing, now LeBron's saying, 'I got to step my level of play up because AD, my running partner, every night he's there.' So I think he's made LeBron, he's given LeBron new life." 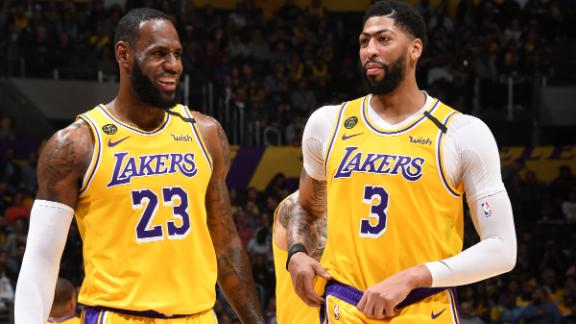