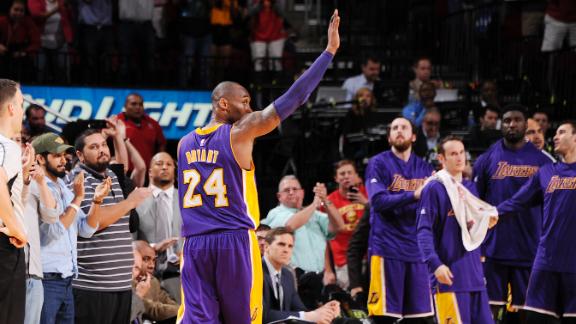 "Like I told him: 'This is the last hurrah. Let's have some fun. Let's go out with a bang,'" Scott said after shootaround at the team's training facility hours before the Lakers face the Utah Jazz in the last game of Bryant's 20-season NBA career.

A sellout crowd and between 400 to 500 credentialed media members will be on hand at Staples Center in what Scott said he expects to be a "crazy evening."

Red Hot Chili Peppers bassist Flea will play the national anthem. There will be a tribute video. And about two dozen of Bryant's former teammates are expected to attend, including Shaquille O'Neal, with whom Bryant won three championships.

"Everybody been keeping it kind of under wraps, but I think everybody should prepare for a show in terms of the stuff before and after and during the game, and after the game," Lakers guard Jordan Clarkson said. "It's just going to be a cool little thing to send him out."

Scott said he has an idea for how much Bryant will play and how many shots he wants the 37-year-old Lakers icon to take, but the coach didn't reveal any figures.

"A lot of shots, a lot of minutes," Scott said of Bryant, who didn't attend the shootaround. "I've got targets."

"I got a real good sense that we're going to try to get him the ball as much as possible. And we're going to try to compete as best as we can tonight. We don't know, and neither does Utah know their fate right now, by the start of this game they could be playing for their playoff lives. So we don't know. All we know is we got to come out here and we've got to play as hard as we can against this team and we've got to try to enjoy this moment, because this is something that a lot of these guys will never go through again."

The Jazz need a win and a Houston Rockets loss to snag the No. 8 seed in the Western Conference playoffs. The Rockets host the Sacramento Kings at 8 p.m. ET, some 2.5 hours before Jazz-Lakers tip off.

Utah coach Quin Snyder, a former Lakers assistant, said the evening will be a "celebration" of Bryant's career.

"You can be a part of that and appreciate that and respect that -- it's history -- but then come out and compete and play the game," Snyder said. "I don't think he's ever wanted someone to not compete against him in his life. We owe him that. That's what the game is about, whether you're on the playground or practice or whatever. It's about competing."

Added Jazz swingman Gordon Hayward: "I've thought about it since the schedule came out. People have been telling me about it and I've had ticket requests since November. This game's definitely been circled and marked on the calendar."

"He's a very proud man, as you [media] know," Scott said. "But I think when he addresses the fans tonight and he addresses his teammates, once this is over, us as the coaching staff, and people he's known for a long time, I'm pretty sure it's going to hit him for a minute there that this is it, this is my last and final game."

"I can't see Kobe being affected," World Peace said. "He prepared for this. This is what he wanted. It's not like a surprise to him. It's a surprise for everybody else and it's very exciting for everybody. Maybe it's bittersweet for him, but this is what he wanted since he was maybe 8 years old. He knew that this day was going to come where he'd retire and it was going to be the biggest day ever."

For the Lakers, Wednesday night marks the end of Bryant's season-long farewell tour.

"It's crazy, to be honest with you," Clarkson said. "Kind of sad and exciting at the same time. I seen him growing up, watching him, now seeing him on his way out, being to have an opportunity to play alongside him is a blessing and it's unreal and surreal still. I'm still looking at it right now as an experience and stuff."