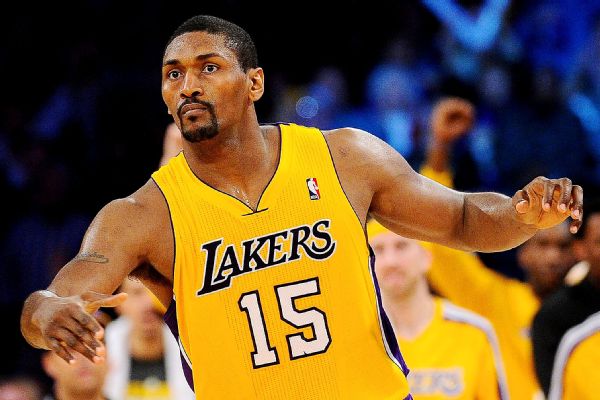 The odds are against Metta World Peace making the Los Angeles Lakers' opening night roster, but the Lakers have interest in keeping the veteran forward around as an assistant coach if they can't make room for him as an active player, according to league sources.

Sources told ESPN.com that World Peace's impact as a mentor to young players last season was a big reason they invited him to training camp again under new coach Luke Walton.

This time, though, competition is much stiffer for the Lakers' 15th and final roster spot, thanks to the post-Olympics signing of China star Yi Jianlian and the strong play of camp invitee Thomas Robinson.

Sources say World Peace's preference, at age 36, is to continue his playing career, even if the Lakers ultimately decide they won't keep him and that forces him to look elsewhere. L.A.'s decision must be made by Monday at 5 p.m., when all NBA teams are required to get down to 15 players in advance of the first night of the regular season.

Yi, who can operate as a backup center as well as a floor-stretching forward, is regarded as the favorite to win the duel for the Lakers' last roster spot, after L.A. signed him to a one-year, $8 million deal to lure the former Milwaukee Bucks lottery pick away from his native China and back to the NBA. But because of the unique way the contract is structured, only $250,000 of that total is guaranteed, with Yi required to earn $6.8 million in what the league deems "likely" bonuses to collect the full amount.

Robinson, another former high lottery pick and a dogged offensive rebounder, has complicated the decision for the Lakers by playing well this month in exhibition games.

The 25-year-old has already played for five NBA teams (Sacramento, Houston, Portland, Philadelphia and Brooklyn) since the Kings selected Robinson with the No. 5 overall pick in 2012.

Veteran guard Nick Young has been another October surprise, impressing the Lakers after a rocky 2015-16 season to entice L.A. to keep him for Young's ability to score.