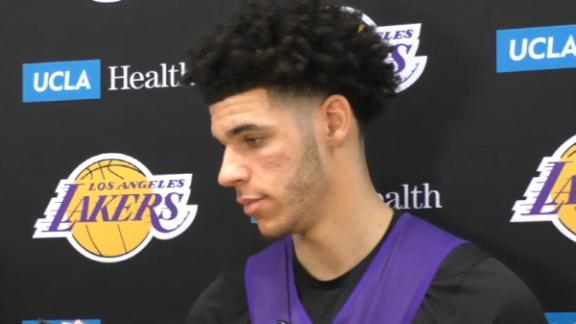 EL SEGUNDO, Calif. --Brandon Ingram said Lonzo Ball and the Los Angeles Lakers did not take kindly to Marcin Gortat's tweet about how John Wall "will torture" the rookie point guard when the Washington Wizards visit L.A. on Wednesday.

The Wizards center was responding to a video of Ball's father, LaVar, saying, "Washington is coming in Wednesday? They better beware because Lonzo ain't losing again [this week]."

Asked about Gortat's bravado toward his matchup, Wall said he plans to bring his A-game on Wednesday.

"Nah, no mercy," Wall told The Washington Post on Monday. "Certain matchups you really get up for. Like when you play [Golden State Warriors guard] Steph [Curry], you definitely want to have a good game. I'm playing against [Ball]. [Gortat] said what he said about me. I didn't say anything. His dad has been talking ... that makes me want to go out there and lead my team and play the best I can play."

A low-key Lonzo Ball said, "I don't pay no mind to it" when asked about what Gortat tweeted.

The fact that Ball was asked for his reaction to comments about him following remarks made by LaVar Ball is nothing new for the Lakers point guard. He had said coming into the season that he felt there would be a target on his back because of all the attention surrounding him, mostly because of his outspoken father.

Gortat's opinion of the Ball family dynamic may not be held by all the Wizards, as Washington coach Scott Brooks said he admired LaVar Ball's parenting skills.

"You know what, hey, people talk about [Lonzo's] dad all the time. Hey, I mean, my father left me at 2. I would love to have my father around like [LaVar] is around and talk to him and pump me up with confidence," Brooks said, according to The Washington Post. "To me, that's every son's dream. And for some reason he gets criticized. No question, he's a little ambitious at times [with] what he says. But he's around his son. I have no problem with that. And maybe he could temper it a little bit, but I would've loved to have my father do that."

Wednesday's game (ESPN, 10:30 p.m. ET) will be the stiffest test the No. 2 overall pick has had to face yet. He opened the season against the Clippers' Patrick Beverley, Phoenix's Eric Bledsoe and New Orleans'Jrue Holiday. But Wall is an elite point guard and widely regarded as one of the fastest, if not the fastest, players with the ball in the NBA.

"It's going to be a lot of fun. Like you say, he's one of the best point guards in this league," Ball said. "So I'm just going to go out there and compete and see what happens."

Ball said the quickest point guard he has faced in his career is Sacramento's De'Aaron Fox, who played Ball twice in college while the two were at Kentucky and UCLA, respectively. The two rookies have yet to face each other since the college season due to injuries that sidelined Ball in the summer league and preseason.

So far, Ball is averaging 13.3 points, 9.3 rebounds and 8.7 assists, but is shooting 34.8 percent from the field. Outside of his 12-for-27 performance against Phoenix, in which he barely missed becoming the youngest player in NBA history to have a triple-double by one assist, Ball has shot 4-for-19 in his two other games.

"I'd tell them to go study Reggie Miller's career," Walton said of critics of Ball's shot. "It doesn't look great. It can be an issue, yes. But if the ball goes in the net, which he shot over 40 percent from 3 in college, he has a track record of being a really good shooter. So for us to try to mess with it would be silly.

"I'm obviously not calling him Reggie Miller, but his shot probably could have been fixed by a thousand people who wanted to fix it and he is one of the greatest shooters our league has ever seen."

Walton also had plenty of praise for Wall, who will provide a stern challenge for Ball in just his fourth professional game.

"In my opinion he's the fastest player, point guard or any player in this league, with the ball in his hands, coast to coast," Walton said of Wall. "So we struggled a little bit with [DeMarcus] Cousins and Anthony Davis going coast to coast on us [on Sunday]. We got to be ready to wall up, and it is not his defender's job to stop him. It is the entire team."

Ingram said that the Lakers will rally around Ball.