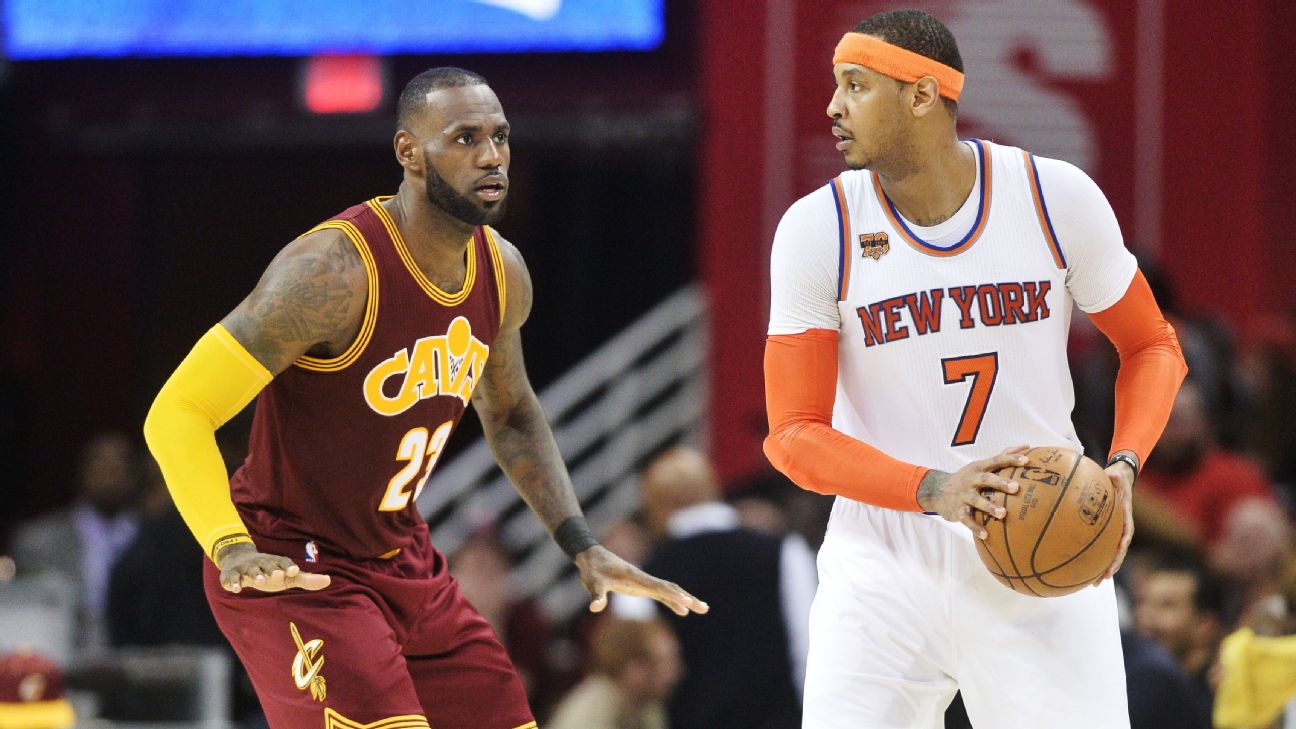 EL SEGUNDO, Calif. -- As much as Saturday will be a brand-new experience for LeBron James, playing his first official home game with the Los Angeles Lakers, he'll have a friend in the building making things seem mighty familiar.

The Lakers will be facing Carmelo Anthony and the Houston Rockets, and James and Anthony have gone through a similar song and dance before. James' first home game as a member of the Cleveland Cavaliers in 2003? There was Anthony on the other side with the Denver Nuggets. James' first home game in his second stint with the Cavs? Again, Anthony was an opponent with the New York Knicks. And now they'll do it again as a Laker and a Rocket.

"He's meant a lot," James said after the Lakers' morning shootaround. "I mean, obviously me and Melo have been very good friends before the spotlight and the NBA and everything and the coverage for quite a while now.

"We've always just talked about our journey throughout the whole thing no matter what cities we've been in. Just always been in on that brotherhood between us, [Dwyane] Wade and CP [Chris Paul]. It's weird. ... We've always had that direct correlation in my career so far."

Paul will be lining up against James too, as he won out in convincing their mutual friend in Anthony to play for his team.

When asked if James spoke to Anthony, who was waived by Atlanta after being traded from Oklahoma City this summer, about joining the Lakers this summer, he all but confirmed it.

The one major difference on Saturday compared to those past battles, however, is Anthony won't be greeting James in the center circle before tipoff. He's coming off the bench for the Rockets.

"It won't be strange. I mean, listen, once he gets in the game -- whenever that may be -- it's going to be the same as always," James said. "Just that brotherhood, just knowing how far we've come in our career to still be at this point in our career.

"But it won't be strange. It was strange the first time I played against him when I was in a Heat uniform and he was in a Knick uniform. That was kind of strange. But after that, no. Other than that, it's been pretty good."

The Lakers and Rockets are both hoping for a pretty good outcome for the game because a loss would mean an 0-2 start for either franchise. L.A. opened things up with a 128-119 loss to the Portland Trail Blazers on Thursday. Houston lost 131-112 to the New Orleans Pelicans earlier that night in its season opener.

"Whether Houston won or lost, they're most likely going to be hungrier and sharper tonight," Lakers coach Luke Walton said. "But they are a very good team: obviously playoff tested and went to the conference finals last year. So it's going to be a great opportunity for us to battle them tonight."

Walton said he will use the same starting lineup -- James, Brandon Ingram, JaVale McGee, Rajon Rondo and Kentavious Caldwell-Pope-- that he used against the Blazers.

Just like no one could have predicted where James and Anthony would have ended up 15 years later after that first regular-season meeting in Cleveland, James pointed out that Saturday's game will have little bearing on where the Lakers ultimately end up this season.

"There's a lot of excitement today. From our fans, I believe, from the city. We're excited to showcase to our fans what we've been working on for the last month," James said. "I can promise to our fans we're not the team tonight that we're going to be in January, February. But we will be extremely excited to get out there and play for them."