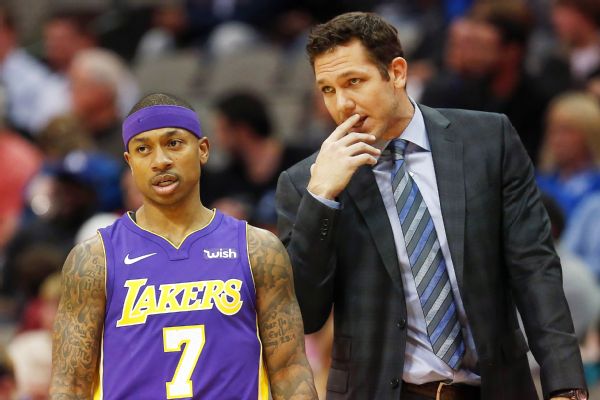 The team announced Thomas' recovery time after he had the surgery Thursday afternoon.

Thomas opted for surgery after he flew to New York to have his hip further evaluated. The procedure was to "clean up the joint of all inflammatory debris related to his injury from last season," Dr. Bryan Kelly of the Hospital for Special Surgery in New York told ESPN.

Thomas played in a total of 32 games this season for the Lakers and Cleveland Cavaliers.

He did not play in a game until Jan. 2 this season after rehabbing his hip. After becoming an MVP candidate with his play for the Boston Celtics last season, Thomas was shut down after two games in the Eastern Conference finals because of a right femoral-acetabular impingement with labral tear.

He was traded to Cleveland in the Kyrie Irving deal before he was traded again at the trade deadline to the Lakers.

Thomas, who will become an unrestricted free agent, averaged 15.6 points and 5.0 assists with the Lakers.

Thomas will spend time between his offseason home in Seattle and Los Angeles rehabilitating the hip over the next few months, and the Lakers have told Thomas that he would be welcome to use the team's practice facility throughout his rehabilitation program.

Because of the ongoing issues with his hip, Thomas is unlikely to get a significant long-term financial commitment on the free-agent market. The Lakers represent the possibility of a bridge season to show his ability to return to health and a high level of performance.

Lakers coach Luke Walton said Thomas always put the team's rebuilding goals ahead of his own personal goals. Thomas wanted to start but accepted his primary role of coming off the bench and mentoring the younger Lakers.

"[Thomas] never complained," Walton said. "Every time I asked him how he was feeling, he said, 'I feel great coach.' Obviously, he was in some pain and had some discomfort. I didn't know about it because he was always saying how good he felt. He really helped our team with obviously the way he can score the ball, but the things that does from a point guard position where he was constantly telling guys where to be, how to set the screen, where to set the screen, which is valuable for young players. I was very pleased with the time that he spent with us.

"The team's agenda always came first and he never complained about it once ... him and Julius [Randle]had a nice connection going. I loved the banter between him and [Kyle Kuzma] out there on the floor. He was great. You go down the line, he affected all the guys that played minutes for us, the young guys."

Brandon Ingram said Thomas made an impact with his leadership and ability to draw defensive attention.