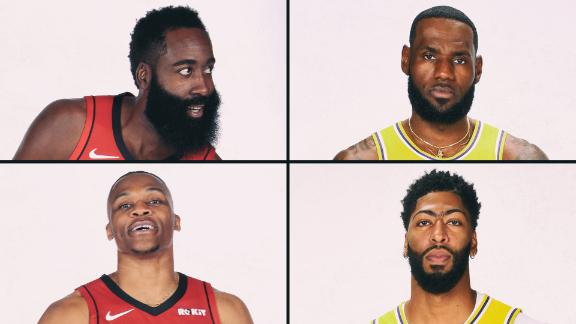 The Los Angeles Lakers' record against teams with losing marks this season before Wednesday was both noteworthy and improbable. It stood as both a testament to their collective professionalism and a representation of a statistical anomaly likely destined for a run-in with mean regression.

In falling 119-118 to the Orlando Magic, who entered Staples Center two games under .500, the Lakers dropped to 22-1 against sub-.500 teams. They were again short-handed, playing without Anthony Davis (glutes) and Rajon Rondo (finger) before losing Alex Caruso to a concussion.

When the Lakers visit the Houston Rockets on Saturday at Toyota Center, odds are good L.A.'s roster will not be whole. Given their previous efforts, who is and who isn't available won't impact how the Lakers approach an opponent expected to be on par come the postseason.

"We don't pay attention to records," Lakers forward LeBron James said. "We're all NBA players, regardless of the record. And you have to go out to compete and to win, no matter what the record is. We respect every opponent and that's what it's all about."

The Lakers own the best record in the Western Conference despite their injury woes. Although James produced a 19-point, 19-assist effort against the Magic, it was the bench brigade paced by Quinn Cook (22 points), Troy Daniels and Kentavious Caldwell-Pope (17 points apiece) that kept the Lakers in contention.

Cook and Daniels are typically spectators when the Lakers are at full strength, but even in defeat, the L.A. showed the potency of what it has in reserve.

Conversely, the Rockets offered another uninspired display against the Portland Trail Blazers on Wednesday, falling 117-107 at home to lose both games of a back-to-back for the first time this season. Houston has dropped three of its last four games.

When asked why his team appears so discombobulated on occasion, particularly defensively, Rockets coach Mike D'Antoni struggled to muster the words to fashion a legitimate excuse.

"I was trying to spin it some way but I couldn't do it with a straight face," D'Antoni said. "It's concerning but the focus to me is not on getting it right, the focus is more looking at the back of the jerseys instead of the front of them. We just need to get over it and we will. We'll get back.

"Right now we're shaky, but we have veterans that will right the ship."

One of those veterans, James Harden, made clear that the Rockets are having ongoing dialogue related to fixing what ails them. There is an underlying assuredness that Houston will indeed get the wheels back on the track, but it isn't folly to describe their current state as vulnerable.

"We will. I think everyone goes through tough times throughout the course of the year. For us, this is now. We've got to come together and figure out what the problem is and go out there and try to fight through it."