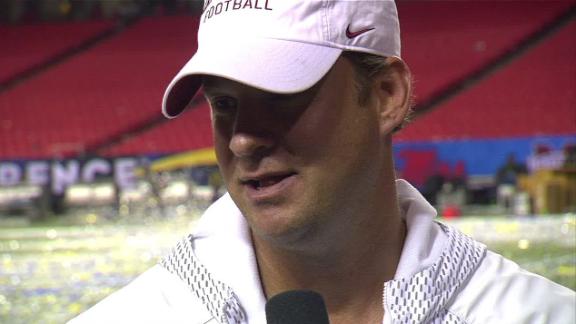 ATLANTA -- Lane Kiffin said he wants to stay on as Alabama's offensive coordinator through the playoff, regardless of whether he accepts another coaching position elsewhere.

Kiffin, in his third season at Alabama, is reportedly in the running to become LSU's next offensive coordinator. Sources also told ESPN's Brett McMurphy that Kiffin will interview on Sunday for Houston's head-coaching vacancy.

Kiffin said he wasn't worried about the question of whether he wanted to be a head coach again. Asked whether he sees any circumstance in which he would be at Alabama for another season, Kiffin said, "Yeah, I sure do."

"I'm happy to be here," he said after No. 1 Alabama's 54-16 victory over Florida on Saturday in the SEC championship game. "Coach [Nick] Saban and I talked this week about what a great experience it's been. ... We'll keep going from here. You know this season isn't over.

"People talk about next year, but we have a lot of work to do."

With true freshman Jalen Hurts, Kiffin has won three SEC titles with as many quarterbacks. The offensive coordinatorsaid he has learned at Alabama how to build an offense around players.

"It's been a great experience," he said. "I'm a lot better for it, three years later, for being able to go through that."

Saban was asked Saturday if he expected any member of his staff who might be offered another job to continue coaching with the Crimson Tide through the playoff or to leave immediately.

"I think it depends on the circumstance and the situation, and I think those are things that people have to agree on relative to what their goals and aspirations are, the circumstance and situation that they're in, their commitment to our players and our team, and do we think it's going to affect our organization long term," Saban said. "So those things are always evaluated."

Earlier this week, Saban said Kiffin is "absolutely" ready to be a head coach again.

The Crimson Tide head coach praised Kiffin's ability to mold his offensive systems around his Alabama players during his three years with the Tide, despite working with three different starting quarterbacks. Kiffin was able to help Alabama's offense evolve from its normal run-first, pro-style and play-action attack to a more spread look that has featured a lot more zone-read in 2016.

"Those are signs of tremendous maturity as a coach who is not just committed to a system but is committed to doing things that he has to help players be successful," Saban said. "I think he's proven when he was a head coach he had a reasonably good amount of success -- much more than I think he gets credit for -- and he's done a phenomenal job in the three years he's been with us."

Kiffin previously served as USC's head coach for three years, compiling a 28-15 mark before he was unceremoniously fired in September 2013 after a 3-2 start. He also went 7-6 during his only year as the Tennessee Volunteers' head coach in 2009. In addition, he was the head coach of the NFL's Oakland Raiders for 20 games.

Information from ESPN.com's Edward Aschoff was used in this report.