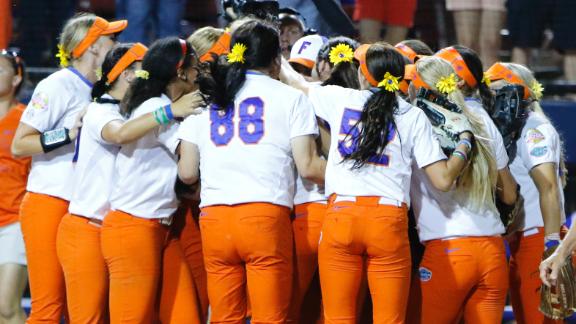 OKLAHOMA CITY -- Lauren Haeger had a home run and three RBIs against Michigan, but what she didn't do Monday night could play a more important role in Florida's championship hopes.

Haeger, the national player of the year, is also her team's ace pitcher. After winning three games at the Women's College World Series, she got a break from the mound Monday, and her teammates handled Michigan anyway.

Freshman Aleshia Ocasio and sophomore Delanie Gourley combined to beat the Wolverines 3-2 and put the Gators within one win of a repeat national title.

Haeger threw 160 pitches against Auburn on Sunday, so coach Tim Walton didn't want to use her. He didn't need to. Ocasio went six innings and gave up two runs to earn the win, and Gourley got the save for the Gators (59-6).

"First of all, I'm just so proud of them," Haeger said. "They work so hard, just like I do. They deserve what they did tonight. Aleshia is amazing, Delanie is amazing and I've told them the whole time that I'm going to need them to have my back this whole entire tournament."

The teams will meet again Tuesday night in Game 2 of the best-of-three championship series, and the Wolverines likely will have to deal with a rested Haeger.

Michigan expected to see her Monday.

"We prepared for her," Michigan coach Carol Hutchins said. "It was in the back of my mind -- I knew it was possible they wouldn't start her, but I don't coach their team. So we just had to prepare, and ultimately, regardless of who is pitching, we just need to have good at-bats and see the ball. I thought we gave away a lot of at-bats. We swung at a lot of their pitches."

"We didn't really come out to play to win until about the fifth inning," Hutchins said. "Our energy -- we seemed a little tentative."

Haeger opened the scoring with a two-run homer in the bottom of the first inning, her third home run of the World Series. In her next at-bat, she doubled in a run to give Florida a 3-0 lead in the third inning.

Michigan's Abby Ramirez singled in the sixth to score Olivia Richvalsky and Kelsey Susalla and cut Florida's lead to 3-2.

Michigan had runners at first and third with no outs in the seventh against Gourley but did not score. Sierra Romero, who walked to start the inning, advanced to second on a passed ball and reached third on Kelly Christner's single. Susalla hit a ball hard to shortstop, and Romero hesitated because she was unsure whether the fielder would try to throw her out at home. Instead, Florida went for the double play, making it a missed opportunity for Michigan.

"She hesitated obviously, because she doesn't want to make the out at the plate," Hutchins said. "Once you hesitate, you can't go. That is the right decision because it was a quick play, bang-bang. They made a great play. Give their defense all the credit in the world. Their defense is fantastic. When I saw them [try to] turn the double play, I was yelling, 'Go, go,' but it was too late. She had to hesitate, and she made that decision, and that's the way it is."

Gourley then struck out Lauren Sweet and got Lindsey Montemarano to ground out to end the game. It was Gourley's fifth save of the season.

"It was a big-time rough situation, but they prepare us every game, and every game, they tell us they're going to need a whole pitching staff," Gourley said. "All week, Aleshia and I have been behind Lauren's back. We've been ready at any moment, and in that time, I was just ready to execute and make my pitches."

Although disappointed, Michigan sees no reason why it can't win two straight and claim the school's second national title.

"They still have to beat us twice," Romero said. "So the second time is going to be even harder. We'll come out there ready to fight. And we're not going to give it to them easy."

Florida's Haeger blasts HR in WCWS finals
Florida's Lauren Haeger puts the Gators on the board with a two-run home run in the first.

Meet the Gators
Florida softball players Lauren Haeger, Alicia Ocasio and Kelsey Stewart share some fun facts about what they enjoy off the field.