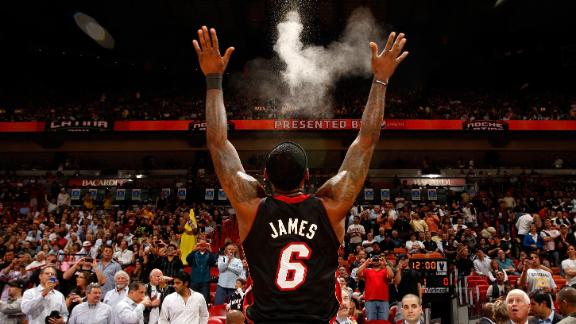 With an eye toward maximizing the future of the salary cap, LeBron James finalized his contract with the Cleveland Cavaliers on Saturday.

James signed a two-year, $42.1 million deal, sources familiar with the process told ESPN.com, with the goal of re-signing with the Cavs before the 2016-17 season when a new television deal is expected to create a large jump in value of the maximum contract.

As part of the deal, James will have an option to become a free agent next summer but is fully committed to the Cavs long term, sources said.

Cleveland officially announced Saturday that James had signed with the team, but did not provide any terms of the contract in a release, citing league policy.

"We could not be happier to welcome LeBron James home," Cavaliers general manager David Griffin said in a statement Saturday. "Yesterday, LeBron, through his essay, told us he wasn't going anywhere except Cleveland and that 'Cleveland is where he always believed he would finish his career.' These words and commitment put all of us, including LeBron, in the best position to build our franchise the right way and achieve the kind of goals we all know are possible. Expectations will be at the highest levels but no one should expect immediate and automatic success.

"We can't wait to get started and look forward to his leadership, on and off the court, for many years to come."

Depending on how the new television contracts are put together, the salary cap is projected to leap to as high as $80 million in 2016. There is also uncertainty with the current collective bargaining agreement starting in 2017, another reason James wanted to keep his long-term options open when it comes to the structure of his contract.

James' off-court earnings, which top $40 million per year according to some estimates, allow for him to take some short-term risk to maximize long-term earnings.

James has earned $129 million over his 11-year career but has only earned the max salary three times during that span.

Meanwhile, ESPN.com reported Friday that Minnesota Timberwolves forward Kevin Love is naturally "intrigued" by the idea of playing alongside James and would welcome a trade to the Cavaliers now that Cleveland has managed to sign him. Any team trading for Love has to feel strongly that it can keep the All-Star power forward before surrendering quality assets for him.

Love has made it clear to Wolves management since the season ended that he is determined to become a free agent at the first opportunity in July 2015, which has put Minnesota in a position where it has to strongly consider trading him or risk losing him for nothing next summer.

One source close to the situation told ESPN.com's Marc Stein that the contract structure James agreed to is unlikely to deter Love from signing a new deal with the Cavs in the event Cleveland completes a trade for him.

While his representatives handled the finer points of his contract, James himself was in Brazil on Saturday where he plans to attend Sunday's World Cup final.

Though his signing was the biggest thing in the basketball world this week, James, who is a minority investor in soccer club Liverpool of the English Premier League, said the World Cup final is a bigger deal than the NBA Finals "in the sense that it's the world and you have so many countries here."

ESPN.com's Marc Stein and The Associated Press contributed to this report.

LeBron Agrees to 2-Year Deal With Cavaliers
ESPN.com's Brian Windhorst discusses why LeBron has agreed to a two-year deal with the Cavaliers.

Expectations For Cavaliers
Jeff Van Gundy discusses whether the Cavaliers are title contenders with the addition of LeBron James.

Simmons On LeBron's Return To Cavs
Bill Simmons reacts to the news that LeBron James is returning home to the Cleveland Cavaliers.

Stephen A. Smith: LeBron's Return A Fabulous Story
Stephen A. Smith explains why he loves LeBron James' decision to return home to Ohio to play for the Cleveland Cavaliers.

LeBron James Returns To Cleveland
Chris Broussard, Marc Stein and Brian Windhorst react to the news that LeBron James will return to the Cavaliers.

LeBron Enough To Make Cavs Contender?
P.J. Carlesimo doesn't think the Cavaliers' roster, including the addition of LeBron James, is enough to make the team a serious contender next season.

What's Next For The Cavaliers
Brian Windhorst discusses Cleveland's interest in acquiring Kevin Love and the other players they may go after.