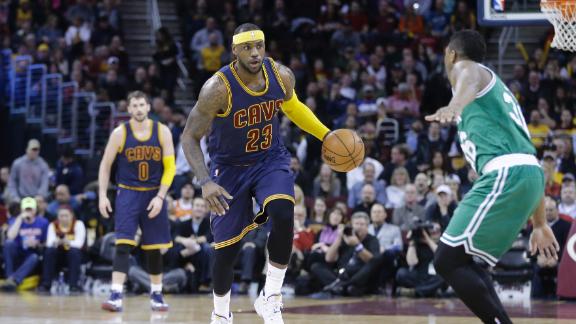 CLEVELAND - LeBron James continued to make his mark on the record books Tuesday, as he passed former teammate Ray Allen for No. 21 on the NBA's all-time scoring list in theCleveland Cavaliers' 110-79 win over the Boston Celtics.

James' fast-break layup off a Kyrie Irving assist with 7:49 remaining in the third quarter gave him 25 points for the game, edging him past Allen. He finished with 27 points and is now three points ahead of Allen's 24,505-point career total.

"I didn't know until I came to the bench and the guys congratulated me, and I was like, 'For what? For making a layup?'" James recalled postgame. "They go, 'You passed Ray Allen.' That's one of my best friends. That's a guy that I competed against, I grew up watching and then to be able to team with him the last two years when I was in Miami, I learned so much from him about work ethic, about being a professional, and it just added on to my game.

"To know that I passed him tonight, it's very humbling. I guess I've done some pretty good things in this league so far."

It was Mike Miller, a teammate of both James and Allen in Miami, who brought the achievement to James' attention.

"Mike Miller mentioned something to him on the bench, saying, 'I know you don't care about this kind of thing, but congratulations,'"Kevin Lovesaid. "And [James] just kind of nodded his head and kept it moving. But I think he's set his eyes on bigger things."

James has been stacking up the accomplishments as of late, having recently passedAllen Iverson on the career scoring list and replacedScottie Pippenfor most career assists by a frontcourt player.

James is sixth in career scoring among active players. He is 307 points behind passing the next retired player, Patrick Ewing, for No. 20 on the all-time list.

A reporter asked James whether the fact that he passed Allen could give the sharp-shooting guard incentive to return to the NBA.

James met with Allen in January in Miamito try to recruit him to the Cavs, but Cleveland has since filled their vacant roster spot with Kendrick Perkins.Allen remains unsigned by any NBA team.

LeBron, Cavs Bounce Back Big
LeBron James scored 27 points and passed Ray Allen for 21st place on the all-time scoring list, as the Cavs followed up a loss to the Rockets by defeating the Celtics 110-79.