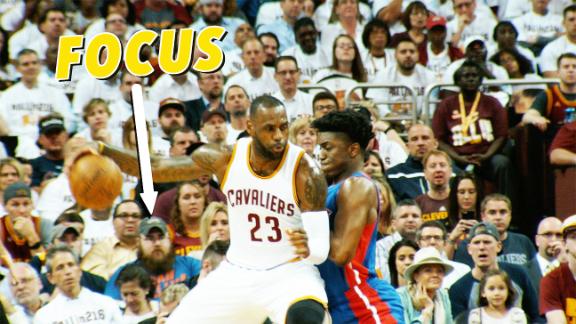 AUBURN HILLS, Mich. -- LeBron James and the Cleveland Cavaliers responded to the Detroit Pistons' physical tactics and supposed psychological warfare with a collective yawn on Friday.

If Stanley Johnson is "definitely" in James' head -- as the Detroit rookie claimed after the Cavs went up 2-0 in their first-round series on Wednesday -- you wouldn't know it from James' demeanor before shootaround Friday morning.

"No [response]," James said of Johnson's remarks. "My only mindset right now is how I can help this team get a Game 3 victory playing in a hostile building that I've played many series in before. So that's what my focus is."

"I think my comments, it wasn't really an outburst," Johnson said after Friday's shootaround. "I just think, at this point in time right now, it's all about Game 3. What I said before really doesn't matter. It's in the past. We've got to control what we can control now. That's it."

When pressed about whether Johnson was trying to use James' fame to make a name for himself -- a tactic that players such asDeShawn Stevenson and Lance Stephenson have tried in past playoff series against the four-time MVP -- James again brushed off Johnson's comments.

"For me, at the end of the day, I can control what I can control, and that's how I go out and play the game," James said. "There's always going to be conversation outside of the four lines, and how much you can indulge into it can take away your focus from what the main thing is.

"I know what the main object is here, and that's to be the leader of this team and get these guys ready for a very high-intense game tonight and moving forward. So, I don't get caught up into anything."

According to ESPN Stats & Information, James was 6-for-6 against Johnson as his primary defender in Game 2.

Pistons coach Stan Van Gundy on Friday said he cringed a little when seeing Johnson's comments and has talked to his small forward.

"Coach Van Gundy, he's an honest guy with me," Johnson said. "He just wanted to make sure my head was in the right place, pretty much. ... As much stuff can be talked, and things can be said on the court, it's all about who wins and who loses. This is not a LeBron James-Stanley Johnson [thing], this is not a LeBron James-Stan Van Gundy [thing]. This is Cavs versus Pistons, Pistons versus Cavs. And it's Game 3 in our house, so we got to handle business."

"...Choose your words [carefully], but I love his intensity. I love his aggressiveness. I love his confidence. Just tone it down a little bit."

Said Van Gundy:"It's all over. It means nothing right now. We're just focused on trying to get a win tonight."

The Pistons did seem to get under James' skin briefly in Wednesday's Game 2 when Andre Drummond delivered a blow to his back and Morrisaimed a shot at his ribs in the fourth quarter, prompting James to threaten to retaliate against Morris in a heated conversation with one of the game officials.

James has since cooled down, now saying he didn't think Morris and Drummond were targeting him with unnecessary contact.

"No, I don't think so," James said. "And even if they are, that's not even what I'm concerned about. My concern is I got to continue to be aggressive, put pressure on their defense. Continue to find my guys when they're open and continue to defend and help my guys on the glass with big Drummond."

Cavs coach Tyronn Lue, in a conference call with reporters Thursday, said the Cavs were considering sending a tape of Morris' and Drummond's bullying tactics to the league office to complain.

James, however, was against the move, and a source told ESPN that the Cavs did not submit any video for review.

"I hope we don't send anything in to the league because it's not about that," James said.