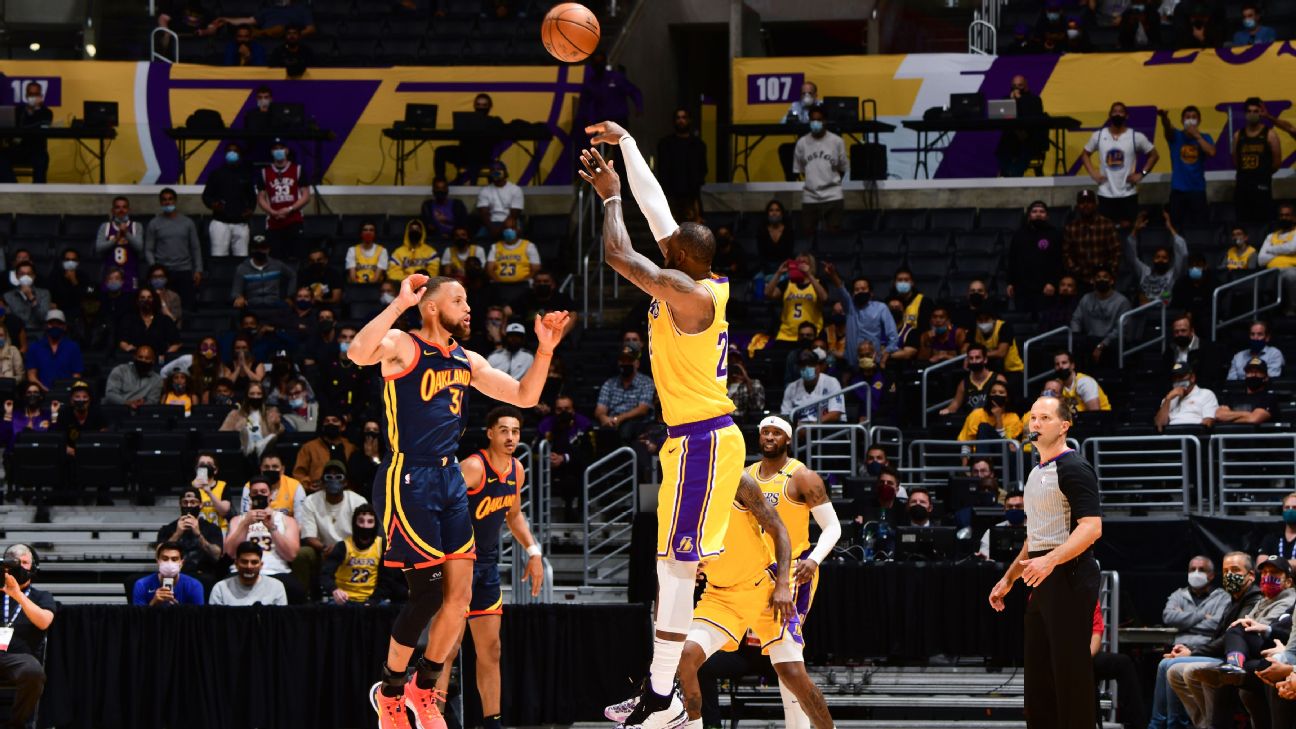 LOS ANGELES -- The Los Angeles Lakers' postseason run opened with Wednesday's win-and-you're-in play-in game against the Golden State Warriors. And it took everything the defending champions had to win it, 103-100.

LeBron James' 34-foot 3-point heave to beat the shot clock buzzer fell through the net with 58.2 seconds remaining, breaking a tie at 100 and giving L.A. the lead for good.


James hit it with his old NBA Finals foe, Stephen Curry, a man who has made a name for himself on shots just like that, closing out on him on defense.

"It was a great shot," Curry said. "That was a tough one because you don't really expect it to go in. ... Everything changes when it goes in. All-time great players make great shots. That's what happens.

"No different tonight, but it's a tough one."

James, playing on a right ankle that caused him to miss 26 of the Lakers' final 30 games because of a sprain, finished with 22 points, 11 rebounds and 10 assists for the first play-in triple-double in the tournament's two-season existence.

With the win, the Lakers claimed the No. 7 seed in the Western Conference playoffs, and they will face the second-seededPhoenix Suns in the first round. L.A. opened as a -300 favorite to win the series, according to Caesars Sportsbook by William Hill. It's the first time in at least the past 30 years that a 7-seed is favored over a 2-seed, according to ESPN Stats & Information research.

"The West is a gauntlet of guards, starting tonight with Steph and obviously with our next-round matchup, Book [Devin Booker] and CP [Chris Paul]," said Alex Caruso, who led L.A.'s bench with 14 points and three steals. "It's going to be a handful."

The Warriors will play the Memphis Grizzlies for the 8-seed on Friday in San Francisco. Memphis defeated the visitingSan Antonio Spurs100-96 in Wednesday's other play-in game.

James' clutch 3 against Golden State was his longest make of the season. According to ESPN Stats & Information research, it also was the longest go-ahead shot in the final three minutes of any game in his career.

About a minute before hitting the game winner, James was shaken up when he drove to the basket and took a hard foul to the face from Draymond Green.

"After Draymond's finger to the eye, I was literally seeing three rims out there," James said. "So I just shot at the middle one. And I was able to, with the grace from the man above, I was able to knock it down."

When James trotted back down the court after the make, he turned toward the Lakers' bench, waved a hand in front of his face and said, "I can't see."

Warriors coach Steve Kerr gave credit to James for delivering in the clutch but also praised his team's effort.


"He made a great shot, obviously, at the end," Kerr said. "We've played against him so many times over the years, we know how good LeBron is, what he's capable of. He came through for them.

"I just love our guys' effort the whole game. Draymond was amazing tonight guarding [Anthony] Davis, and I thought [Andrew Wiggins] did a great job on LeBron. Our guys really, really just battled and competed. I couldn't be more proud of the team for what they've become over the last couple of months."

The Warriors, led by Curry's 37 points, couldn't get their star one last shot to try to tie it, as Kent Bazemore turned it over, throwing an errant inbounds pass with 2.1 seconds left that bounced feebly down the court as time expired.

The game mirrored the Lakers' struggles for much of the second half of the season, as L.A. initially struggled to find a rhythm before storming back at the end.

A Davis alley-oop dunk on the first play of the fourth quarter tied the score at 79 -- the first time L.A. had knotted the score since the opening tip -- and the Lakers opened up the floodgates from there.

Kyle Kuzma scored on a hook shot from 8 feet out to give the Lakers their first lead of the night, and James, defended by second-year guard Juan Toscano-Anderson, went to work.

James scored on isolation drives on consecutive possessions, giving the Lakers an 85-79 lead with 9 minutes, 50 seconds to go in the fourth.

Davis said that James was motivated by trash talk from Toscano-Anderson earlier in the game.

"You never want to poke the bear," Davis said after finishing with 25 points and 12 rebounds. "It's funny. I told Jordan Poole, when we both got the double techs, I came down and hit the midrange [shot] and I said, 'You done woke me up.'

"So, it's playoff basketball. That's going to happen. Anderson did the same thing with LeBron, and we're confident enough in our game, especially when we're struggling, that you never want to poke the bear."

The Warriors, pushed by the league's leading scorer, Curry, did not go quietly into the night.

Golden State mounted a comeback of its own, erasing L.A.'s lead -- which swelled to as many as seven -- to take the lead back 96-95 on a Poole 3-pointer with three minutes, 43 seconds remaining in the contest.


Curry drove and hit a floater off the glass the next trip down, putting the Warriors up by three on the next possession.

Things couldn't have gone much worse for the Lakers in the first half, with James shooting 1-for-7, Dennis Schroder shooting 1-for-9 and Davis going 2-for-12.

"I just told them, 'It's on us. We gotta go. Us three, we just gotta be better on both ends of the floor,'" Davis said, recalling a huddle with James and Schroder. "And they both said, 'Say less.' And we were able to take off a little bit."

It was the Lakers' defense, ranked No. 1 in the regular season, that kept the Warriors from breaking the game open. Even with Curry beating the halftime buzzer with a 3-pointer in front of his team's bench -- sending his teammates into a euphoric tizzy -- Golden State's lead was 13 heading into the locker room.

"Dudz and Smoove [Morris] pretty much got on our ass at halftime," James said. "They got on us; they showed us that we gotta pick it up, pick this s--- up. They brought the fight to our building, and we gotta bring it right back. When guys like that speak, you listen."

Andre Drummond, L.A.'s big in-season acquisition after being signed from the buyout market, looked out of place, registering more fouls (three) than points (two) in the first half.

Lakers coach Frank Vogel stayed with his starting lineup, Drummond included, to begin the third quarter, and the big man's presence started to pay off. His defensive rebound and look-ahead pass to James early on in the third led to an and-1 layup for the Lakers star, prompting Golden State to call a timeout just 1 minute, 28 seconds into the third with L.A. cutting its deficit to six points.

A Schroder 3 a couple of minutes later brought L.A. within one, at 57-56, but the Warriors -- with James on the bench to rest -- responded with a 15-4 run of their own to balloon their advantage back to 12.

L.A. responded again, however, and trailed by just two headed into the fourth quarter.

"We're looking forward to what's going to be in store for the postseason," James said afterward. "And we got one postseason game under our belt. Look forward to the next ones." 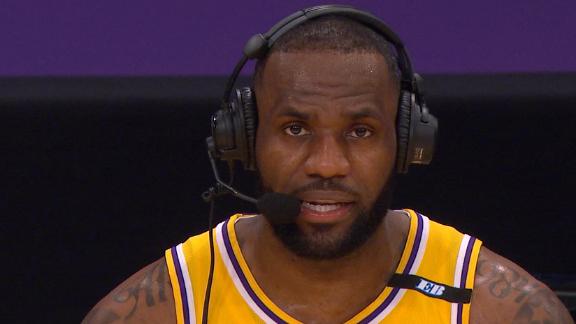 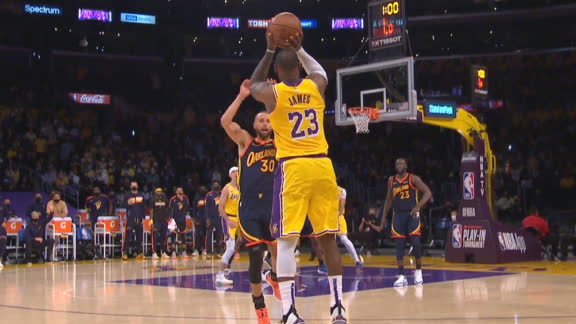