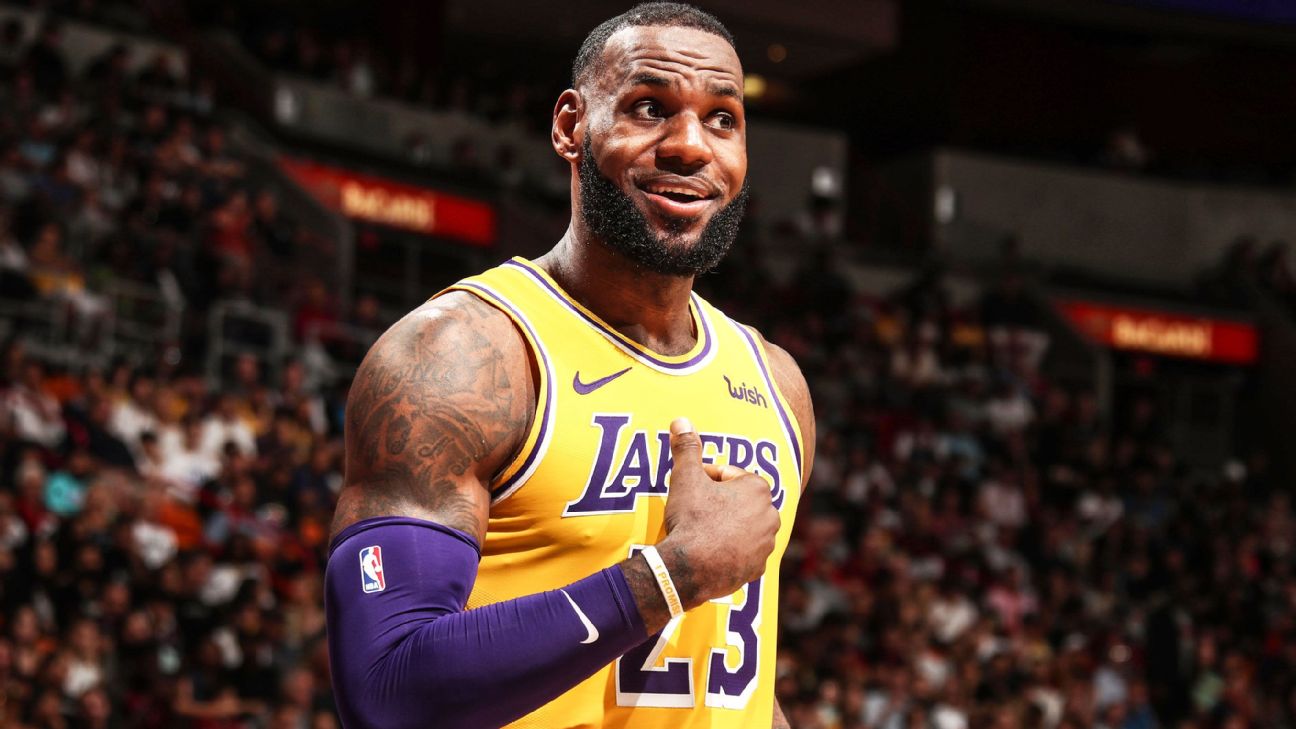 ESPN
By Dave McMenamin
LOS ANGELES -- As much as the on-court product this season has been can't-miss fodder for Los Angeles Lakers fans hungry for a winner, it was a courtside fan rooting on the Lakers' 122-101 win over the Atlanta Hawks on Sunday who stole the show.

The fan just so happened to be Kobe Bryant.

"That's one of the greatest players to ever play this game, taking time out of his day on a Sunday," said LeBron James, who put up 33 points, 12 assists and seven rebounds. "So I'm just trying to put on a show for him and give him a reason, like, 'OK, we might come to another game.'"

Bryant, in the building to promote "Epoca: The Tree of Ecrof," the children's fantasy novel he created with author Ivy Claire, played the dual role of proud Laker alumnus and proud papa, as he attended the game with his 13-year-old daughter, Gianna Maria "Gigi" Bryant.

"He's got one of the greatest female players that's about to come up sitting next to him in Gigi," James added.

"It was crazy because he told me his daughter is a huge fan of mine, and I'm one of her favorite players," Young said. "It's kind of crazy because I'll be watching her highlights, too. They pop up on my timeline."

There was a time when the idea of Bryant in Staples Center in 2019, embracing Dwight Howard back wearing the purple and gold, would have been unheard of. But Howard was one of the first Lakers to greet the future Hall of Famer.

"Were there ever any hard feelings? It doesn't matter," said Howard, who has taken to wearing Bryant's signature Nike sneakers this season because he likes how they feel. "That's the past. This is a new age, a new day. We're all about positive vibes."

Even though it ended up being a warm encounter, Howard was surprised by Bryant's presence at first.

"I didn't even know who he was. Slapped me on the back of the neck. I was about to elbow him. But then he said, 'Hey, what's up? You're playing good,'" Howard said, changing his voice to a deep baritone to imitate Bryant. "I said, 'OK.' But it was cool. I was glad he came to the game. It was a lot of fun having him in the building."

The crowd ate it up whenever Bryant was on the video screen -- or really, when he did just about anything. When James shook hands with Bryant midway through the first quarter and then shot a 3 to put L.A. up 24-5, the fans cheered.

When highlights from Bryant's 81-point game were shown, immediately followed by Bryant being introduced by Lakers P.A. announcer Lawrence Tanter, they cheered.

When Bryant stood up to snap photos of Gigi with comedian Kevin Hart and Quavo and Offset from the hip-hop group Migos, they took photos of Bryant taking photos and cheered.

When James hit a 3-pointer to beat the shot clock in the fourth quarter and immediately turned to shoot Bryant a look as he ran back on defense, they cheered even more loudly.

Kyle Kuzma, who considers Bryant a mentor, doesn't normally interact with the big names in the building but made an exception Sunday.

"Don't really talk to people on the sidelines. I try to be focused," Kuzma said. "But that's my guy. So I had to."

Last season, Bryant came to L.A.'s fifth game of the year -- a 121-114 win over the Denver Nuggets -- but the win brought the Lakers' record to 2-3 with Bryant in attendance. Sunday's win pushed L.A.'s overall record to 11-2 this season, giving the Lakers the best mark in the league. The biggest change has been the addition of Anthony Davis, who had 14 points on 5-for-14 shooting against the Hawks and added five assists and five blocks.

"I mean, it's great," Davis said. "I never thought I'd be playing here in such an iconic franchise and have the opportunity to do something great here. Obviously, it's going to be nothing compared to what Kobe's done here, but just trying to write my own story and take it game by game, year by year and just keep building."

Bryant witnessed a historic night from James, whose plus-minus of plus-41 in 18 minutes in the first half was the best plus-minus in any half of his 17-year career, according to research by ESPN Stats & Info.

"Just having him in the building and knowing what he meant to this franchise and L.A. for me and my teammates, what it means to be a part of this Laker Nation and Laker family, it's a beautiful thing," James said. "And for me, I grew up watching, admiring. I was one of the kids, obviously, who had a chance to come out straight out of high school, so he did it, and I was just watching him.

"It's just dope. It's just so surreal for me, just a kid from Akron, to be able to have a guy like Kobe just take time out of his day. Even at this point in my career, it's still special." 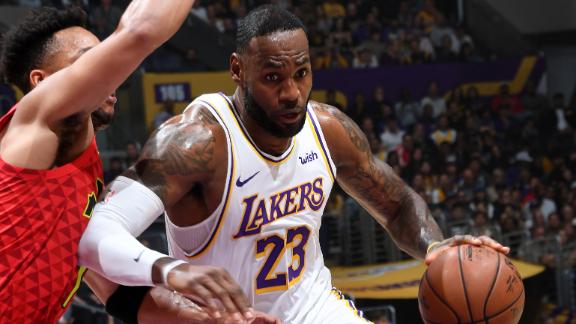 LeBron puts up double-double with Kobe in the house
With Kobe Bryant in attendance courtside, LeBron James scores 33 points and dishes out 12 assists as the Lakers dominate the Hawks 122-101. 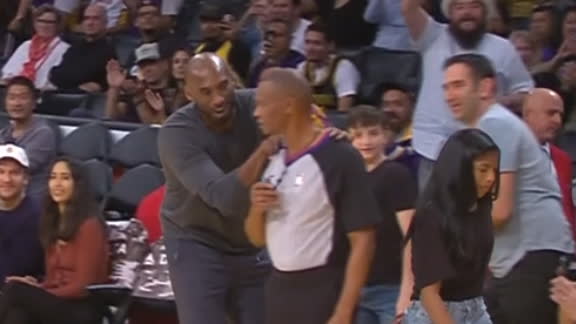 Lakers fans show Kobe love as he leaves Staples
Kobe Bryant receives chants and an ovation from Lakers fans as he exits Staples Center near the end of the fourth quarter. 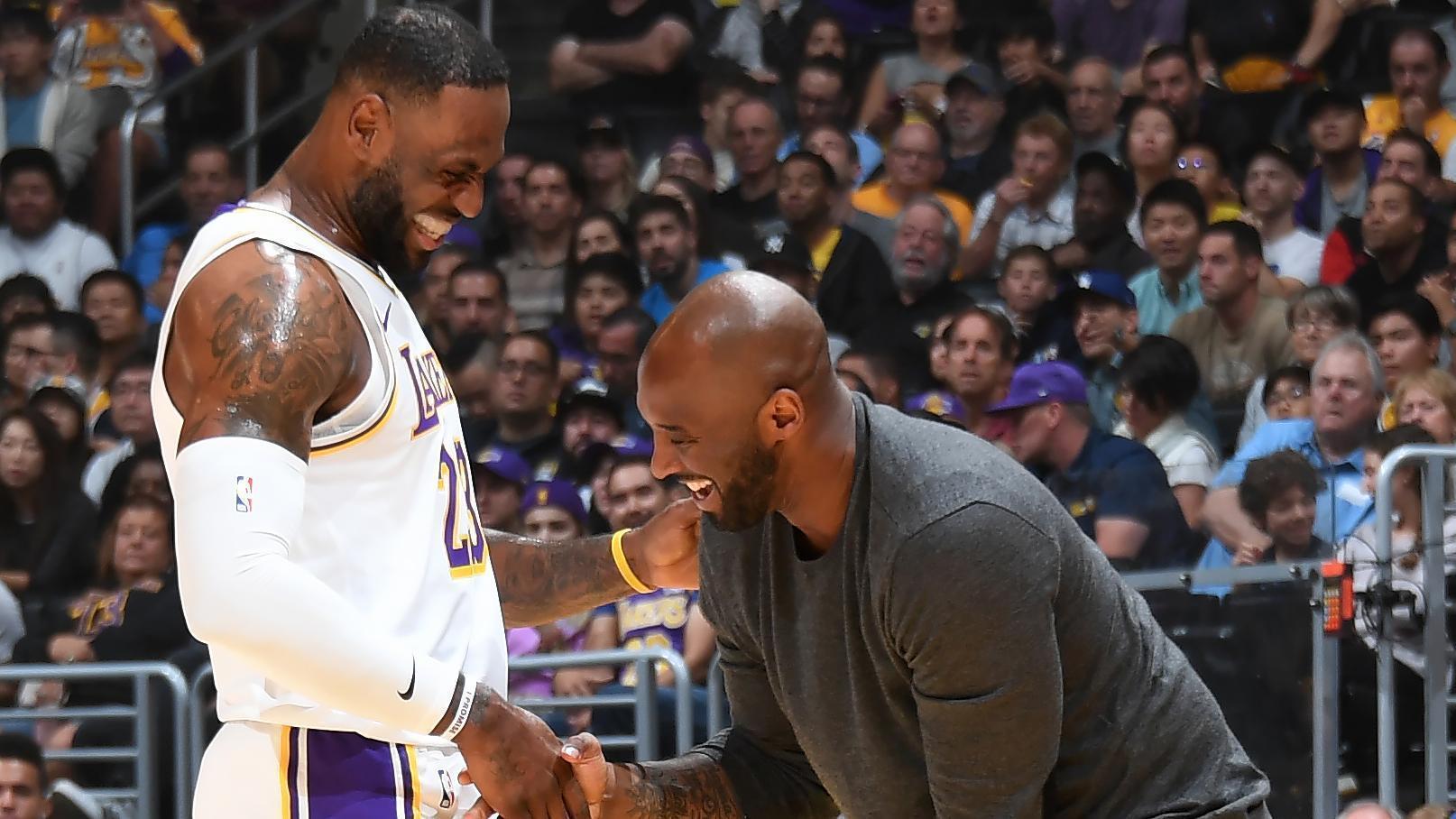