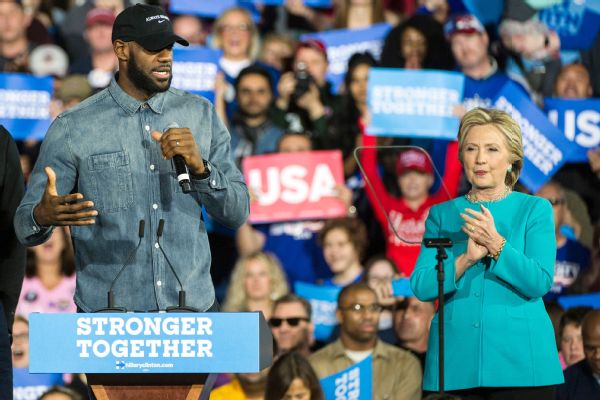 On Sunday, LeBron James was campaigning for presidential hopeful Hillary Clinton in his native Ohio. On Wednesday, he was looking for answers after her loss to Donald Trump.

He posted a message on his Instagram account saying in part: "If we continue the faith (as hard as it may be to do so) we will BE ALRIGHT!!" He posted a link toKendrick Lamar's song titled "Alright."

James went on to say:

"Parents and leaders of our children please let them know they can still change the world for the better! Don't lose a bit of faith! They're our future and we must remain stronger than ever!! Yes we all wanna lace up the boots, put on the hard hats and strike but that's not the answer. Love, genuine LOVE and FAITH will be the only thing that can get us through this.

"Minorities and Women in all please know that this isn't the end, it's just a very challenging obstacle that we will overcome!! The man above will never put something in our paths that we can handle no matter how difficult it may feel/be! To all the youth out there I PROMISE I'll continue to lead u guys every single day without no hesitation!! Time to educate and even more mold my children into being the greatest model citizens they can become in life! They will continue the legacy beyond life! Lastly, Even if whos now in office doesn't, Know that I LOVE YOU'LL!!!"

James' teammateJ.R. Smithshared a photo on Instagram of his daughter in front of the White House. In the posting, he said he wondered about the message she would take from the election.

Elsewhere in the NBA, players and coaches also shared their opinions on Tuesday's presidential election.