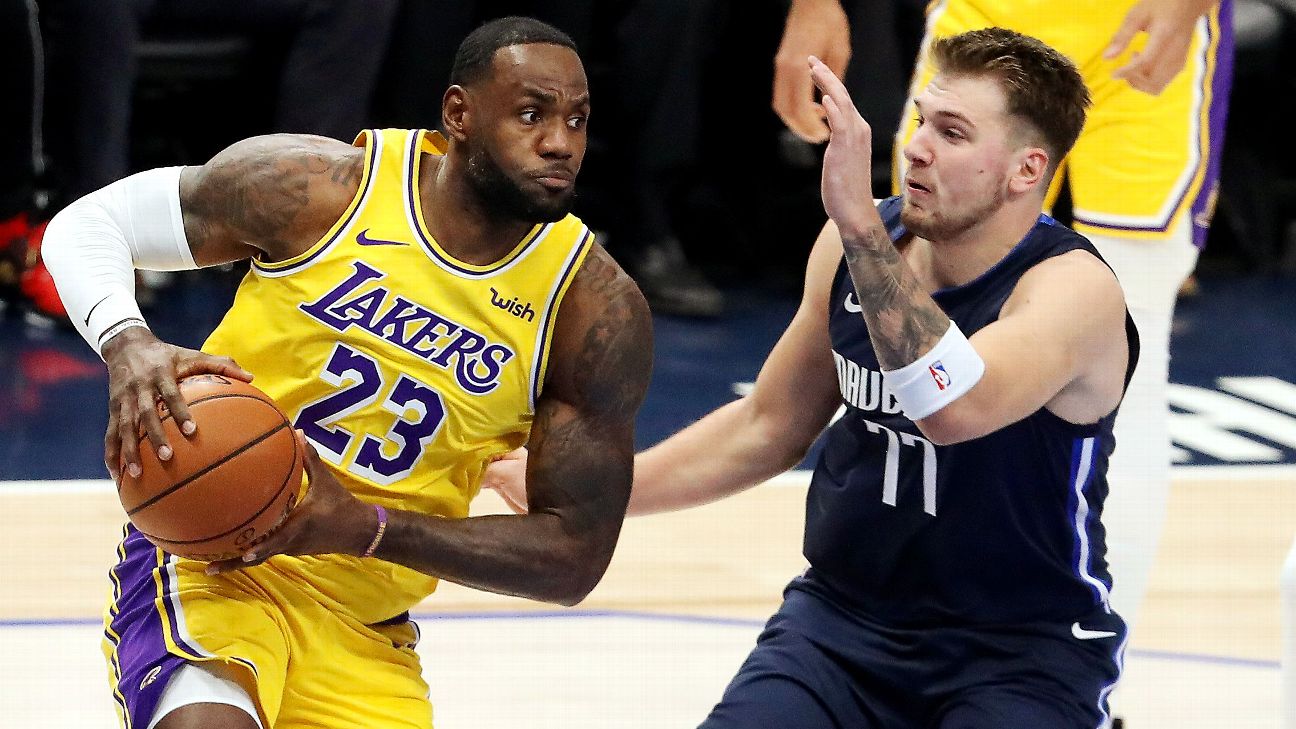 DALLAS -- When Luka Doncic played against LeBron James for the first time as an NBA rookie last season, he asked for the Lakers star's jersey after the game. On Friday, in far less ceremonial fashion, James came into Doncic's building and took a win away from the Mavericks' rising phenom.

James outdueled Doncic with 39 points, 12 rebounds and 16 assists to Doncic's 31 points, 13 rebounds and 15 assists in a thrilling 119-110 overtime win for the Lakers as Los Angeles surged back from a 10-point fourth-quarter deficit.

Doncic, 20, and James, 34, became the youngest and oldest players in NBA history, respectively, to record a 30-10-15 game, and James became the first player to have his stat line combined with four steals (since steals became an official stat in 1973-74).

"I don't really get into the one-on-one battle," James said. "Obviously he's a great young talent, I love his game, his ability to not only create shots for himself, but you guys know I love the fact that he can get great looks for his teammates. That's what I thrive on, that's what I've always believed in, and he just plays the game the right way."

Not only did James get the team victory, but in the handful of instances when he found Doncic guarding him on a switch, he won that too. James shot 5-for-7 from the field (4-for-4 from 3) for 15 points with Doncic positioned as his primary defender in the half court, according to ESPN Stats & Information. Doncic, conversely, was 1-for-1 (a 3-pointer) with James guarding him.

Kyle Kuzma, who made his season debut, said the Lakers were hunting that matchup on offense.

"What we were trying to do was get Luka in the most pick-and-rolls possible," Kuzma said. "Try to find him out there, so that's kind of what we did. We capitalized on it."

Still, James showed his affinity for Doncic after the game with a line right out of a Quentin Tarantino screenplay, telling the Slovenian second-year wing that he is a "bad m-----f-----."

"That was just some crazy stuff for me," Doncic said of the compliment. "I've been following him. He was my idol from the beginning. I can play against him and play a game like that, and the words that he said after the game were something that were very special for me.

"They're a championship team. We had a chance to win. We did some great things out there, and we should be proud of ourselves."

The Mavs led by three with 6.4 seconds left in the fourth quarter when Los Angeles ran a sideline out-of-bounds play that ended with James finding Danny Green on the wing for a tying 3-pointer as time expired, forcing the extra session.

"When I seen Danny get a clean look, I just tried to put it on time, on target," James said. "It was a little low, but he actually likes the ball sometimes a little lower; it gets his legs into it. And he was able to knock it down."

Green, whose sharpshooting helped hand James and the Miami Heat an NBA Finals loss in 2014, was a willing recipient.

"I don't think it was that tough," Green said. "My teammates set a good screen, and Coach drew up a great play. Teammates set a great screen, and LeBron made an amazing pass, read. Found me in the corner. I decided to catch, take my time, and I had a pretty good look."

The screen that freed him up was set by Dwight Howard, who appeared to hold Seth Curry on the play.

"What was my role in the final play of regulation? I don't know. I guess ... screen," Howard said. "Our team came over and said I got away with a little hold. But whatever it takes to win, we got to do."

On Saturday, the NBA Last Two Minute Report acknowledged that the call was missed and that Howard should have been whistled for an offensive foul.

But for a Lakers franchise that has been floundering for the past half-decade, this offseason was about doing whatever it took to get back to the playoffs for the first time since 2013.

Beating a Mavericks team to run their record to 4-1 out of the gates was a step in the right direction.

"You know this is a good team, we're on the road, you know we're going to be hit with adversity and we did tonight," said Anthony Davis, who scored 14 of his 31 points in the fourth quarter and overtime. "And we stayed poised, calm and collected, and we were able to come get the win."

Lakers coach Frank Vogel said Dallas has a "real chance" to be a playoff team, which means this might not be the last the basketball world sees of James and Doncic with the intensity ratcheted up.

"You never know who you can inspire along your path, and you hope that you can inspire the next generation," James said of Doncic to ESPN's Doris Burke. "And for me playing the game the right way, always getting my teammates involved and playing for the purity of the game, I was able to inspire a kid who wasn't even in America. And that's pretty special. And obviously we see what he's capable of doing. His ability to make plays not only for himself, but for his teammates, to rebound and just play for the pure love of the game, it's a beautiful thing to watch."

Doncic, with a loss to his idol, was reminded of how much more he would like to grow his game. 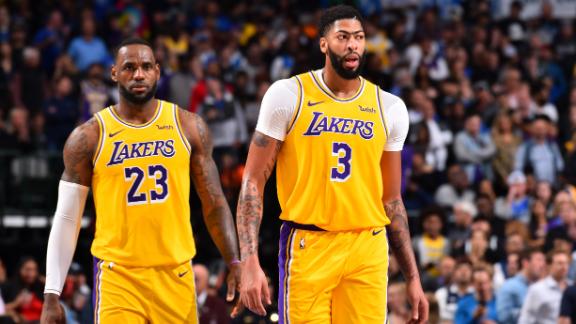