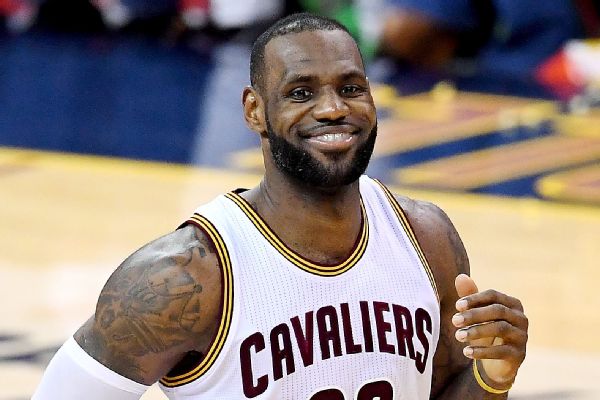 PHILADELPHIA -- A third championship in June cementedLeBron James' place as a top-10 player in NBA history in many people's subjective rankings. There is no disputing his place as a top-10 scorer, at the very least, after Saturday.

James passed Hall of Famer Hakeem Olajuwon for 10th on the all-time scoring list in the first quarter of the Cavaliers' 102-101 win over the 76ers on Saturday night.

He scored on a fast-break layup with 6:02 remaining in the first quarter against Philadelphia, putting the Cavs up 14-7 and overtaking by one point Olajuwon's career total of 26,946 points in the process. James finished with 25 points on the night.

"For me, scoring has never been on my list of goals," James said after the game. "Facilitating, getting my guys involved, and rebounding, defending, getting blocked shots and things of that nature always ranked above that, and for me to be in the top 10 with so many great players that's played this game -- I don't know how many, I don't even know the list of how many guys have played in this league since the inaugural year -- but ... it's just a blessing. It's an honor."

James is one of only three players in the top 10, along with Kobe Bryant and Michael Jordan, whose primary position was a wing player throughout his career. The rest, like Olajuwon, are centers or power forwards.

Cavs coach Tyronn Lue played alongside two of the top 10 while with theLakers-- Bryant (third on the all-time list with 33,643 points) and Shaquille O'Neal (seventh with 28,596) -- and was asked to compare James to the pair.

"I don't think he gets the credit for scoring the basketball," Lue said before Saturday's game. "I think just because he has a great all-around game as far as rebounding, passing the basketball, defensively [and] blocking shots. He's a great all-around player, so we sometimes forget how great of a scorer he is. And he's right up there with those guys. They had a different mentality as far as Kobe wants to score, kill you every single night. But LeBron will beat you in every facet of the game."

Philadelphia also happened to be the place where James scored his 25,000th point toward the beginning of the 2015-16 season.

"They talk about his passing ability, his unselfishness, the way he rebounds the basketball and pushes the basketball, but he's a scorer also and people leave that out," Lue said. "He's averaging 25 points a game the last, what, 12 years? C'mon. That's a scorer to me. But because his all-around game is so great, you kind of miss out on his scoring. To pass Hakeem Olajuwon, as a kid growing up watching Hakeem and to say that I can pass him on a top-10 scoring list, he deserves it because he's putting the work in."

Elvin Hayes is next on the all-time list with 27,313 points.