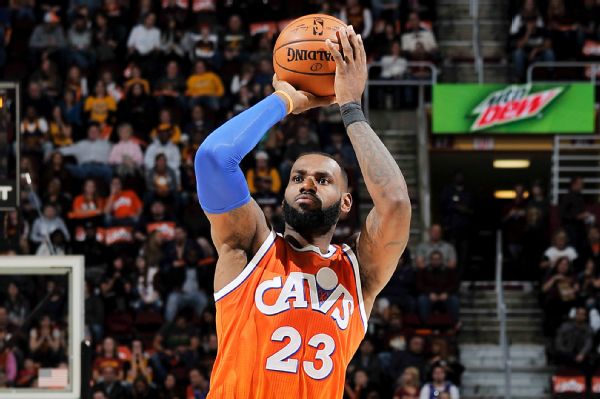 CLEVELAND -- LeBron James moved up the basketball ranks again Friday, passing Elvin Hayes for ninth on the all-time scoring list, but it was the play of Kevin Love and Kyrie Irving that he had something to say about.

"They've been playing probably the best basketball of their careers thus far," James said after the Cleveland Cavaliers' 114-84 win over the Miami Heat.

Love posted 28 points and 15 rebounds against the Heat, upping his season averages to 21.7 points on 45.6 percent shooting (41.9 percent from 3) and 10.5 rebounds. All of those numbers are up from his previous two seasons with Cleveland.

"He's the Kevin Love of old, and this is everything we expected out of him," James said. "That's what we want out of him. But there's no added pressure for him. He's going out and just playing his game right now. He's shooting the ball extremely well. He's rebounding at a high clip, and he's at a point where he's just comfortable with everything, and it's great to have him."

In his last season with the Minnesota Timberwolves, Love averaged 26.1 points on 45.7 percent shooting (37.6 percent from 3) and 12.5 rebounds, but that Wolves team finished just 40-42. The Cavs are 16-5 after Friday's win, giving them the third-best record in the NBA.

"I think just the difference is that we're winning," Love said when told of James' compliment. "I think I've played a very high level of basketball before. I don't know if better than right now, but I know I've played at a very, very high level -- even at points through the last two years. It's not like I forgot how to play. I just think I just feel comfortable with this team. (Coach) Ty Lue has me in a lot of great spots, and I'm just playing with a lot of confidence. But the difference is, back 4-5 years ago, we weren't finishing out games, making it to the playoffs, that sort of thing. So I think the fact that we're winning games, and Ky is playing at such a high level, Bron is playing at such a high level, that it's making everybody -- all 15 of these guys and the coaching staff -- look good."

Irving had 23 points and three assists against the Heat, slightly lower than his season averages of 24.6 points and 4.8 assists coming into the night. His scoring average and efficiency (48.7 percent from the floor and 42.4 percent from 3) are career highs.

"I mean, it kind of goes without saying," Irving said. "Coming off a year like we had last year ... it was a load for our confidence. Coming into this season, we knew what to expect. The trust factor is there. There are really no more questions in terms of what level we have to play at in order to be great every single night. We don't have the kind of the miscues and the unknowns. The questions are answered, and we're just straight up with one another, earnest all the time, and if there's a problem we fix it right away. It's a tell-tale sign of a maturing, great basketball team."

A tell-tale sign of James' individual greatness was the fast-break layup he scored with 6:57 remaining in the fourth quarter, giving him 27 points for the game and 27,315 for his career to move past Hayes.

Among the scorers in the top 10 list, Hayes is perhaps the least heralded, despite being a 12-time All-Star over 16 seasons that included a championship in Washington. While others such as James, Kareem Abdul-Jabbar, Michael Jordan and Kobe Bryant are known to basketball fans by a first-name basis, Hayes has faded into relative obscurity since retiring in 1984.

James, now 95 points away from passing Moses Malone for No. 8 on the all-time scoring list, said he is honored by the company he's keeping.

"I read up on him," James said of Hayes. "I know the history of the game. Obviously, I haven't gotten an opportunity to see him much. But I know how dominant he was in his era when he played the game. So anytime I'm mentioned with any of the greats, and he's one of them, it's very surreal and very humbling."