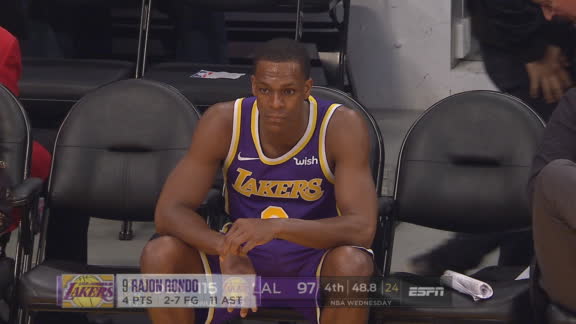 ESPN
LOS ANGELES -- Will Barton scored 23 points, Gary Harris added 19 and the Denver Nuggets snapped their three-game losing streak with a 115-99 victory over the Los Angeles Lakers on Wednesday night despite LeBron James' move into fourth place on the NBA's career scoring list.

James scored 31 points and surpassed Michael Jordan's 32,292 career points on a driving layup during the second quarter. His Lakers erased most an early 23-point deficit before fading in the fourth quarter of their fourth consecutive loss.

Denver (43-21) blew all but two points of its huge early lead, but Harris and Nikola Jokic contributed key baskets down the stretch of the Nuggets' first win of March.

Jamal Murray scored 19 points and Jokic had 12 points, 17 rebounds and eight assists for the Nuggets, who had lost four straight to the Lakers on the road despite their growth into an elite NBA team during that time period.

After James barreled to the basket and hit a layup while being fouled for his milestone points, the Staples Center crowd gave a rousing ovation to the superstar who joined the Lakers last summer after 15 NBA seasons spent with Cleveland and Miami.

The Nuggets' sophisticated offense ran wild early against a patchwork Lakers lineup, taking a huge lead in the first half despite James' big basket.

Ingram missed his second straight game with a shoulder injury, and Kuzma joined him after spraining his ankle Monday. The Lakers already were without Ball, who has been out with a sprained ankle and a bone bruise for six weeks.

Josh Hart scored seven points on his 24th birthday while starting in Kuzma's spot. He contributed to a surprising fourth-quarter lineup including rookie Moe Wagner, who scored 11 points, and Johnathan Williams, who hadn't played for the Lakers since late December.

Seldom-used backup point guard Alex Caruso had 15 points and six rebounds in an outstanding performance in just his eighth NBA game of the season.

Nuggets: Trey Lyles missed his seventh straight game with a strained left hamstring. ... Paul Millsap had 16 points and eight rebounds, along with a technical foul for arguing.

Lakers: They went 12 for 23 on free throws, including a 1-for-8 start with four straight misses by James. They also missed three free throws after technical fouls. The Lakers are the NBA's worst free throw shooting team. ... Lance Stephenson returned and scored three points after missing three games with a sprained toe. ... Tyson Chandler also missed his second straight game with a stiff neck.

Mark Jackson rips into Rondo for sitting away from teammates
Rajon Rondo sits far away from his teammates after another Lakers' loss, and Mark Jackson is not having it.
Report a correction or typo
Related topics:
sportsespndenver nuggetsnbalos angeles lakers
Copyright © 2020 ESPN Internet Ventures. All rights reserved.
More Videos
From CNN Newsource affiliates
TOP STORIES