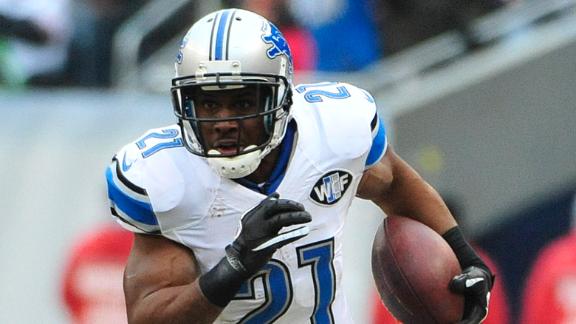 Reggie Bush is no longer a member of the Detroit Lions.

The Lions announced the release of the 29-year-old running back Wednesday afternoon, less than two weeks before the start of free agency. The move was initially reported by ESPN Insider Adam Schefter.

Bush signed a four-year deal with the Lions in 2013 and was a 1,000-yard rusher for Detroit in his first season with the club. Bush couldn't stay healthy in 2014, though, dealing with a lingering ankle injury that started in Week 5 against Buffalo and never completely healed.

He played in 11 games last season with only 76 carries for 297 yards and two touchdowns. He also had 40 receptions for 253 yards. Bush continually tried to come back throughout the season but kept getting reinjured.

Lions general manager Martin Mayhew said Bush played hurt during the team's playoff game against Dallas, when he had eight carries for 37 yards and a touchdown along with three catches for 10 yards.

"He's a warrior," Mayhew said. "That Dallas game, he was hurt. But he went out and played his butt off in that Dallas game, the playoff game. I thought he gave everything he had, and I have great respect for guys who are able to do that.

"Some guys get nicked up and they can't play. That's just the reality. I know that about some players, that this guy's not quite right and we're probably not going to see him this weekend. We probably know that on Monday or Tuesday. Well, Reggie fought through some things throughout the entire season and was able to get on the field and compete, and that means a lot to me and I think the locker room respects him."

The move saves the Lions $1.7 million in cap room for 2015, which is sorely needed if the team is going to try to keep defensive tackle Ndamukong Suh, long the franchise's top priority in free agency.

Mayhew said Bush's future was in question last week at the NFL combine, essentially saying it was up in the air. Now, moving on from him is final.

"It's not about Reggie Bush. It's about the process of evaluating where you are as a football team," Mayhew said. "We have a bunch of meetings after the season. The coaching staff meets. The scouting department meets together and we evaluate everybody's performance.

"Part of that, from my standpoint as GM and in terms of setting up our team, is how much of a contribution each guy made to the football team that year. In Reggie's situation, obviously last year he was injured so you have to look at the contribution versus how much you're paying a player. It's not just Reggie. It's every player on the team."