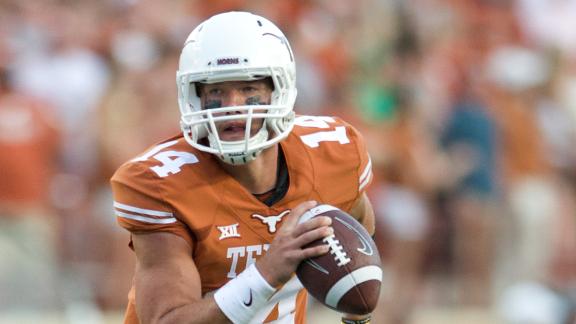 AUSTIN, Texas -- Texas Longhorns quarterback David Ash has elected to end his football career after struggling with concussion-related symptoms for the past year.

Coach Charlie Strong announced the junior quarterback's decision after practice Wednesday. Ash had started 22 games in his career with the Longhorns but was shut down on Sept. 1 after experiencing more symptoms.

"We just decided, because of his health -- that's the No. 1 concern for all of us -- that he's no longer going to play football," Strong said. "But he is going to be part of the team, because I told him I wanted him around the team, and that's what he deserves."

Ash suffered a concussion at BYU in September 2013 and played in just two games since then. He met with Strong on Wednesday and agreed it was in his best long-term interest to stop playing.

"The trainers and doctors had been working with him and, like I said, his health is our major concern," Strong said. "We sat down to talk and he said, 'Coach, this is what I'd like to do.'"

Strong said there was "no way" Texas coaches and trainers could allow Ash to continue playing considering his concussion history. But it was Ash's decision to officially end his playing career.

"It was a very tough call for him," Strong said. "He's very emotional. He's done a lot for this program, been a major part of this university."

Ash finished his career with 4,728 passing yards and 36 total touchdowns.

Sophomore Tyrone Swoopes has started Texas' past two games and will remain the starting quarterback. Strong said Ash will continue to work with Texas' quarterbacks this season.

Strong also announced Wednesday that starting defensive tackle Desmond Jackson will have season-ending surgery after suffering a Lisfranc injury. Jackson, a senior, would be eligible for a medical redshirt.

"All I can do is smile and keep my head up," Jackson posted on his Twitter account. "Get my degree in the spring and bring one more year to the 40 acres."