Lonzo Ball one assist shy of triple-double in Lakers' win vs. Suns 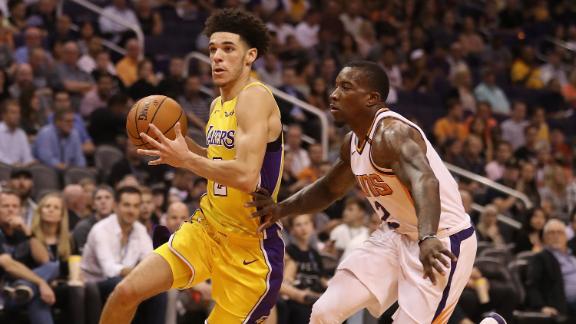 PHOENIX -- Luke Walton came to Lonzo Ball's defense saying that his rookie point guard did not play as poorly as some might've believed in the Los Angeles Lakers' opener.

In his second game, Ball backed his coach's words up by falling one assist shy of becoming the youngest player in NBA history to post a triple-double with 29 points, 11 rebounds and 9 assists to help the Lakers outlast the Phoenix Suns132-130 at the Talking Stick Resort Arena.

"I think Lonzo's getting a bad [rap] for getting destroyed his first game," Walton said before the game. "Personally, I thought he could have had a double-double with rebounds and assists [but] we didn't make any shots. ... I thought he was fine last night. It's a good learning experience for everybody."

On Friday night, Ball bounced back by flashing the kind of triple-double versatility that made the Lakers select him second overall in the draft. He displayed the kind of passing that dazzled at the Las Vegas Summer League and knocked down four 3's, including a step-back 3-pointer.

When the Suns made a late charge and got within three with 3 minutes, 19 seconds left, Ball scored six of the next eight points for the Lakers in a minute and a half, making three shots with his left hand. He scored on a driving left-handed scoop shot in traffic, another left-handed drive and score over Tyson Chandler and then a driving left-handed layup. In between those baskets, he pushed the ball up court to Kyle Kuzma, who drove in for a layup.

Ball is the first teenager since LeBron James to have 29 points, 11 rebounds and 9 assists. His 29 points are the most by a Laker in his first or second game of his career since at least 1963. Magic Johnson scored 26 in his debut.

"This happened before," Ball said of him getting off to slow starts and people labeling him after a poor game. "It happened in summer league. It's happened before in my career. So, I am used to it.

"I know everybody is going to say everything game by game, so if I play bad on Sunday, it is going to go right back to he's a bust. It doesn't matter to me, I just come out and play as hard as I can to get my team wins."

On Thursday night in the season opener, Ball missed five of six shots and finished with 3 points, 9 rebounds and 4 assists in a 108-92 loss to the Clippers. Patrick Beverley hounded the rookie, at one point giving him a body check and sending Ball to the floor at half court.

Ball looked a lot more comfortable, confident and assertive against the defenseless Suns. After making one 3-pointer in the second half, the normally reserved Ball swayed his head back and forth to show how confident he was feeling. Phoenix, which surrendered 124 points in a 48-point loss in its opener to Portland, offered little resistance to the Lakers.

"Just be more aggressive," Ball said of what changed from the opener to his second game. "The last game I shot six shots, that didn't work out too well. Maybe I will try something else."

Ball and Brandon Ingram, last year's second overall pick, flourished in the up-and-down. free-flowing tempo of the game. Ball fired full-court passes like he did when leading the Lakers to a summer league title and earning MVP honors in Las Vegas. It was there when Ball created a stir with a slow start when he shot just 2-of-15 and had five points in his summer league debut. He followed that game up with the first of two triple-doubles -- the first two in Las Vegas summer league history.

That led Johnson, the Lakers' president, to say that the rookie will have more triple-doubles to come in the regular season. Ball was an Ingram missed 3-pointer with 1:09 left from topping James as the youngest NBA player to ever record a triple-double. James holds the distinction after doing it at 20 years, 20 days old. Ball is still 19.

On one play against the Suns, Ball grabbed a defensive rebound under the basket, turned and fired a full-court, rim-to-rim pass right to a streaking Corey Brewer right in front of the other basket. Brewer attempted a dunk but was blocked.

Ingram also bounced back in a big way. After going 3-for-15 and scoring 12 points against the Clippers, Ingram had the best night of his young career. He scored a career-high 25 points, topping his previous best of 22 points in the third quarter. Ingram knocked down 9 of 14 shots and three triples.

After Ball struggled in his opener, Beverley talked about how he had to welcome the rookie to the league by going at him like many other vets will. Beverley also shouted expletives as he walked into the locker room after the game, presumed to be about Ball and how he would get the best of the rookie.

LaVar Ball fired back at Beverley by saying, "Your check still ain't going to go no higher than what it is. Yeah, you shut him down. OK. ... Who is Patrick Beverley?"

"He's always going to have a bad rap, you know why?" said LaVar, who chatted after Friday's game with R&B singer Montell Jordan, the halftime performer at the game. "Because I am talking so bad about him. Because Lonzo is so good you can't touch him. But everybody want to quiet me up. While you are worried about me, I am sitting up in the stands while my son is whooping that tail.

"When you start matching him up with all these guards and what guard he is playing next, everybody wants to see what guard is going to get the best of him. ... Tell Patrick Beverley that was his last interview for the year so don't worry about it."

Lonzo bounces back in second game
After a poor performance in his debut, Lonzo Ball takes control in the Lakers' win over the Suns scoring 29 points, collecting 11 rebounds and dishing out nine assists. 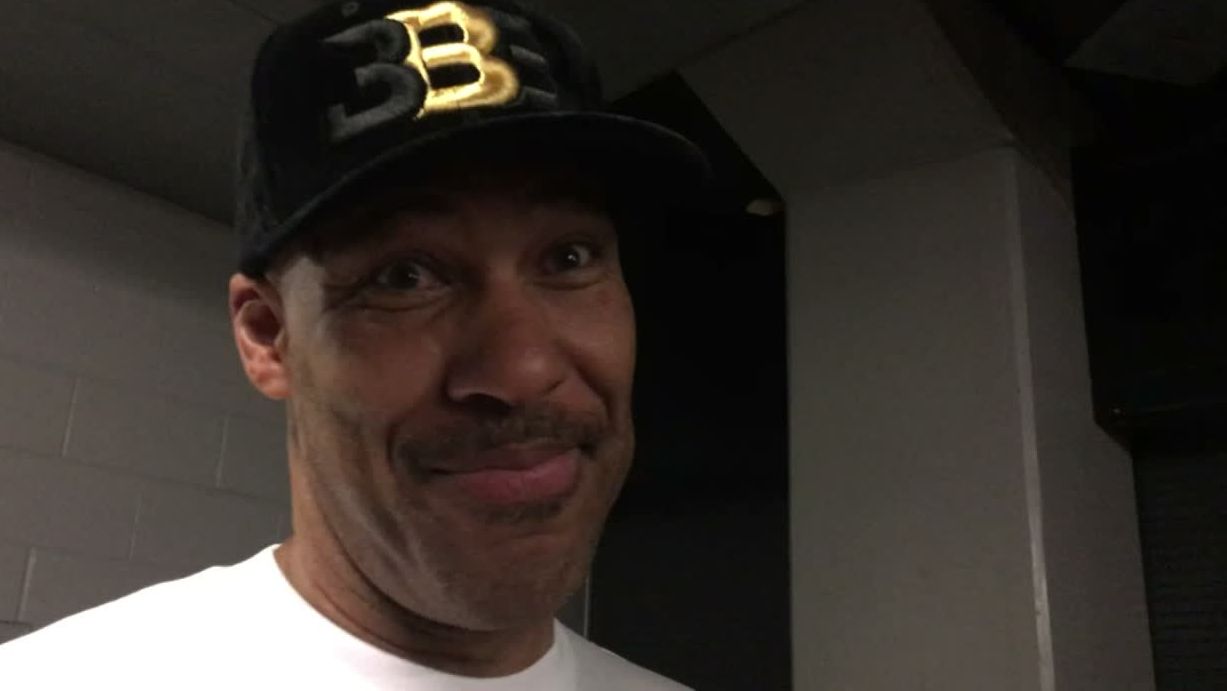