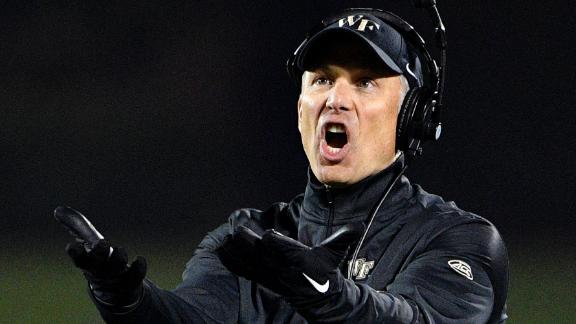 On Wednesday,Jurichsaid in a statement that Wake Forest radio announcer Tommy Elrod called Galloway during the week of the Nov. 12 game between the schools, and that information about Demon Deacons plays was shared.

"This is an unusual situation. When someone receives information they should not be given, it is important that they do the right thing. Even in a competitive atmosphere, the right and ethical thing would have been for us to not accept the information. I regret very much that this took place."

Wake Forest had concluded that Elrod, a former Demon Deacons player and assistant coach, provided or attempted to provide confidential game preparations to opponents several times beginning in 2014. He has since been fired.

Louisville and Virginia Tech have acknowledged receiving information from Elrod. Army also has been contacted as part of Wake Forest's internal investigation, and the military academy said Saturday that it will conduct its own investigation into the allegations.

Indiana released a statement Friday afternoon saying that the school conducted its own review, which did not uncover any evidence that the Hoosiers had obtained confidential or inside information from Wake Forest personnel before their games against the program in 2015 and 2016.

Galloway, Louisville's first-year coordinator, has known Elrod since 2007, and the two worked together on the Wake Forest staff in 2011 and '12.

Wake Forest's investigation was launched after a sheet featuring its plays was discovered during a Nov. 11 walk-through at Papa John's Cardinal Stadium, one day before the Demon Deacons played Louisville there.

"Lonnie received a call from Elrod during the week of the Wake Forest game, and some information was shared with him that week," Jurich said in Wednesday's statement. "Among the communication were a few plays that were sent and then shared with our defensive staff. None of the special plays were run during the course of the game. Our defense regularly prepares for similar formations every week in their normal game plan.

"Any other information that may have been discussed was nothing that our staff had not already seen while studying Wake Forest in their preparations for the game and the material was not given any further attention."

Wake Forest coach Dave Clawson said Friday morning on ESPN's Mike & Mike that his team had to adjust its game plan for the Cardinals after discovering the aforementioned sheets. He said that players were upset because they felt they had wasted their effort practicing opponent-specific sets that were discarded once Wake Forest realized the plan had been compromised.

Louisville suspends OC over WakeyLeaks
ESPN ACC reporter Andrea Adelson explains why Louisville had to suspend offensive coordinator Lonnie Galloway for the Citrus Bowl after he admitted to getting plays in the Wake Forest play-sharing scandal.