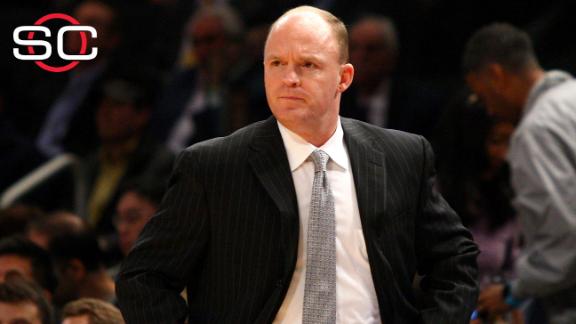 "Scott brings a great skill set to our organization ... I can go on and on [about] his ability to teach, to inspire is something Scott excels at and is what our team needs at this point," Hennigan said during Friday's introductory news conference. "We found our guy. We found the right guy, and we're enthusiastic about it. And we'll leave it at that.

Hennigan declined to say whether the Magic had interest in discussing the job with former Chicago Bulls coach Tom Thibodeau, who was fired Thursday after five winning seasons.

The Magic were undaunted by Skiles' interview earlier this week with the New Orleans Pelicansand ultimately succeeded in securing a deal with the former Phoenix Suns, Chicago Bulls and Milwaukee Bucks coach, who famously once had an NBA-record 30-assist game while playing in Orlando's backcourt.

Skiles was a member of the Magic's inaugural team in 1989-90 and played five seasons in Orlando as part of his 10-year playing career.

But Skiles, 51, said it was important that the Magic's primary interest revolved around his ability as a coach and not solely because of his ties with the franchise from two decades ago.

Skiles' candidacy has always had the strong backing of Magic ownership and team CEO Alex Martins from the moment Jacque Vaughn was dismissed in February.

"They made it clear to me that this was Rob's call," Skiles said of the hiring process. "I'm here because I was a basketball coach and not just because I played for the Magic. That was important to me."

Martins used the terms "focus," "structure" and "accountability" when discussing the characteristics Skiles brings to the job. The expectation is that he can return the Magic back to playoff contention in the Eastern Conference. Orlando had three straight seasons of 25 or fewer wins under Vaughn, a first-time coach.

"As we began our search, our internal discussions centered on finding a head coach with a solid rsum of NBA head coaching experience, great leadership qualities, a motivating communication style, and someone with a strong strategic acumen," Martins said in a statement. "We feel Scott [Skiles] brings a balanced approach in all those qualities and we look forward, with great confidence, to him leading our young men in helping us reach our collective goal of sustainable success."

Though Skiles has only the lone 50-win season as a coach, he did help the Bulls improve from 23 wins in 2003-04 to 47 victories in his first full season in Chicago. He went on to guide the Bulls to three consecutive playoff appearances, ending their six-year postseason drought.

Skiles also has a reputation of being a no-nonsense presence in the locker room, an extension of his playing days when he was known as an intense competitor. He inherits a young roster in Orlando, headlined by big man Nik Vucevic and guards Victor Oladipo and Elfrid Payton. That list also includes forward Tobias Harris, who previously played under Skiles in Milwaukee as a rookie and for part of his second season in the league.

Skiles denied speculation that he had a rift with Harris from their time together in Milwaukee and said the player's role was reduced during his rookie season with the Bucks because veterans such as Mike Dunleavy and Luc Mbah a Moute were more prepared to contribute consistently in the rotation. Harris has been a solid part of the Magic's nucleus since his arrival in Orlando but becomes a restricted free agent July 1.

Skiles said he analyzed his approach during his time away from the game and admitted there are some things he would do differently when he returns to the bench with the Magic.

"When you're an NBA coach, there are only 30 jobs," Skiles said. "They're open often, unfortunately for the coaches, but people tend to have certain guys they look at or certain styles they look at, and that eliminates certain guys. This happened to be the right place at the right time for me."

After hiring a coach and navigating the upcoming draft, deciding what to do with Harris' contract is likely the Magic's next offseason priority. Orlando, which finished 25-57 and at the bottom of the Southeast Division for the third straight season, owns the fifth overall pick in next month's draft.

"We're young and inexperienced," Skiles said. "That can't be an excuse anymore. That has to be turned into a strength."

ESPN.com's Michael Wallace and Marc Stein and the Associated Press contributed to this report.