Magic Johnson says Lonzo Ball 'has greatness written all over him' 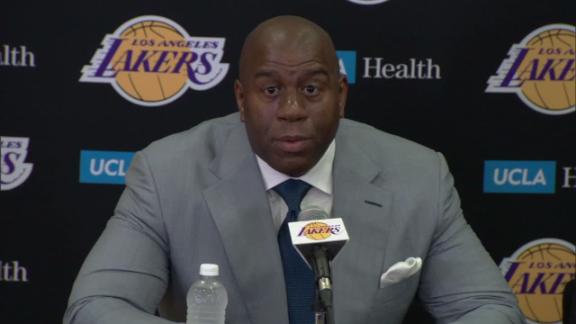 EL SEGUNDO, Calif. -- The Los Angeles Lakers wasted no time heaping sky-high expectations upon Lonzo Ball, whom they drafted with the No. 2 overall pick in Thursday's NBA draft.

When the organization introduced Ball on Friday at the team's practice facility, Lakers president of basketball operations Earvin "Magic" Johnson called him "the new face of the Lakers, the guy who I think will lead us back to where we want to get to."

Soon after, Johnson told Ball, 19, to look at a nearby wall, where several retired jerseys of Lakers icons are displayed.

"We expect a Ball jersey hanging up there one day," Johnson told Ball.

When asked about Johnson's comment, Ball replied, "I think it's a good goal to set. I'll definitely be chasing that."

Why the high expectations on Ball?

"He has greatness written all over him," Johnson said. "Now he just has to go out and push him, and we will, too. And [Lakers coach] Luke [Walton] and the coaching staff will do the same thing and it's OK, because he receives all that well.

Johnson even referenced the 1980s Showtime Lakers -- a team he led -- when talking about the ball movement that he hopes Ball will bring to the Lakers.

"We want to start building a successful team, and you have to have a great leader," Johnson said, "and somebody that can make their teammates better, somebody who has incredible basketball IQ -- his IQ is off the charts -- and somebody who can get their teammates to follow them and want to get out on that wing like James Worthy and Byron Scott and Michael Cooper used to do back in the day. We feel like we have that person right here in Lonzo Ball."

It was pointed out that the Lakers are putting as much pressure on Ball as they have perhaps placed on any rookie.

"Well, the support here is great, so it's not just me," Ball said. "I'm playing the game of basketball, which I've been playing all of my life. It's fun to me and I know it's going to be fun here. I'm not really worried about all that."

"We feel like Lonzo is a transcendent talent, and Magic and I knew the moment we scouted his game, the type of player he was and how he was raised," Pelinka said. "I think when this really came into focus for us was, we knew the talent was transcendent. The way he passes the ball, you look at quarterbacks like Tom Brady and Aaron Rodgers, that just have a gift. It's clearly a gift, with what he's been blessed with."

Added Johnson, "Guys want to get out on that break and run hard because they know Lonzo will find them and not just give them a pass, but a scoring pass. See, some people can pass, but very few people can lead to a scoring pass. And that's what type of passer he is. He's unbelievable. He has a great feel for the game. He understands angles. That's also difficult. That's what we saw watching so much tape of him. You see yourself. You see Jason Kidd."

Ball, sporting a No. 2 Dodgers jersey, made an appearance at Dodger Stadium later Friday to throw out the first pitch before the team's game against the Colorado Rockies.

His outspoken father, LaVar, sat front and center at Friday's news conference, watching his son raise a crisp No. 2 Lakers jersey. After Thursday's draft, LaVar proclaimed, "Lonzo Ball is going to take the Lakers to the playoffs in his first year."

On Friday, LaVar was asked about his remark.

The Lakers have missed the playoffs for four straight seasons, their longest postseason drought in franchise history, and are coming off a 26-56 season, the third-worst record in the NBA. 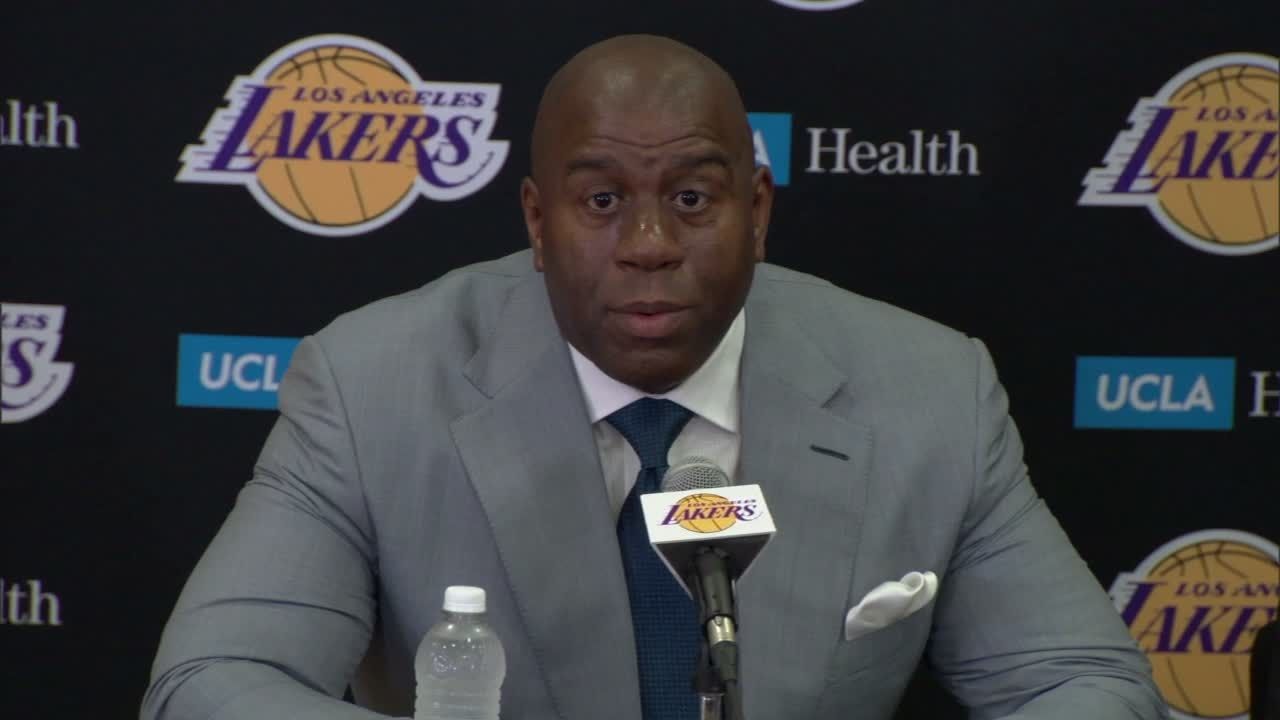