Managing Game 7 is the most difficult coaching job in sports 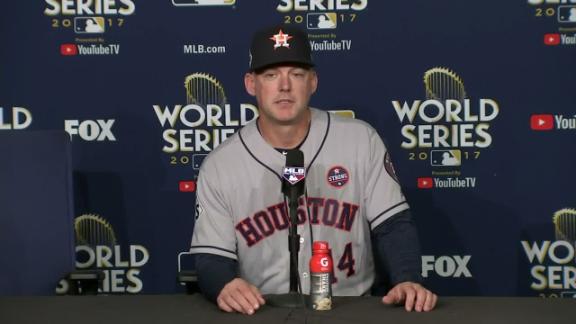 Consider this single tweet, from Buster Olney, which contains within it everything that makes this a managing challenge unlike any other:

Consider one unspoken premise in that tweet: To win, the Los Angeles Dodgers will need to get 27 outs. Well, to lose they will, too. But to win, somebody/somebodies will have to get a bunch of outs, all the way to the 27th.

Now consider three assumptions that pretty much all of us can agree on, independent of that tweet:

1. Clayton Kershaw is one of the greatest pitchers in the history of the game, and he's more or less in his prime. At full strength, he is the best bet to get any individual out, though he won't be at full strength after starting Sunday.

2. Kenley Jansen is one of the greatest relievers in the history of the game, and maybe the best in the world right now. At full strength, he is the next-best bet to get any individual out.

3. Yu Darvish is also quite good. (He is also a fully rested starter and can pitch much longer than the others.)

Now, presuming that Dave Roberts meant the words in that tweet as we're likely to read them -- that he envisions Clayton Kershaw being his "closer" during Wednesday night's game -- there are two implications:

First, that Jansen, a historically great reliever who threw only 19 pitches Tuesday (and none on the off-day Monday), will pitch before Kershaw.

Second, Roberts knows roughly how many outs he's going to ask Kershaw to get. Generally, managers don't bring in the guy they want to get the last out until they're sure they can make it to the last out. That's why closers don't come into the sixth or seventh, even when it might be the biggest moment of the game. Once the closer is in, the closer does not get removed. This is especially true if Jansen already has pitched before Kershaw.

But there's a problem in all of this: Nobody can know what number you want to give Kershaw. For one thing, outs are a constantly shifting unit of measurement; some take a single pitch to get, some take 25 or 30 and include a bunch of hits and walks along the way. More likely, there is an estimated number of pitches Kershaw can throw -- adjusted, perhaps, for how many times he has to get up and down to start new innings -- and a guess for how many outs he can get in those pitches. But if it's, say, 40 pitches, how many outs is that? No way to know. Roberts risks either overextending Kershaw, if his pitcher takes more pitches than expected, or wasting Kershaw, if his pitcher needs fewer pitches than expected.

For the other thing, though, that pitch estimate Roberts is going by is totally made up. There's no real precedent here. There's certainly no precedent established by thousands and thousands of instances of pitchers just like Kershaw coming into games just like this one under circumstances exactly like these with precisely this number of innings thrown over the past week, month and year, and with exactly the same recent back issues Kershaw has had. So maybe it's 40 pitches. Maybe it's 25 and then he hits a wall, and now he's overextended again. Or maybe it's 85, and bringing him into the eighth is, again, wasting him. (All of this, incidentally, applies also to Jansen, who you'll try to extend -- but not extend too much.)

So, ideally, in a perfect world, you'd do the only logical thing: You'd start with your best pitcher, Kershaw. You'd let him go until you realize he's not your best anymore. You figure out as you go how many pitches that is, and you figure out as you go how many outs that is good for. Then you bring in your second-best pitcher, Jansen. You do the same. Once he's not your second-best pitcher anymore -- which you'll see, because you're a baseball genius and spot these little tells that a pitcher has that he's tiring -- you look up at the scoreboard. Maybe it's the third inning at this point. Maybe it's the eighth inning. The difference between those two situations is massive, and you're glad, looking at the scoreboard, that you chose to do it this way, because now you know exactly what you need to get from your third-best pitchers and beyond.

But you can't do this, can you? Because, most likely, you're still going to be asking a lot from Yu Darvish, and he needs to be good for this plan to work. He needs to be Yu Darvish good. And you just don't know whether Darvish, coming out of the bullpen for the first time in his career, with all the nerves of Game 7 of the World Series affecting his preparation in the bullpen, is going to be able to handle that. If he can, he throws the final six or four or two innings and you hold the parade. If he doesn't, you've just ruined the third-best pitcher you've got.

(And, for that matter, if Darvish gets knocked out, you might wish you'd asked for more from Kershaw and Jansen. You might have pulled them because they looked worse, at that point, than Darvish, but not necessarily worse than the options after Darvish.)

All of this is why this is the single hardest game in sports to manage. In most sports, the coach or manager knows more or less how good his players are, and tries to put them in a position to succeed. Maybe the coach gets it wrong -- bad matchup, a bad playcall, a failure to imagine the defense's response, or just bad juju. Maybe the coach gets it right, but the players don't execute, and it all goes south. Half of all coaches lose, and they were all stupid if you listen to talk-radio after the game.

But for Game 7, baseball managers have to make these decisions without having any reasonable idea how good their players even are. Once they start to tire, pitchers' fatigue is the most powerful force in baseball. When Dave Roberts brought Brandon Morrow into Game 5, he knew Morrow would be tired from overuse, but he had to guess how tired and how much it would matter. Roberts guessed "a little." The answer was "a lot." Morrow was historically bad. Roberts wouldn't have brought Morrow in if he'd known that. He was just guessing.

Game 7 will be that, for both teams, with even higher stakes and even more unknowns. We have no idea whether Kershaw, exhausted, is still the best pitcher on the Dodgers, or how exhausted he can be and still maintain that status. We have no idea at what pitch count Jansen stops being better than Ross Stripling. It's certainly after pitch 1 and it's certainly before pitch 150, but we -- and Roberts -- have no way of saying in advance what that number is.

So Roberts will guess. An educated guess, but a guess, because not even the players really know and most of them aren't honest anyway.

Last year, Joe Maddon made these guesses in Game 7. He took out his starter, Kyle Hendricks, for Jon Lester, who was pitching on the same two days of rest that Kershaw will have Wednesday. Lester was great. Then Maddon took out Lester for Aroldis Chapman, his closer. Chapman had thrown 14 postseason innings already -- one fewer than Jansen has thrown -- and had thrown 20 pitches the night before, one more than Jansen did Tuesday. He wore down. He blew the lead and limped home throwing off-speed pitches. He wasn't very good anymore.

Last year, Roberts made similar guesses in the final game of the Dodgers' National League Division Series. He brought Jansen out for the seventh inning, unheard of for a closer. Jansen tried so hard to get to the end, but he couldn't quite do it. Kershaw, pitching on just one day of rest, came in for the final two outs. He was still amazing.

To date, that is. Whatever happens Wednesday will quite possibly top it for all three, or else ... the opposite. It's anybody's guess.