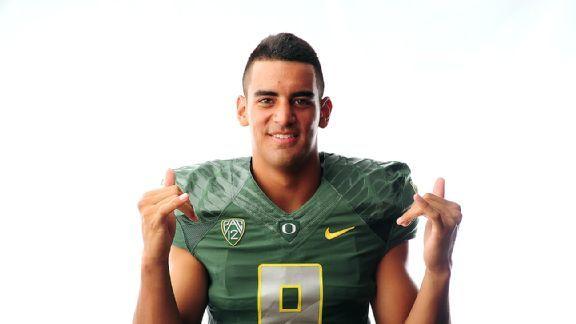 NEW YORK --Marcus Mariota wrote it all down, every word of his Heisman Trophy acceptance speech. It was a good thing, too, because getting through it might have been tougher than sprinting away from a linebacker or tossing a long touchdown pass for Oregon.

The Ducks' understated star won the Heisman on Saturday night going away, capping a three-year climb to college football's most prestigious individual award.

"I'm humbled to be standing here today,'' Mariota said moments after he was announced as the winner.

Mariota isn't a big talker, but he steadily worked through his speech, thanking his teammates, teachers, friends and his home state of Hawaii. He finally hit a snag when it came time to thank his mother and father. He needed to take two deep breaths and still got choked up.

"I had to give thanks to so many people because where I am today, it's all due to all those people," Mariota said later. "It's hard not to get emotional. It's been a long journey. My emotions got the best of me.''

A pinpoint passer with wide receiver speed, Mariota came into his junior season as the favorite to win the 80th Heisman and delivered a performance that turned the presentation ceremony at a theater in Times Square into a foregone conclusion.

Mariota received twice as many points as second-place finisher Melvin Gordon, the record-breaking running back out of Wisconsin. The other finalist, Alabama receiver Amari Cooper, was third.

Mariota received the second-highest percentage of possible points (90.92) in Heisman history, behind only Ohio State quarterback Troy Smith, who had 91.63 in 2006.Southern CaliforniatailbackReggie Bushreceived 91.77 percent of possible points in 2005, but his victory was later vacated forviolatingNCAA rules.

Mariota, the first Hawaii native to win the Heisman, has accounted for a Pac-12-record 53 touchdowns (38 passing, 14 rushing and one receiving) while directing the Ducks' warp-speed spread offense.

In the inaugural College Football Playoff, Mariota and the No. 2 Ducks will take on 2013 Heisman winner Jameis Winston and No. 3 Florida State in the Rose Bowl Game presented by Northwestern Mutual on Jan. 1, at 5 p.m. ET on ESPN. It will be the fourth meeting between players who already had won Heismans and first since Tim Tebow and Sam Bradford in the 2009 BCS Championship Game.

Winston, who quarterbacks the undefeated Seminoles, finished sixth in this year's voting. That's the lowest finish by a returning winner who didn't miss a game with injury since 1950.

Gordon is the first Heisman runner-up in Wisconsin history and is the highest finisher the school has had since Ron Dayne won the award in 1999. Cooper's finish breaks a long drought for wide receivers, as he is the position's first top-three Heisman finisher since 2003.

Mariota has been making a whirlwind tour up the East Coast collecting trophies. First stop, Orlando, Florida, on Thursday, to pick up an armful of hardware. Next stop, Baltimore for the Johnny Unitas Golden Arm Award. He took a train to New York on Saturday morning. It was his first time on a train and his first time in the Big Apple.

"It's breathtaking, really," he said of the city hours before being announced as the winner. "I've never been around so many skyscrapers and lights and people. It's definitely been a different feel, but it's cool."

Mariota is the ninth QB to win the Maxwell, Davey O'Brien and Heisman Trophy awards in same season, and first sinceCam Newtonin 2010.

"I'm just looking forward to getting back on the field and playing again," Mariota said. "We do have a team goal.''

In an era when so many Heisman winners seemingly come from out of nowhere -- the past two were the first freshmen winners -- Mariota's rise was slow and steady.

Three of the past four Heisman winners were in their first seasons as starters, including Newton, who won the award in his only season at Auburn after transferring from a junior college. Before Newton, three straight sophomores won the award (Tebow of Florida, Bradford of Oklahoma, andMark IngramofAlabama). Tebow was the first sophomore winner.

Like Texas A&M quarterbackJohnny Manzieland Winston, the previous two winners, Mariota started as a redshirt freshman. It didn't take long for him toestablish himself as a star, but unlike Johnny Football and Famous Jameis, Mariota wasn't the face of college football in his first season.

In his second season he was even better, putting up numbers that rivaled those of 2013 Heisman finalist quarterbacks Winston, Manziel, AJ McCarron and Jordan Lynch, but when it came time to vote for the Heisman, Mariota was forgotten. He didn't even finish in the top 10 in 2013.

This season Mariota would not be ignored.

This season, Mariota was the man to beat from the start, and nobody could touch him. Except for a blip in early October, when the Ducks lost to Arizona, Mariota exceeded the hype.

He leads the nation in passer rating (186.2), is fifth in total offense (342.5 yards per game) and has led the Ducks to a Pac-12 title with a chance to play for their first national championship.

Of course, patience and poise have defined Mariota's career. He didn't start for his high school team until he was a senior -- then led Saint Louis in Honolulu to a state title.

A quiet leader with a nice-guy reputation, Mariota brought no off-field baggage to this Heisman ceremony. After a season beset by off-field troubles, including a school hearing into sexual assault allegations, Winston wasn't a finalist this time around.

Mariota has another year of eligibility, but he's been in Eugene, Oregon, for four years and is on target to graduate soon. He has yet to declare for the NFL draft, but he has likely played his last home game at Autzen Stadium.

Mariota passes the NFL eye test, too. He could have been a high draft pick last year, and his stock has only gone up this season.

Oregon's only Heisman finalists before Mariota were quarterback Joey Harrington in 2001 and running back LaMichael James in 2010. For Harrington, Oregon, with Nike's help, put up a billboard in Times Square to promote its Heisman candidate.

"If you have your punch list of things as a program, the most iconic individual award would be the Heisman Trophy. But like Marcus said, I know he'd trade all that to win as a team," Ducks coach Mark Helfrich said.

Oregon didn't need a billboard to get the word out about Mariota. His play provided all the publicity he needed 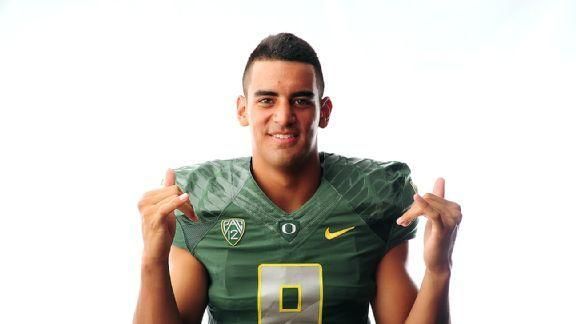 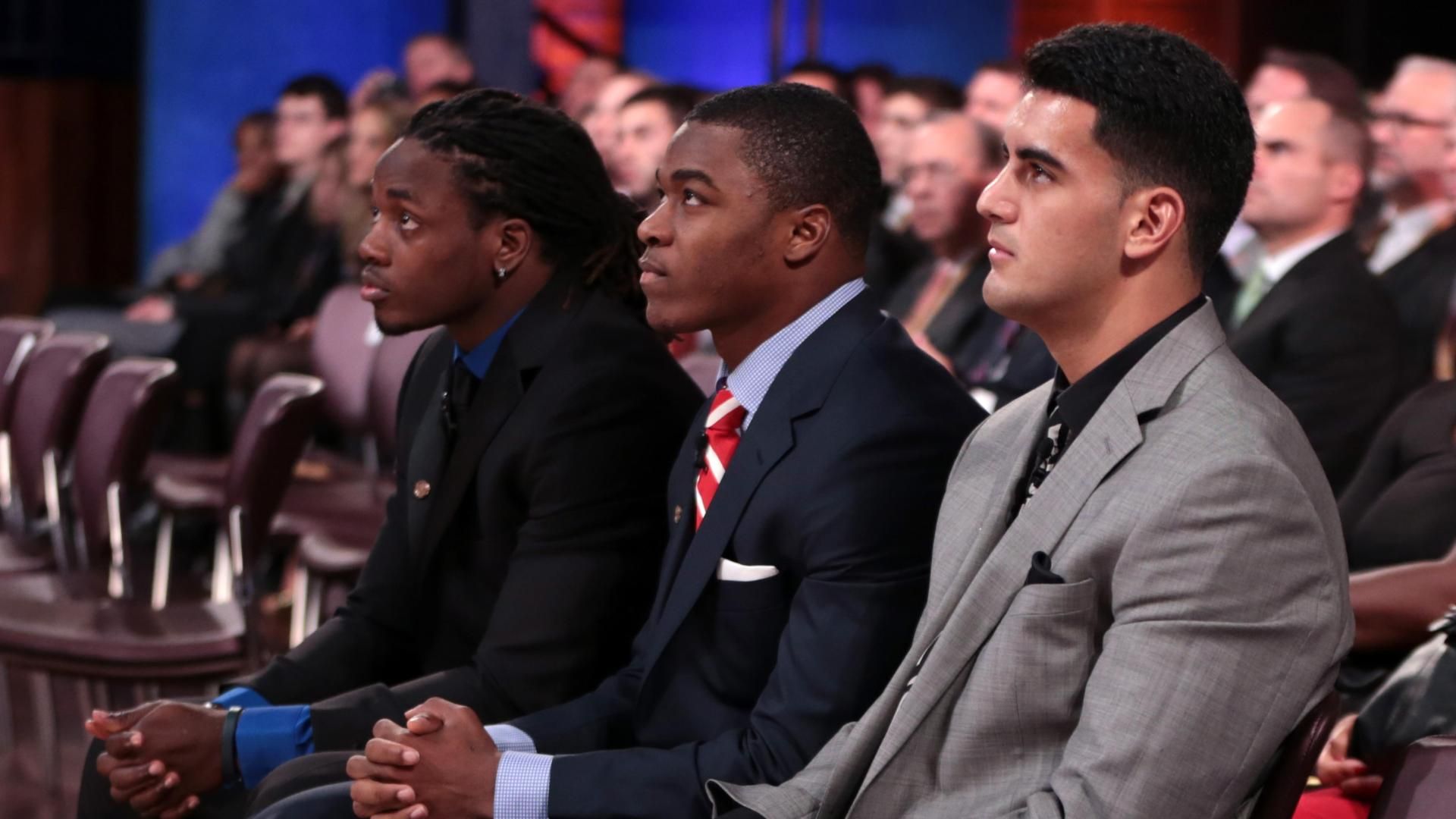