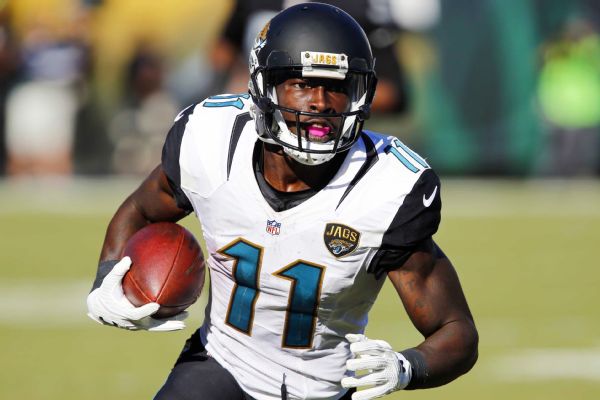 JACKSONVILLE, Fla. -- Jaguars receiver Marqise Lee was penalized for unsportsmanlike conduct during Sunday's 33-16 loss to the Oakland Raiders because he used a racial slur.

"It was back and forth," Lee said. "In the midst of the game, emotion is going from both teams. It just so happened the ref heard me, so therefore I got the flag. I've got to fess up to it."

The penalty occurred late in the third quarter after a 2-yard gain by Jaguars running back T.J. Yeldon. Lee, who went to the sideline very upset after the penalty and had to be calmed down by several teammates, declined to name the Raiders players that used the slur that caused him to respond.

The NFL instituted a rule in 2014 that penalized the use of abusive language, which includes racial slurs. It also includes a fine of more than $11,000.

Lee said he let his emotions get the best of him and added that he didn't harbor any ill will toward the players whom he said used the slur against him.

"Throughout the whole game we had a lot of players saying a lot of different things, but that's just the midst of the game," Lee said. "It's kind of hard when you have refs out there trying to limit what people say when you've got grown men hitting each other. You've got a lot of things that's going on that's flaring as far as in your mind. These 42 [teammates] know as far as the things I said, it wasn't intentional at all.

Lee was one of three Jaguars players who drew penalties because they couldn't control their emotions. Defensive tackle Malik Jackson was ejected early in the fourth quarter after being penalized twice for unsportsmanlike conduct in a four-play span. Cornerback Jalen Ramsey was ejected late in the fourth quarter after getting into an altercation with Raiders receiver Johnny Holton.

Jackson's first unsportsmanlike conduct penalty came after he was flagged for roughing the passer. He disagreed with the call and the referee announced that Jackson used abusive language toward an official.

Four plays later, Jackson was ejected after shoving a Raiders offensive lineman and apparently said something on his way off the field that warranted a penalty. Jackson declined to elaborate on what he said in each instance.

"I disagreed with the [roughing the passer] call but I have to understand that there's a line to toe and they have a job to do," Jackson said. "A lot of things were said. A lot of things happened and I got thrown out as a result. I learned my lesson. I've got to do better for the team and grow up a little bit and can't make mistakes like that.

"The second time it was just the same thing. Just a culmination of the whole day. A lot of things going on and just got frustrated and lost my cool. Can't have that happen."

Ramsey and Holton got into an altercation after Raiders punter Marquette King ran for 27 yards after a bad snap to pick up first down. Both players shoved each other and hit each other in the helmet.

Ramsey said he didn't have any issues with Holton, a rookie receiver who played just five snaps on offense, before that play. "I guarded Amari [Cooper] the entire game," Ramsey said. "Literally the entire game. I played nickel maybe a few snaps but other than that I was always on Amari so I don't know who that dude is."

Jaguars coach Gus Bradley said having two players ejected from the game is unacceptable and he takes it personally.

"That's a reflection of me as a head coach," Bradley said. "It's a reflection of our discipline. It's a reflection of how our culture is and how we talk and how we handle things. That part of it, that hits home with me because obviously it's my responsibility. The demeanor of this team and how we approach things and how we play with poise, I take personal responsibility for that."
Related topics:
sportsespnjacksonville jaguarsmalik jacksonmarqise leenfljalen ramseyoakland raiders
Copyright © 2022 ESPN Internet Ventures. All rights reserved.
TOP STORIES
Blink-182's Travis Barker reportedly hospitalized in LA
Father, 10-year-old son found dead next to car in Chatsworth
Trump WH attorney disputes Hutchinson testimony about handwritten note
Shooting suspect barricaded inside South LA apartment complex
FTC sues Walmart over scammers' use of money transfer services
Giuliani associate to be sentenced for violating campaign finance laws
Source of mysterious lights over San Diego identified
Show More
Biden administration plans to send out thousands of monkeypox vaccines
California gun owners' personal information exposed in data breach
Migrants in search of a better life continue to die on their journeys
SoCal woman opens home to women from other states seeking abortion
Carbon monoxide killed 3 tourists at Bahamas resort, police say
More TOP STORIES News