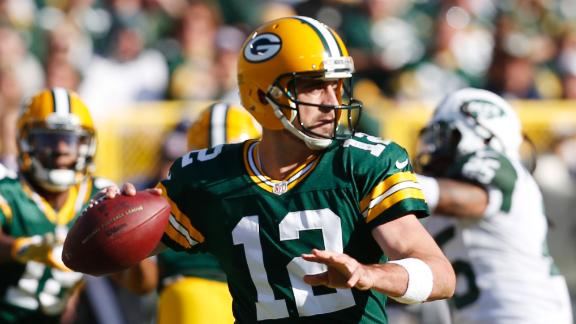 FLORHAM PARK, N.J. -- New York Jets offensive coordinator Marty Mornhinweg expressed regret and accepted blame for a fourth-quarter timeout being called, negating what should have been the game-tying touchdown against the Green Bay Packers on Sunday.

With about five minutes remaining and the Jets trailing 31-24 and facing fourth-and-4 at the Packers' 36-yard-line, Mornhinweg, who liked the play he called, noticed that the offense's formation was "aligned improperly."

A video replay appears to show that running back Bilal Powell was lined up on the left side of quarterback Geno Smith instead of the right side. Smith calmly motioned to Powell to switch sides, which the running back did, but it proved to be too late.

The play clock was winding down, and Mornhinweg began moving toward coach Rex Ryan on the sideline trying to get his attention. But Ryan's headset, Mornhinweg said, was on the defensive channel. The Jets had one timeout left, and Mornhinweg wanted to get the play right.

Defensive end Sheldon Richardson, noticing that Mornhinweg wanted a timeout, yelled into the ear of the official standing along the Jets' sideline. The timeout was granted, but only a couple of players on the field knew.

Smith threw a perfect touchdown pass to receiver Jeremy Kerley, but the play was blown dead. The Jets wound up picking up a first down but failed to reach the end zone and turned the ball over on downs.

"First of all, I want to make it crystal clear everything that goes on offensively is my responsibility, period," Mornhinweg said Monday. "I've got to do a better job of communicating and trusting 'Big Geno.' I've got to trust Geno to get everything fixed before the 40-second [play] clock. That's the scenario. I was surprised the timeout was called."

Mornhinweg acknowledged that he did yell for the timeout, which is why Richardson felt compelled to say something to the official to get his attention.

According to NFL rules, the head coach is the only one on the sideline who is allowed to call timeout. In the event that the play clock is winding down and a snap is imminent, however, the side judge, who is instructed to keep his eyes on the playing field, can grant a timeout if he hears it from the sideline.

Richardson accepted blame for the fiasco, but Mornhinweg said the defensive end was not at fault.

"Sheldon needs to take no accountability for that," Mornhinweg said. "He was only trying to help. It's just that simple. And I want to make sure everything that goes on offensively is my responsibility, so I've got to do a better job with the communication.

"When you're really good, those players [are allowed to] take it and run with it. And so that's what we're looking for, and I've got to be able to allow that to happen."

Ryan felt like everyone had good intentions. It was just a matter of a combination of miscommunication and some bad fortune.

"I think to Sheldon's credit and to everybody's credit really, we just want to win. I think you're caught up in it, and if you think you can help, you react like that," Ryan said.

Ryan said he never saw Mornhinweg try to get his attention for a timeout.

"I heard Sheldon say timeout, but I didn't say a word," Ryan said. "I think it was just a heat of the moment type deal that got called. Because there's times when people are yelling all the time. It's not the first time I've heard somebody yell timeout, because it happens. There's several times. Somebody says timeout and it's like hey you don't call timeout. But that happens more than you think."

Ryan did not want to address the possibility that the snap may have occurred before the timeout was granted because it wasn't going to change the result.

Ryan addressed why he was on the defensive headset.

"I've already talked to Marty, but I'm on the defensive headset talking about preparation in case we don't make the first down and so you're doing that," Ryan said, "and generally the process goes if that is indeed the case it's signaled down to me through the defensive headset from a coach up top. So that's been no different for a long time."

The Jets (1-1) face the Chicago Bears next Monday night at MetLife Stadium.

Packers Rally To Stun Jets
The Packers overcame a 21-3 deficit to defeat the Jets 31-24.